Teno Tenerife, a miracle on top and treasure house under water, merits all kinds of Tenerife tours and day trips.

The Teno rural park is for Tenerife adventure holidays on land and by sea. All kinds of sports and thrills abound. Not to forget Buenavista Golf. But then, there's also the pristine opposite off the beaten track.

This  entire ancient region this jam for researchers is also for the senses, such as good, local cheese and wine.

Besides, not to miss once a year are rare folk dances at El Bailadero 500m above the sea.

Admire the peaceful landscape of El Tanque above, which is known for camel riding...

This mountain range includes the Valle de Arriba. (Valley on Top) Valle de Arriba goes east parallel to the coast as far as Santiago del Teide and Los Gigantes in the west. Note that this country has 7647 hectares of surface and that it does not reach as far as Icod de los Vinos...

Long ago,  volcanic Atlantic ocean eruptions joined three different islands into Tenerife. Those include the mountain range that this article is all about and, today's regions Anaga and the land around Adeje in South Tenerife.

There are Valley de El Palmar at 300 - 500m with much cultural and agricultural interest as well as the hamlets Hamlets Las Lagunetas, las Portelas, las Carrizales by El Palmar

The photo beside shows the land above the most westerly point beyond Los Gigantes. It is also known as Parte Alta (the high part). Ravines with rugged peaks like those of Masca and the cliffs of Los Gigantes with up to 500m height take your breath away. Masca hides behind its
coastal cliffs. Wonder about the fertile Valle de Arriba with Mount Teide further away in the picture background...

Then there is also the lookout El Fraile with views to La Gomera Island (85 km away) and Island La Palma (35 km away). Climbing up to El Fraile is off limits sometimes, though.

Punta Point most westerly coastal outcrop of Tenerife with lighthouse.

Click the photo to see more of an enlarged bird view of the semi-isle Punta de Teno or Teno point...

Tenerife day trips to the whole region but especially to the Punta are a must, provided that there is access. 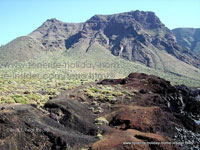 The splendor of the Tenerife Northwest coast shows how very rough, as well as delicate this Tenerife shore line is behind the cliffs of Los Gigantes. There, green is only a feature of Spring time, while no trees are present. It's always surprising to discover very tiny, low growing plants on rocky terrain. A temperate climate of this wonderful microcosm which seldom goes below 15C or, higher than 28C is also the secret to so much living encyclopedia.

More about the endangered Tenerife flora of the region of Buenavista and Santiago del Teide.

Tenerife Almond blossoms are famous further to the east between Santiago del Teide and Arguyaoat. There at an altitude of about 1000m, they grow in abundance. Find them on dark, volcanic soil with nearby Canary Pines. This sets off the delicate pink Almond blooms and virgin green of their leaves to perfection.  Put your name down for the 4,5 hour hike of the photo safari competition by calling 0034 + 922863127/234 before end of January 2013.  Departure place is the Casa del Patio now museum and hotel with horse riding classes.

Lizards dwell everywhere but, not its prize specimen. That's the giant brown spotty lizard Gallotia Intermedia. It was discovered in 1996. It lives in remote nooks where it feels safer from stray cats and big rodents.

The photo with the turquoise sea by César F.Real depicts one of best close-ups of Tenerife rock pools when you click to enlarge. You can spot the ocean with its miniature crevices by pools made by nature with volcanic rocks.

No wonder large underwater caves are there.

Just figure the Octopus hiding in them, while it is ready to attack. Indeed, 836 species of Canary fauna is to be found in these waters out of which 30 are endemic to Tenerife.

The loggerhead turtle called Boba Caretta Caretta in Tenerife is one of the endangered marine creatures by this turquoise sea. However, some of them were resettled in the tiny bay of El Puertito by Adeje. Unfortunately there, crabs may attack their eggs in the sand.

Click to enlarge the photo beside to see an ancient, rustic boat ramp. It isn't the only one by this Westcoast Cap . I may very well have been there for at least 500 years to launch and to retrieve small vessels.

A Holiday home in Tenerife in Isla Baja which is not always easy to get.

Tel:+ 34 922 255836 is a phone number of a Spanish owner with a holiday home in Tenerife Buena Vista del Norte/Teno who lets this Tenerife holiday home. 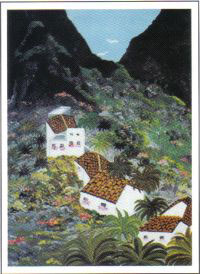 Here is a painting of the most romantic mountain village .

Its link leads to many exciting things to do in connection with this most popular place of Tenerife besides Mount Teide.

The Masca gorge is on every priority list of every adventurous tourist of Tenerife who loves breath taking hikes.

Biking in the Teno Alto

Ride on the most scenic Tenerife mountain road used for endurance cycling from Buenavista del Norte along the look-out Mirador de Baracán past Palmar, Balladeros, Masca and Santiago del Teide to Los Gigantes.

Discover a precious, entrance free natural pool for swimming in an indigenous setting by Los Silos of the region which dates back to Macaronesia.

Unfortunately, the government link I had provided for you to get your camping permit isn't good enough right now.  Kindly,  just do a little trip to the wonderful Plaza de Espana of Santa Cruz and get your permission at the Cabildo de Tenerife (very big building with clock tower) to reserve free camping at Los Pedregales by El Palmar of Teno Alto.

Get to the Pedrigales via the TF 1426 or TF 436 from Buenavista del Norte to El Palmar.
Find a good tourist office for the region on this road near El Palmar for more info on Los Pedrigales.
Otherwise, everything provided online is controversial about its disabled access, showers and bathrooms.