Can endangered, endemic Tenerife flora of Teno be saved? 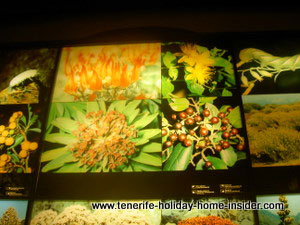 Tenerife flora
Certainly, you were wondering about some endemic Tenerife flora. Most of it is even depicted at the Museum 'Museo del hombre y de la Naturaleza' in the island's capital. Indeed, studying the matter is more than interesting.

What is being done scientifically?

There is a government sponsored herbolarium at the Cultural Park 'Parque Viera y Clavijo' in the Tenerife capital.

Its biologist Mr. Águedo Marrero loves nature walks in the Canary Islands. Occasionally, he spots endemic plants which catch his interest. He collects what is in danger of extinction. This flora will be studied consequently at the institution. It is also tried to reseed some of the samples at the park or in other locations. 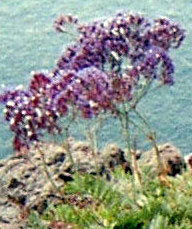 Sea lavender
So far little success has been achieved to grow
any of them in a different spot than in their proper ecosystem.

It was tried with the shrub Siempreviva Sea Lavender (Limonium spectabile).

It only wants to grow in a Masca gorge above the sea.

This herb is extremely endangered.

When you go to the Punta de Diente de Ajo
you will notice a publication by the Tenerife government which points out Teno flora which needs protection. 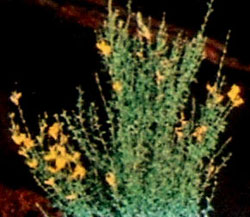 Monk broom
The Monk Broom Retamón de el Fraile (Teline Salsoloides) is a bush that grows by Punta de Teno as well as by the cliffs of 'El Fraile'. This endemic flora is in great perril to disappear.

What about endangered big plants?

It's not the larger and medium sized Tenerife flora which is really jeopardized not in the Teno rural park either.

All these receive much environmental attention already. It's mostly little herbs which are the most vulnerable, though.

Mind that many herbs are not weeds, but are of medicinal interest and healthy to eat. Even, Prince Charles of England has pointed this out, once.

There are many all over Tenerife with healing properties. This includes herbs of the Teno district. We tend to forget that such dainty wonders of biology may be in peril. Their habitat could be easily invaded by men or beast, such as goats. Even little lizards must not be perturbed. They are needed for the plants' ecosystem. They may retreat to safer grounds, you know...

An Asteraceae species which looks almost like the medicinal herb Silybum Marianum. seems to be endemic in the Teno rural park at an altitude of about 500m above the sea. 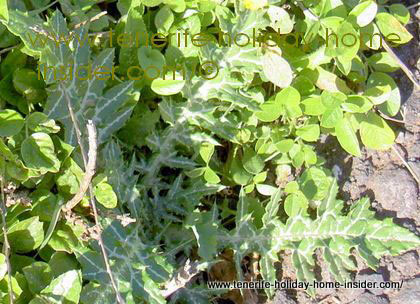 Variegated Thistle
The leaves of this possible Silybum Marianum of a beautifully variegated thistle with white venes belong most probably also to medicinal Tenerife flora of El Bailadero. The leaves are greener, bigger and larger than that of the normal Teno thistle. 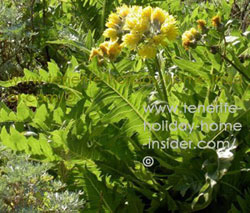 It's also part of the Asteraceae family.

Its big petals are more densely arranged than those of the commercial Aster flower.

Its leaves are of a single grey green color but, show the typical shape like that of
its cousin at the Teno Alto plateau. 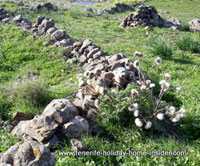 Stone borders
Depicted beside is a simple, but effective method which shows how locals control invasion of livestock by the Bailadero of Teno Alto.

The stone borders are signal for trained dogs.
It tells them where goats may or may not go to feed.

Many pastures have wire fences in this location,
as well.

The Col de Risco which means Cliff Cabage (Crambe Laevigatae) is a herb on the list of doomed Tenerife flora of the Teno region. Its habitat is in Laurisilva forests, such as the Teno's. Both Laurisilva and Col de Risco in its undergrowth may be much harmed by Tenerife wildfires and or corrosion of the soil.

The Laurel trees of the forests of Monte del Agua in the Teno Massif have been more and more threatened by fire, such as in 2012. Rising temperatures during hot summers add to the risk. Endemic herbs on the bottom of the trees have been equally in danger, while most of them may have been around in the Tertiary period, already. Laurisilva was much at home all over the Mediterraneum and North Africa, not that long ago. The isolation of the Canary Islands which were even ignored by the Romans were a blessing for its flora.

However, Tenerife is not isolated any more due to millions of tourists.

Proper endemic Tenerife pines are fire resistant to a great extent, contrary to Laurel trees which are indirectly harmed after fires by too much light and sun. This concerns above all the lower regions near the bottom of the tree trunks.

By the way, this article warns of all danger to all Canary Island plants, while only some of their endemic cousins were given as an example.

What about the Canarina Canariensis?

The Canarina the beautiful endemic Bellflower also known as Campanilla is not in danger. It has tubers underground that are protected by earth and will always sprout again after fires.

From Tenerife flora back to Teno the Northwest Tenerife rural park

People who are interested in the environment also want to know about Tenerife animals and birds in danger of extinction.