In July 2016, about eight meters of the TF 445 crashed into the gorge on the roadside by the lookout La Cascada. 174 persons were stranded. The last of were taken to safety by helicopters at two at night on July 13th. It was another mission to salvage the vehicles and cars of the people.

More information in Spanish with photo by El Opinion on July 13th, 2016.

The damage is now repaired.

A new regulation of January 2017 was implemented after a referendum. The road can be used again except on weekend and holidays. Now, Euro 2 buy you a shuttle bus return ticket from Buenavista del Norte to Punta del Teide.

This road had been repaired before for 1,4 million Euros, as it had been off limits between September 2013 and July 27 of 2015. 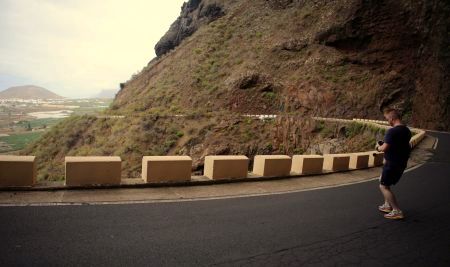 Punta de Teno Road at the dangerous abyss by Mirador la Monja in 2013.
Depicted is a dangerous spot by the Mirador (look-out) de la Monja. Now, a 15m long mini-tunnel keeps motorists safe there from falling debris by the wayside.

Another has been added in addition to the main one which needed lighting.

Last not least, the hazard of falling basalt from the steep hills by the winding road could be dealt with to guaranty 70 % of driving safety for sober drivers.

How were the slopes netted?

It was done by helicopters.

Also, while most big pot holes in the motorway pavement have been repaired, some tracks still need to be fixed.

Watchful driving not to stop

Therefor, care needs to be taken while road works go on as well as on stormy days. Then, this coastal motorway may be temporarily off limits again.

Up to the end of July 2015, only coastal farm workers could enter to get to surrounding coastal farms.

In fact, the tomato and banana cultivation below the controversial TF 445 is very labor intensive.

Some changes for more safety to the 1km long scary tunnel of the Punta de Teno road seem to have been finished.

Was it that scary?

Well, that is in the eye of the beholder.

It was best to see it all as a thrilling track by a 20 minute adventure drive from Buenavista del Norte for a day in the sun. 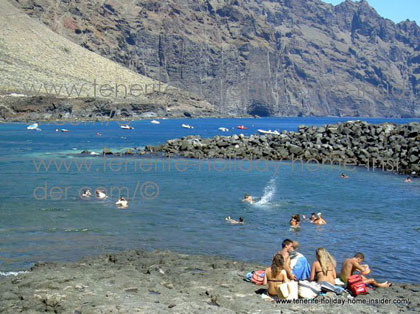 Punta de Teno for swimming, diving and snorkeling.
Indeed, the most popular bay behind Los Gigantes by the Faro Teno lighthouse is usually always sunny.

A friend of mine together with a group of hikers sneaked into the cordoned off Teno area beyond the closing beam on January 01,2014. Later, they left their vehicles by a farm worker parking ground. The trespassers continued to Punta de Teno on foot. The area by the light house looked deserted except for two lone fishermen. These locals told them that six people had already been fined with €3000 each for trespassing. Some of the culprits were walkers. My friend and his companions rushed back, almost in panic. They were lucky that it was New Years day. All patrol men who guard the forbidden way to Teno Faro normally seemed to be at home celebrating.

By the way, this controversial matter of a so called dangerous Tenerife road had made headlines in many different contexts of Spanish news from September until the day of closure on October 02, 2013. Just figure how involved an issue it had become...

The list could go on and on, as the road access to Tenerife's most westerly point has been one of the most delicate points to deal with.

In 2015, news were published that road works were about to start to remedy everything. But the rainy winter of early 2015 may have been another obstacle.

How else get to the Teno lighthouse paradise oasis?

Yes, more than one road leads to Rome or in this case to a very popular Teno spot.

Get there by hiking down the Teno mountains or reach it by Los Gigantes boat trips.

From Punta de Teno road back to Teno the region

Media disclosure about reopening of Carretera TF445 to the Teno light house.