What does the Spa Hotel Botanico have to do with distance London to Bangkok? 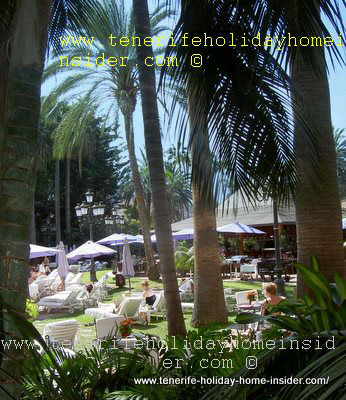 In fact, the Spa Hotel Hotel Botanico of Puerto de la Cruz is about 2926 km or 1818 miles of flight distance away from the UK capital, while it takes 9544 km or 5930 miles from London to the main Thai city.

That also means in 2011 that your flight to Tenerife will only take about 4,5 hours from most British cities to reach authentic Spa treatments with a Thai theme.

A Thai lady whom I have known for quite a while gives massage there. Her name is Tui. I remember German lady friends who mentioned how very skilled Tui is. You shall be in excellent hands. Tui speaks fluent German, by the way.

The oriental Spa hotel is brimming with more Thai features. They will follow just now. 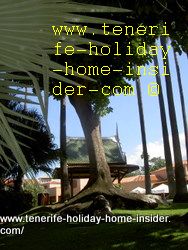 Admire the serene Botanico hotel garden of the Oriental Spa. It almost looks like being in a an oriental garden with Japonese flair. Meantime, it has all the advantages of a secluded tucked away park.

There, nature harmonizes with peace in unspoiled timeless surroundings.

A separate hotel swimming pool is close behind the treatment pavillon which detect behind a mature old tree. 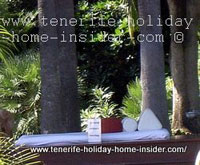 Thai massage by Thai customs at the Spa hotel

Figure yourself getting pampered for total well-being within the open Thai temple surrounded by tropical plants. Make this experience all yours in such luxury set-up for a Shiatsu Thai massage. as is portrayed beside.

Indeed, the Tenerife Spa Hotel Botanico follows Thai customs in many ways.  Oriental massage, such as Shiatsu is done by highly qualified staff. This finger or palm massage is always preferred to the body treatments which are rendered by most Western health care services. 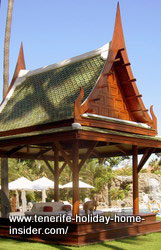 Meditate by the Thai temple, where you are not likely to be disturbed by children or noisy tourists. Take a Japanese sauna with oriental etiquette. This is another plus at the Spa hotel Botanico. Aromatic sachets and oils which are used in this spa are often based on herbal ingredients. Therapies outside as well as meditation and much swimming are encouraged. The oriental gardens with subtropical Thai landscaping, swimming pools and the Siam Pagoda invite to all of it. The Thai lake with Koi carps would have pleased the French impressionist Monet, as he would have seen there almost a replica of his oriental bridge.

Discover more of the Spa Hotel Botanico Tenerife services which include Thai Chi. This spa recluse doesn't only have weight loss programs or special diets to suit your wishes. Eat at its Thai restaurant or savor varied international cuisine. Work out with its heart healthy fitness center classes. Also enjoy free Wifi in its lobby and celebrate your vacations in a Thai oasis which is ideal to practice Yoga. All this is possible within a 3500 square meter park with Thai landscaping design. Socialize there while lunching and dining al fresco. Indeed, the best Spain hotel of Tenerife's oldest resort has so much in stock for you, that it is sheer impossible to note it all in here. Accordingly, more links will inform you just now. 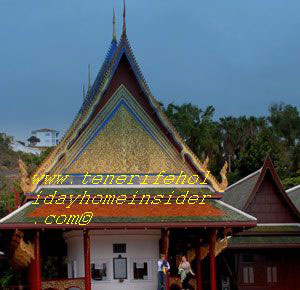 The Botanico wellness hotel's temples are very similar to the ones at Thai temple of the Loro Parque. All came into being thanks to his and her Royal Highness of Thailand who have a historical reason to be fond of health treatments of spas.

As mentioned before, this 5 star Puerto de la Cruz wellness resort also offers you help with your diet and may advice you on other well being and beauty treatments, provided you ask. Even a total make-over to be gained during a short holiday is possible at this spa.

By the way, this Botanico hotel which has 25000 m2 of grounds is in an excellent neighborhood. It virtually forms a triangle with the oldest Tenerife park Parque Jardín Botánico, the shopping mall La Cupula and a luxury Spar supermarket whose name keeps on changing.

The sweet Colonial enclave called Canary center opposite the Botanico Hotel Tenerife is full of shopping surprises and more. It even has a Russian speaking medical GP and Sports doctor from Ukrainia by the name of Sergej Rudenko. Ask for him at Tel: 0034 + 922385159.

The hotel is by a palm lined avenue which leads almost straight to the closeby Freeway TF5. From there it's 25 km to the airport Tenerife North. Expect about 40 km from the Botanico oasis of a Spa to the Teide National Park with its Canadas crater...

Take a leisure walk downtown via the steps of the Calzada Martianez to the hub and beachfront of Agatha Christi and Hemingway's beloved Tenerife resort.

There the Lago Lago Martianez Tenerife saltwater pools with their previous underground casino below an enormous fountain are less than 2 km away.

Links to History of Spa Hotel Botanico and more services

Learn how the wellness hotel is proud of being one of venerable hotels of Tenerife, while it's not even old. It started off with only 12 rooms in the early Seventies, as a birdy whispered at Loro Park during studies behind the scenes.

This luxury Botanico hotel which is best of all hotels of Puerto de la Cruz became big and added the Spa Hotel crown after an astronomy event in la Paz in 1985.

By the way, no pets are allowed at the luxury Hotel of Spa gardens of Puerto de la Cruz of the biggest Canary Island.

See more photos which may include Bill Clinton or Michael Jackson's luxury suite ot the 5 star Botanico Hotel La Paz of Puerto Cruz. Needless to say is that there are top conference facilities as well.

More about the town Puerto de la Cruz of the Spa Botanico hotel by a Wikipedia article here.

From spa hotel back to hotels in Tenerife, where not only Puerto de la Cruz is proud to offer wellness treatments for tourists and residents alike.