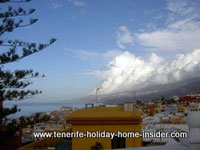 Spend Tenerife vacations in Puerto de la Cruz hotels under the most romantic clouds, gordeous sun and a general temperature of fortunate 17 to 26 degrees. Actually up to 30 degrees, off lately. Enjoy this town, where a mood for celebrations is not only felt during its many festivals.

A vibrant flair prevails. Everybody finds its niche
in this liberal environment, where the amount of hotel beds is incredible in relation to the town space. However, even those countless visitors that cannot afford one, are not looked down upon.

The family run almost legendary establishment Hotel Tigaiga of Park of Taoro has its own interesting botanical garden with categorized plants. Its founder even received a monument in the nearby park. 70 Germans and some Scandinavians were honored at Hotel Tigaiga a few years ago. They have been faithful returning guest for more than 20 years. Hence, perhaps not ideal for British people who want to hear English only... 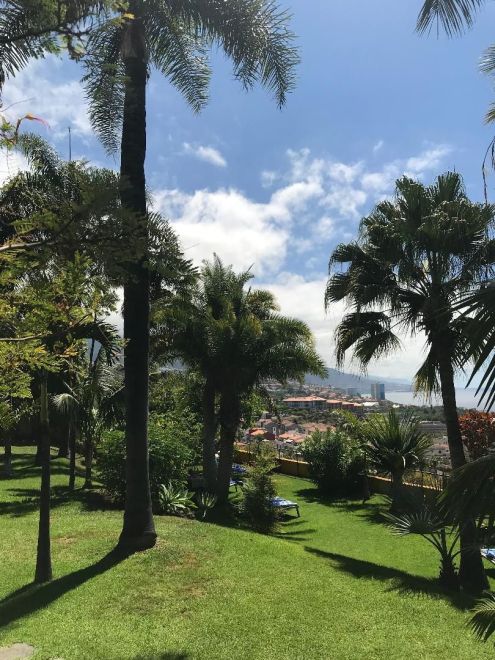 The former Taoro Hotel is very famous already. The town jugglers in politics want it to have a comeback. But the talk about a revival has remained just that.

Once, not long ago, there were over 100 thriving hotels and holiday apartment blocks in the oldest Tenerife resort. The last of over 20 shut their doors by summer 2014. Some of them are expected to have a come back, such as Hotel Chiripa.

Apartamentos Florida are near the Puerto Cruz former station and about 10 minutes on foot from the Hub Plaza del Charco. Staying over at the apartments is fairly cheap. However, it is difficult to get a reservation as, they are often booked out. Mind that those are not the same as Apartamentos Florida Plaza.

Two Japanese girls from London were lucky to book at Apartments Florida in 2011. They selected them for being near their the public buses to join a walking club for Tenerife. Ten minutes on foot take you to the hanging gardens of Playa Jardin and another 10 in opposite direction to Lago Martianez.

Most Puerto de la Cruz hotels come as sky scrapers. High accommodation demand warranted them in the roaring Seventies. Then, Tenerife tourism made quantum leaps in the north. Later, parts of them were turned into self catering Tenerife studios and were sold off to private buyers. They filled an important gap in the market until 2008.

Best examples for self catering are 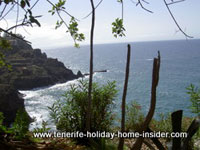 This hotel which has a medical service and one of most stunning suptropical parks of the region. A local diving club with some English speaking coaches meets at Hotel Maritim Tenerife.

The Spa Hotel Botanico is justly classed as one of world best 5 star hotels. It is not meant for unruly children but gives one of best services for youngsters. Check out its Botanico summer camp activities which may only be continued when demand permits.

A cheaper alternative by 4 star hotels for family fun activities is the Playa Jardin Beach Hotel Turquesa of Puerto de la Cruz hotels, as is mentioned above. It has a small children play area and kiddy pool. However personally, I don't like it when Internet is not free in a 4star hotel and wouldn't recommend it for that reason. Its address is:
Calle Antonio Ruiz Alvarez, 7,
38400 Puerto de la Cruz,
Santa Cruz de Tenerife - Spain
Tel: 0034 + 922 37 13 08

A very important outlook for all accommodation in the region is:
La Orotava will have its very own university in not so distant future.

This fact will attract more academics and the parents of young people who will study there. It will be worth it to upgrade hotels in the whole region which includes Puerto de la Cruz the town with a tourism university. That's why buy Tenerife property now, while it is still cheap, as demand is bound to rise.

From Puerto de la Cruz hotels back to hotels of Tenerife North and South many of which are in good locations for child and toddler vacations.