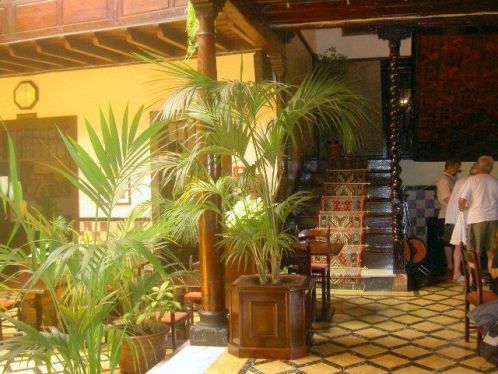 Hotel Marquesa with former charming look that was abandoned in time in the year 2016.

Since 2008,   mostly Tenerife North has been in an economic recession after its construction industry collapsed. The latter has been looking for work with a keen eye on all hotels in Puerto de la Cruz.  Hence, it's very likely that the hotel was told that the big lateral step in its lobby is a safety hazard for pedestrians. Hence,  the breath taking antique floor tiles were removed and replaced with new dark ones. Now, the lobby has a very somber look. A tragedy, indeed...

Some of the hotel's amenities. 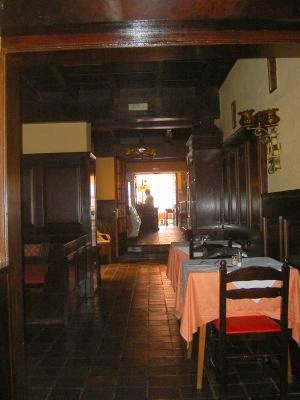 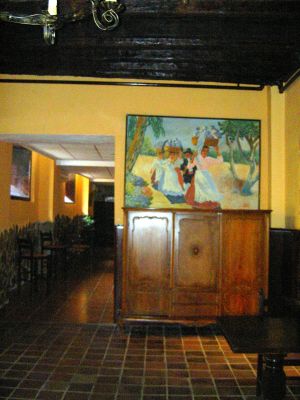 The hotel which was built as a mansion for the Valois family has now more than 130 bedrooms with bath en-suite, more than one bar and dining room and many drawing chambers of all sorts. The main house is a double story with ancient timber balconies. Taller houses with simpler facades are behind it. The complex comprises 1230 square meters with porches and patios. The builder the Irish businessman Bernard Walsh (Valois) didn't spare any expense for quality materials which cost him 120000 Reales from 1712 onward. A rooftop swimming pool as well as a gymnasium were added later.

The bedrooms are not much different from those of other 3 star hotels of North European tourist hubs. In fact, I have seen much, much smaller ones for the general price that's asked below €50 in high season and considering the absolutely superb location of the hotel.  Of course, some rooms are bigger than others but may be booked long in advance at special conditions. 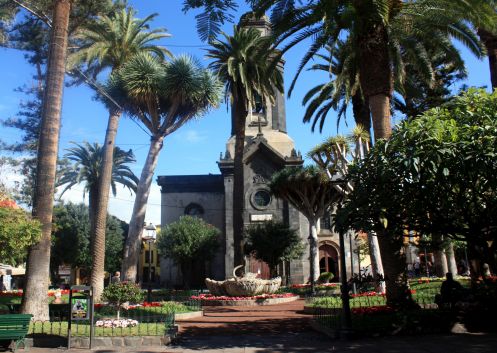 Some look out over clay tiled roof tops with a bit of ocean on the horizon. Others let you discover Mount Teide or just the beautiful town square Plaza de La Iglesia de Nuestra Señora de Peña Francia opposite this oldest Puerto de la Cruz hotel.

The 2016 renovations and novelties of Hotel Marquesa of Tenerife. 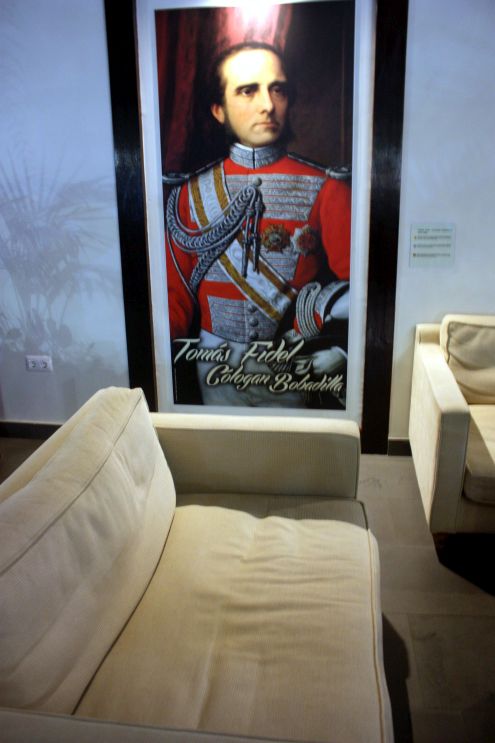 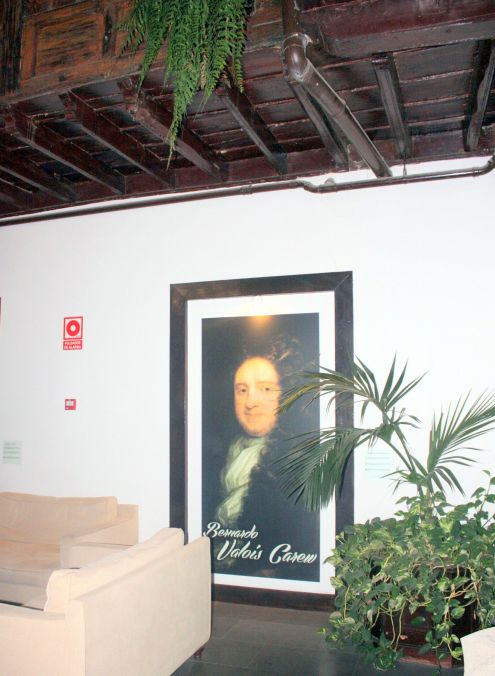 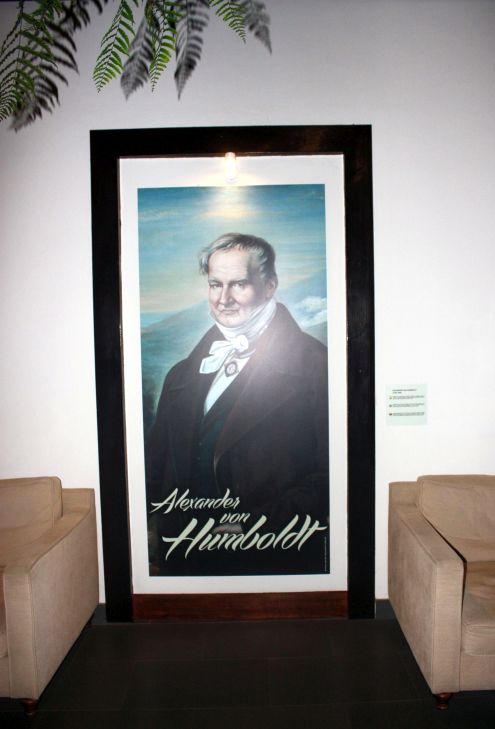 A little Tenerife tourism and hotel Marquesa history in this context.

The spouse of Don Tómas Fídel the Marquesa de la Candia became the reason for the name of this hotel in Calle Quintana 11. However, her husband started the hotel business by letting the premises out with rock stock and barrel to the firm "Hoteles y Sanatorium del Valle de La Orotava".  This was one year before his death in 1887 when the Marquesa slowly started to handle the hotel  administration. Hence, the hotel celebrated its proper first 100 year anniversary in 1987. 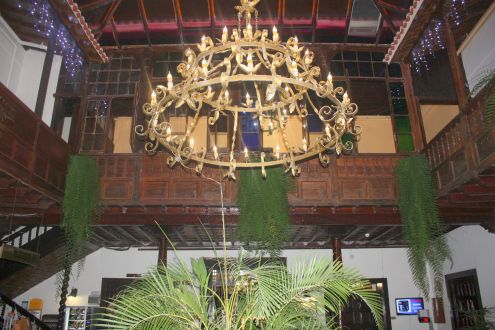 The wood panels of the antique indoor balconies of the first floor gallery don't show multiple layers of heaped up,  old varnish any more. Not on the outside balconies either, by the way...  But as said before, the priceless, antique floor tiles that I spotted in 2001 are gone now.  We may ask: "Why and where did they go?" 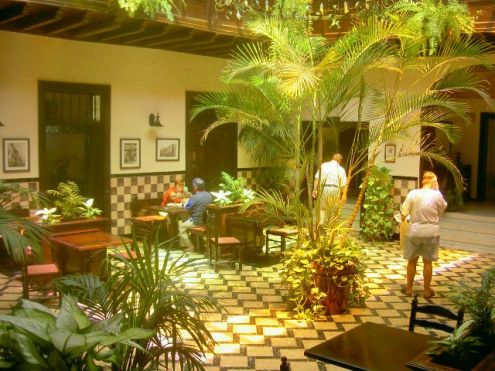 Lobby with antique floor tiles and by gone charm. 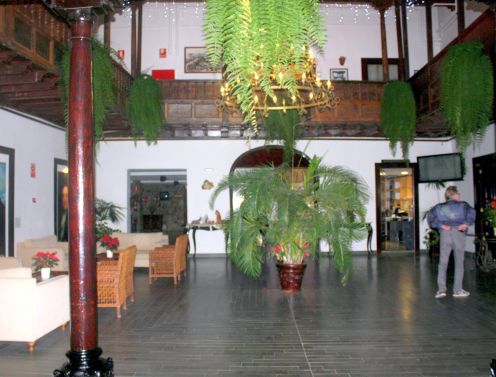 Revamped Marquesa lobby in 2017 with a changed floor that absorbs the light from the sky.

Such a removal is a great shame in my mind.

The hotel's dining rooms, bars and all other amenities were dolled up.

Of course there as well, much of the ancient character and charm has gone with the wind.

The roof swimming pool location is an improvement, though.

So are the modernized bedrooms, as I've been told.

However, no more antique ornaments, sculptures and smaller pictures may delight lovers of antiques. Nothing of museum value that went as far back as 300 years is on display any more,  except very big paintings. These remnants of the past revealed much history of the town which find here.

What about food at this economical Tenerife hotel ?

Don't expect the impossible from an optional 3 star buffet cuisine.

It's of a mix of International and Mediterranean style without any fancy sauces. You may discover a fish and chips option. Then there may be chicken, roast i.e.fried beef or pork, baked potatoes, rice and perhaps a pasta salad. There may be chick or green peas. Cooked or steamed vegetables are seldom seen.  Salads are pretty standard with a 3 star choice. One or two desserts and fresh fruit are the norm.

Cheap olive oil,  economical vinegar and ketchup are usually offered for extra seasoning. What I personally hate most with Tenerife 3 star self service hotel buffets are the continental breakfasts. There, stale cheese and poor choice, excels in general. 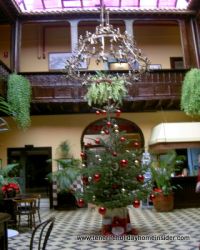 Christmas tree in the Marquesa hotel lobby in 2011.

Christmas Eve dinners at the Marquesa.

Here, this downtown hotel is convenient for about € 10 to €15 when more than 95% of all restaurants are closed. What's open may be too expensive for your budget. Hotels with 4 and 5 stars may ask about € 50 and more and may still close kitchen early.

Wifi in its public places is available. However, an Internet cafe is almost over the road from the hotel behind the church park. 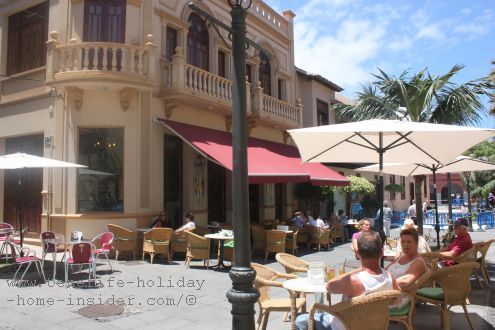 Not to forget is the charming Café Ebano. Where? Behind the church, just a few paces from the hotel.

Review of 2008 by repeat visitor from way back.

The antique Hotel Marquesa which means Hotel Marchioness was exactly what my friend Ivor Alexander wanted for nostalgic, romantic holidays in Tenerife in November 2008.

He was not interested in renting a private holiday home in Tenerife.  He had spent wonderful family holidays at the Marquesa, as he put it,  55 years ago. 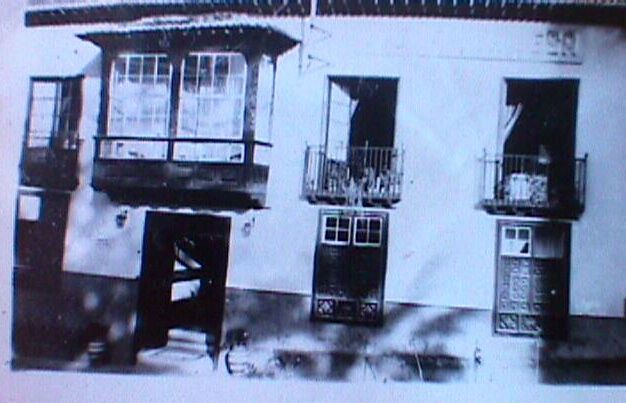 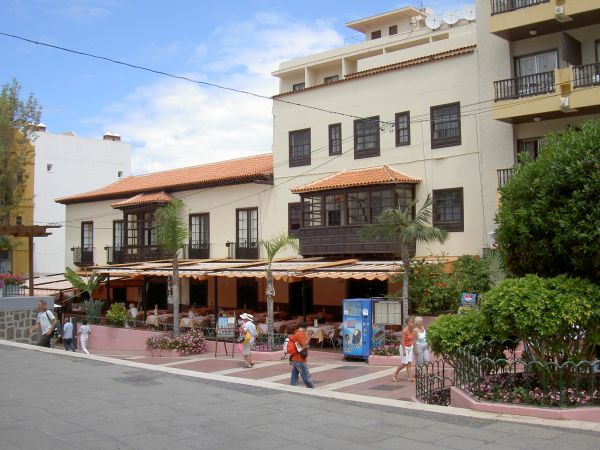 Marquesa Hotel Tenerife in the year 2002. 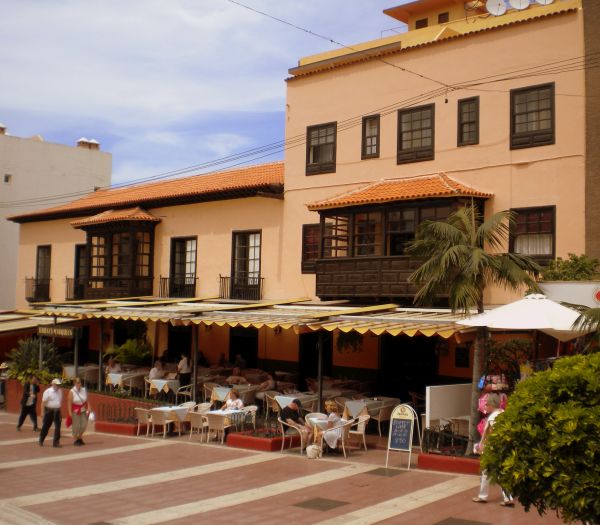 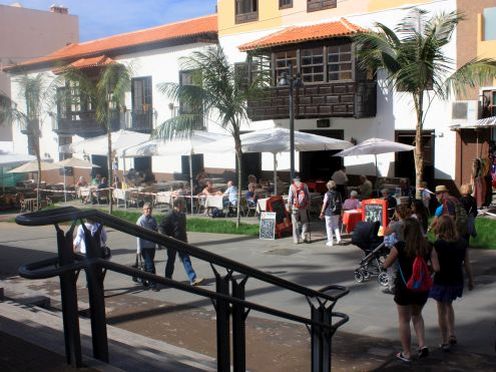 Ivor Alexander was happy to hear about a hotel novelty that had been unknown to him.  Its rooftop swimming pool...

However later,  he wasn't so thrilled with its water temperature.

Now in 2017, it's even revamped but hardly warmer than before. 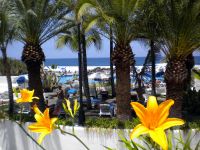 Never mind, as there are beaches as well as  the San Telmo seaside for snorkling  nearby.

Not to forget a few hundred meters from the hotel is a heated pool at the fantastic Lido Lago Martianez,  although not free to enter.

The entrance hall of the former aristocrat mansion.

In 2008, Ivor found the Marquesa Hotel lobby with the antique stairway carpet and the welcoming reception desk almost exactly, as he remembered it. 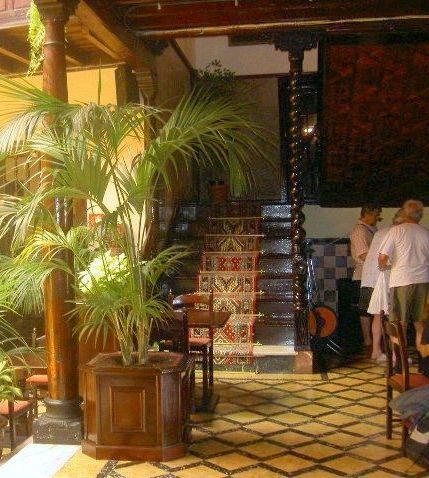 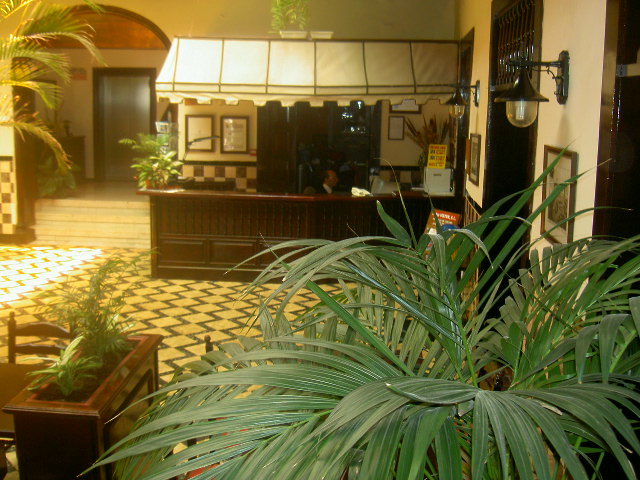 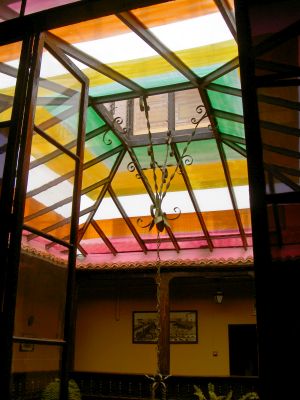 All was bathed in an alluring light which came from the masterpiece skylight on top.

A hotel bar or a museum? 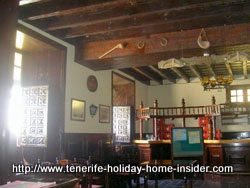 The rooms around Hotel Marquesa's patio included a chamber with an antique bar.  I found it totally changed in 2016,  already. It had no more antiquities. Before, ancient farm house style gadgets hung down from age old Canary Pine timber beams. They were made of clay,  timber, copper and brass. The unusual bar counter was carved of wood. A rare light fitting hung from the ceiling. Incoming street light came through slightly open window shutters. They were intricately carved. The room was crowded with old, wooden chairs and tables in front of the bar. 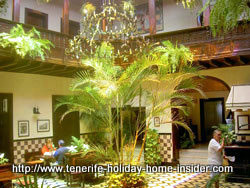 Former antique lobby whose big chandelier is still there in 2017.

One of very enchanting, middle size Tenerife hotels up until 2008.

Ivor still encountered the nostalgic flair he had remembered.  Utterly charming, so to speak... There were masses of plants, big palms, ferns and a huge, beautiful chandelier above it all...  Ancient middle brown and white floor tiles gave depth to this marvelous interior, where the sun seemed to dance.

The same tiles were on the wall. There, they reached a height of about a meter. This ceramic wall decoration had a subdued affect and, protected and enlarged the area, artificially.

The only ground floor room, which was not as authentic as in the past, was the hotel buffet restaurant. Buffet furniture always has a rather practical appeal. On his first Puerto Cruz holiday evening, we strolled through this large room, where part of the sitting area was arranged around pillars or in nooks for more privacy. The place was full with tourists. Therefore to judge by the good attendance, food and drink can't have been bad at this venerable hotel. But Ivor preferred to eat out, as couldn't have a butler or waiter to serve him at the Marquesa's hotel.

Ivor told me that his room with bathroom attached had all that he needed and had a good bed. He found furniture and decor disappointing in both, as it didn't match the rest of the hotel.  Ivor hinted that this was to prevent tourists from hiding antique valuables from bedrooms in their suitcases. 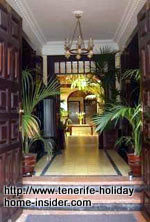 On one night, Ivor and I enjoyed a long drink on the veranda by the Marquesa entrance door in Calle Quintana. 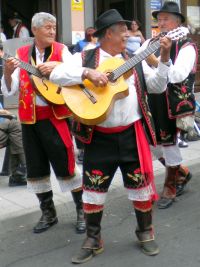 Tenerife folk musicians that are dressed the part.

Folk musicians that were dressed the part walked along. A group of students stopped and sang Christmas carols for us. Later on the terrace, a guitar player together with a singing companion were performing for the hotel guests. Needless to say, Ivor liked his vacation very much.  There couldn't be a better place to go back memory lane  than this. The best Puerto Cruz winter holiday feel came free on the house from the street terrace of the Marquesa Hotel. It still does, by the way.

Will Ivor, my friend, come back to Hotel Marquesa? It's very possible, unless he really wants a total hotel change and insists on one, where the pool's water is warmer.

My Irish writer friend will definitely come back to Puerto de la Cruz. He said so. After all, he liked the food at Restaurante Los Gemelos as well as the Year 2007 Tajinaste red wine.  Find this restaurant about 10 minutes on foot from Hotel Marquesa.

Bad news of 2016, by the way.  My friend Ivor Alexander the writer is unlikely to return. He seems to have passed away and can't be found anywhere any more.

Want to know where the expression Marchioness or Marquesa comes from?

Back from Hotel Marquesa to Puerto de la Cruz hotels.