There are not many historic hotels in Tenerife. After all, the biggest of all Canary Islands only dates back about 300 years to 1695. Then, international travelers were never charged for sleeping over in what are today's hotels on the island of Mount Teide, depicted below.

Some of the historic hotels of the island of Tenerife Teide and the former Guanches are not old.

However, they made history because of the guests who were happy there.

However, there are some rather ancient inns too. The Hacienda La Pared of the old Camino Real Tenerife Kings highway was a famous one. However, the only restored historical farmstead which became hotel is Casa del Patio. Learn more about Casa del Patio Hotel by Los Gigantes for horse riding and more. 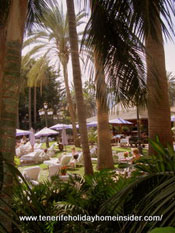 This Puerto Cruz elite hotel is certainly the most historic 5 star accommodation which is most talked about abroad.

Learn more about this venerable Puerto Cruz 5 star hotel and other memorable, historic hotels which are all part of our recommended Puerto de la Cruz Hotel accommodation. 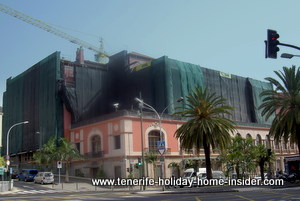 Only Hotel Iberostar Mencey is worth mentioning under Tenerife hotels with history of the Santa Cruz capital.
This monumental tourist complex with casino has undergone a total hotel renovation of 6 months in 2010. It looks worthy of a 5 star again and is proud to have stood the test of time.

It was named in honor of the last king of Tenerife Guanches which was a Mencey. It is right opposite one of the world's most beautiful subtropical parks Parque Garcia Sanabria and beside one of Spain's most stunning Avenues, called now Rambla Santa Cruz.

It also replaced the old Hotel Quisisana with its Victorian interior, eventually.

Admire an external photo of the Quisisana hotel, where it is mentioned under Spanish style architecture of Tenerife together with a famous Costa Adeje holiday resort.

What about hotels with history in South Tenerife?

Needless to say is that there are fabulous hotel resorts and hotels in Tenerife south. However, they are too young to be listed under hotels with history but, their time will come. 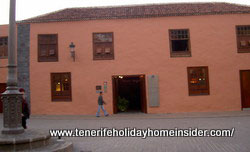 The ancient picture book town Garachico with its ultra modern yacht harbor has one of oldest Tenerife hotels. It's the amazingly well revamped, romantic Quinta Roja Hotel which is at three minutes on foot from the hamlet's unusual water front with castle, for eating out with views and for shopping.

The Taoro Hotel which has been around for almost 150 years as first major tourist resort of Tenerife has not been as lucky as the capital's Mencey Hotel. Hotel Taoro burned down once, was rebuilt and even ended up as Tenerife's main casino. Now it's not used for anything. It was supposed to become the administrative Tenerife head office of volcanology but nothing happened so far. Why? Blame the Spanish Recession which started in 2008...

The Rural Hotel Victoria of the old quarters of La Orotava is classified historic. It is a mere 15 minutes drive from Puerto de la Cruz. This Hotel Victoria of Orotava which gives tribute to a historic past is still going strong by good reviews for honeymoons, romantic holidays and more.

From historic hotels back to hotels Tenerife