Is this red dragonfly a red veined darter of Tenerife? 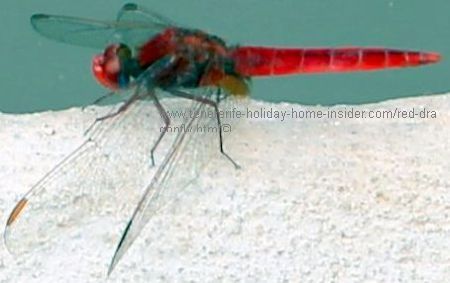 Clearly, this red dragonfly cannot be the Red veined darter ?

However, it is the one. It is the Sympretrum Fonscolombii.

Optical illusion... The yellow patch only looks like an abdominal attachment which had caused doubts regarding its name. In fact, the yellow coloring on the base of the hind-wing is typical for the flying darter bug.

The image of a gliding dragonfly where yellow stripes are present is another visual illusion that came about due to high noon light conditions at the same environment of the Jardin Botanico Puerto de la Cruz Spain. 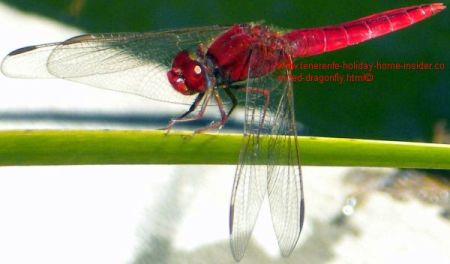 A red veined darter or a Scarlet dragonfly ?

This image above depicts the same glider insect as before. Now, notice that it is a typical male of a red veined darter. Now, it perches on a reed contrary to its brothers who normally sit on the edge of the pool. Its hairy, fairly dark legs cling to a very smooth surface.

Definitely, it's not the Broad dragonfly, Crimson Darter, Skimmer or Scarlet Cothemis erythraea, albeit widely spread in Northern Africa which is so close to Tenerife Island. Scarlet dragonflies don't have black legs and dark patches on their head. 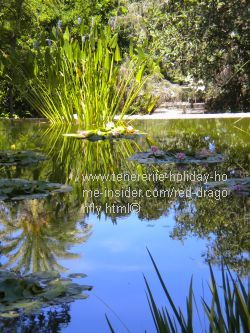 Feeding and breeding habits of the red dragonfly

It consumes smaller insects, such as mosquitoes, flies and ants but, may even attack a spider or wasp.

Perhaps, it feeds on its own nymphs (larvae) when need be.

However, perhaps not at its best dragonfly habitat at the best of all Tenerife botanical gardens in the oldest resort of the island.

Its pond which is shown beside is an absolute water paradise for dragonfly nymphs.

Normally, the larvae of the red insects thrive ideally in this dragonfly enclave amongst sea roses, lush bushes of water lilies and papyrus of the depicted Botanico garden's pond.

Of course, there should be no reason to leave that perfect insect haven at the Puerto Cruz Jardin Botánico park.

They have been traced as far as the Southern UK.

Mind that the eggs of the those so called 'nomads' that fly abroad may perish in ocean salt water on a migration trip. Then the insects breed again at destination.

By the way, they often mate in tandem mode above any water.

Amazing multifunctional skills of all dragonflies

I don't remember the color of pretty dragonflies that at first scared me much by our ZA swimming pool. They arrived in a flash, flew very low at high speed and skimmed the water for bugs that fell from our nearby Maple trees. However, our Durban dragonflies never collided with my splashing kids or with me. Now, I know that an amazing brain in their large insect heads lets them multifunction several tasks. There, bees had to be saved from drowning but, never the blue or red dragonfly. Meantime, my little son called the insects helicopters when they flew straight up from the rim of the pool. 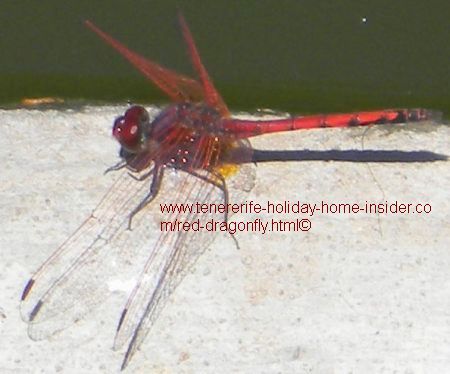 Does this strange picture depict a mating of a more than red dragonfly where an insect with more orange coloring seems to be behind it? Of course again, the summer sun may have reproduced something peculiar here. Perhaps, light and shade by this amazingly clear pool play their tricks one more time.

Depicted below is part of Jardin Botánico's amazing woodland. 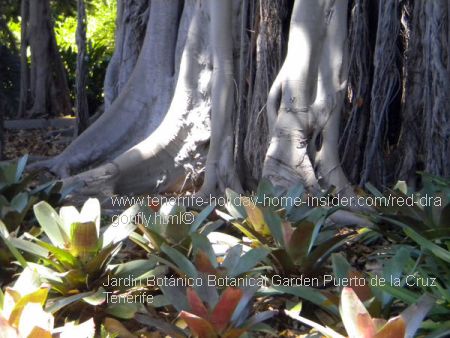 It may offer itself as ideal habitat for female dragonflies. Why? They like to hide away from the male colony and only show themselves when they want to mate. Also, there are Bromeliads, as shown above. They are always filled with water at the man made oasis Jardin Botanico of Puerto de la Cruz. The red dragonfly loves that as a feeding ground, too.

About the red veined darter by Wikipedia?

From red dragonfly back to Tenerife wildlife