What's the puzzle and news with this biggest Ficus Macrophylla ssp columnaris? 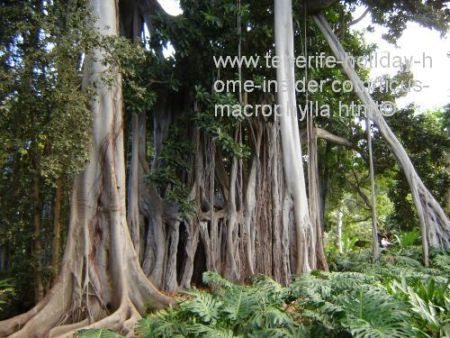 Ficus macrophylla a ssp columnaris
This Ficus Macrophylla is different. It's like a huge grove of fig trees. An illusion, though. All come from one tree.

There seems to be an entrance in this jungle of trunks. Don't enter... Standing closer, one gets the impression of facing a Gothic temple with many columns. Hence the name 'columnaris'. 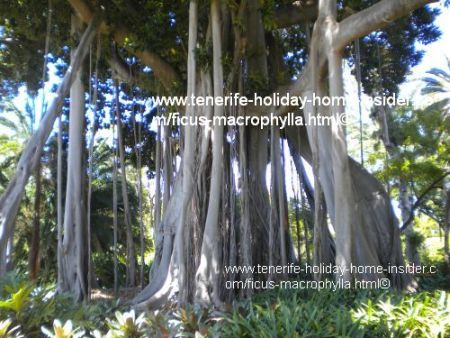 Depicted are the many fig columns of the oldest Banyan type fig in Europe at the Tenerife botanical gardens of Puerto de la Cruz. 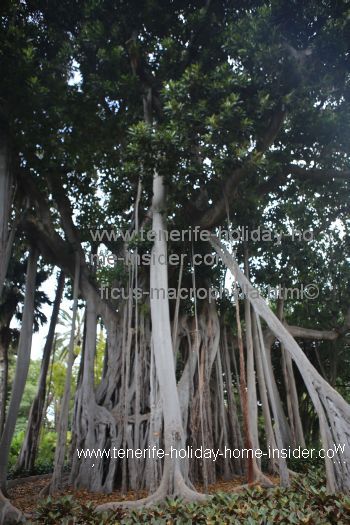 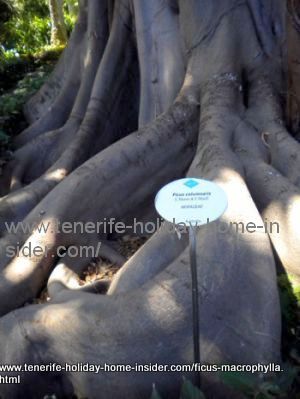 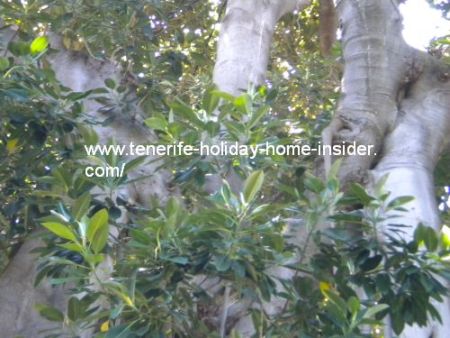 Note: Both the insects and the florescence with male and female flowers on the same tree depend on each other for pollination or reproduction. In fact the wasp is placing its eggs into the flowers which hatch from the later fruit that is much smaller than the commercial fig.

When the gigantic Tenerife Ficus may not need to strangle

The photo below is another example of my thesis that the famous Tenerife Lord Howe fig is at least not a perpetual strangler. It very much looks like many buttress roots seem to grow into each other which creates strength 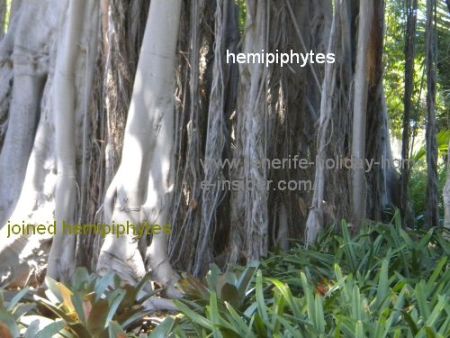 Here and there solid trunks seem to originate from joined hemipiphytes or buttresses.

Generally, hemipiphytic is partial with any Macrophylla fig. It's never parasitic. Fig air roots are like Tilandias that don't suck from the host plant but live of nutrients in air and moisture and by the sun. Indeed, strangling may only happen when there isn't any strongly rooted epyphyte to lean on from the same mother tree. This observation is also contrary to an earlier statement that the fig from Lord Howe is made up of hemiepiphytes without a distinctive main trunk, The Tenerife Macrophylla has such a center. Anyway, it's a question of time. After all this tree is not even 250 years old unlike the Drago Milenario the so called Icod de los Vinos Millenium tree of more Tenerife dragon trees.

How old are fig trees in general? 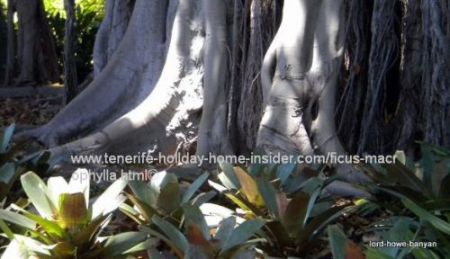 Climate for the Lord Howe Banyan tree The climate in the Tenerife Orotava Valley of Puerto de la Cruz is similar to that of Lord Howe in the Pacific ocean. Both have trade winds with moisture which is vital for the air roots of ficus trees.

The latter also includes rare exotic figs at the park.