Romantic holidays engrave themselves for ever. Such memories live on into old age and even defeat dementia.

Just think of those most precious childhood moments in your life...

Join me on a photo tour through La Laguna one of the oldest Tenerife Spanish settlements,  one of finest world heritage centers.

Forgive us for lighting up some photos, as everything was rather dark but all the more magic. Lets hope that the images still represent a mood which was so perfect for romantic holidays. 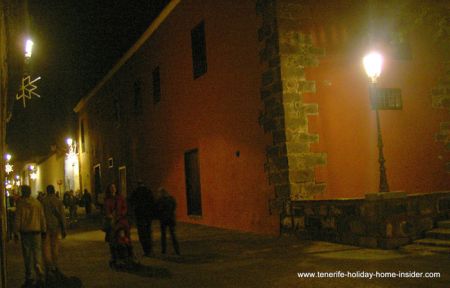 Romantic holidays in the old quarters of La Laguna

Going back in time was our intention to catch the spirit of romance.

A difficult task?
No, this dream is easy to grasp. It's often not more than 4 hours away by cheap flights to the biggest Canary  Island from the UK and the rest of Europe.

To get to our goal in the old quarters we walked along the road Calle Eraclio Sanches where cars brushed past us.
Shops in La Laguna, some of which displayed romantic decoration, were open on this Sunday 28th of December 2008 for fear of economic recession, as extra effort to sell before Spanish Thanksgiving holiday on 5th of January 2009.

The old quarters of La Laguna

Suddenly, at a cross road a new area started. A red color which engulfed a huge building ahead on the right was drawing me in like with a magic wand. It bathed the whole walk way with a  reddish,  warm,  welcoming aura. I had to capture this almost still life on photo.

Little street lighting and Spartan Christmas decorations on the left as well as at the end of the visible pedestrian path invited to explore with the clock turned back until,  at least to century XVI,  if not more.  A few bricked up steps drew the gaze to the right.
The illumination was perfect and couldn't be better. Later, we knew that the amount of light was typical for romantic holidays on Christmas in the historical Casco of La Laguna at night.

A young mother with pram and casually walking men look like furtive actors.  They represented the present. However, their modern clothes didn't disturb the olden days' mood, as illumination didn't depict them much.
No stress, no worries but,  total timeless peace are portrayed by, almost,  surreal photography.

Soon after the big red house we arrived at a massive,  old church in a broad passage on the right. 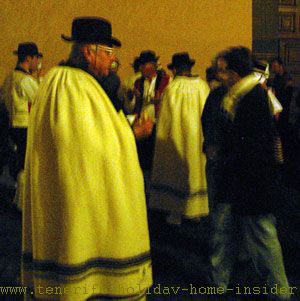 A group of people assembled for a church party outside on the left of the building by one of typical  dark, heavy,  wooden timber doors.
Many of the by-standers wore traditional Tenerife gear used in Tenderete folklore where La Laguna hosts the best.  The Tenderete musicians kept warm under long,  cream colored capes.
Allow me to show them with a photo where light was augmented, as it was,  almost, pitch dark.
Now, the capes look yellow. Those Tamarcos were a custom outfit of the Neolithic Guanche of long ago and are only worn for festivities by the men.
Many of them also had guitars or their tiny versions the Timples. 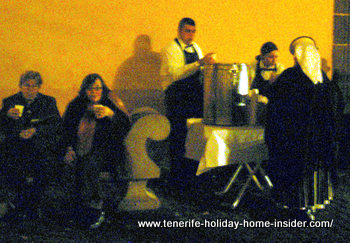 Out of the dark,  an elderly man approached us. He looked more like a shadow.  He invited us to join for a drink and cake.

Just figure how romantic we felt by this gesture. Mind we were total strangers under those dim lights next to cold,  bare,  cathedral walls of an ancient historical building.

A cup was given to us. It was filled to the brim with a steaming hot drink. It came from a container with a tab. The metal of this big server even shone in the previously dark image.

Indeed, faces of the figures by the wall could hardly be seen.  Suddenly,  we were part of a hot chocolate party.

This was a little gesture which contributed to the unbeatable Tenerife climate where a hot, sweet drink was warming our hearts for romantic holidays. 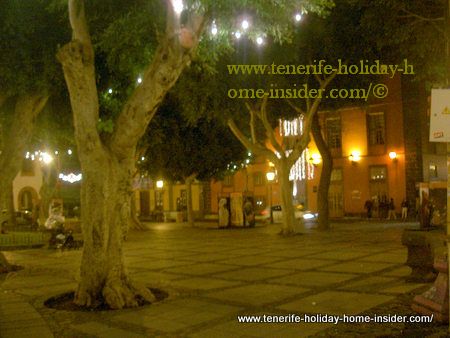 Soon afterwards, we walked a little in circles. Finally, we encountered a beautiful, old town square called Plaza del Adelantado by the town hall. Look at it when the moon is up.

Ancient buildings whose yellow, red and white facades are brilliantly adorned with outside Christmas decorations embrace the square. It's quite unreal how such illuminated backgrounds create depths, illusion and a dreamlike sensation. That's what you want for idyllic holidays.

Leaf heavy branches of the trees were sprinkled with more festive dots of lights.  Often,  they don't appear bigger than glittering peas in these Christmas photos.

What a fantasy world for romantic holidays during Tenerife winter! All inns with their dark timber framed doors and windows around the square draw you in with inviting light but,  without Christmas charisma, in other seasons. The composition of everything in this location has a timeless allure for any holiday,  any time of the year. 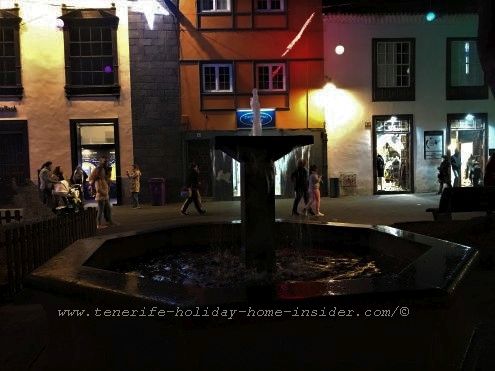 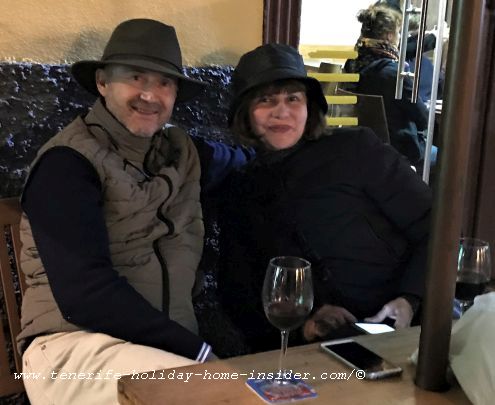 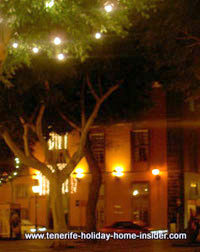 Venture to La Laguna if you have a holiday home in Tenerife and are on the island more often...
Turn any odd day into a romantic one under stars..

You don't have your own place to stay for vacations?

Book a self catering apartment at Hotel Nirvana by Plaza del Adelantado. This means you can make your own meals but of course, this hotel also has regular hotel services where an elegant restaurant may spoil you. A huge public car park is right opposite, by the way.

Savor excellent Cerrano ham in the romantic Bodega Patio Canario at Calle Manuel de Ossuna, La Laguna.   Try find a bottle of one of my favorite local Tenerife wines called  Tajinaste Vino Tinto de Valle de La Orotava.  (price around 8 euros) That way holiday bliss at night will be guarantied.
Come for Easter vacations to La Laguna for its
Good Friday processions. You will be overwhelmed by them. They go back to ancient Spanish traditions with a spooky touch that is famous for Spain. This is romance by turning the clock back.