Spanish traditions of Easter celebrations to make you shudder

Spanish traditions are generally deeply rooted and yet again much respected in all regions of Spain. 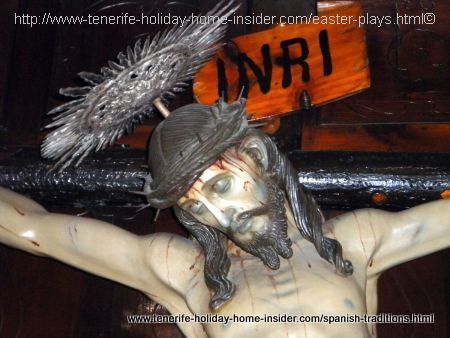 San Cristóbal de La Laguna, photos of which emphasize holidays with romance, delivers an ideal backstage for dramatic spectacles. Such public undertakings are not only meant to show off something. Their cult serves Spanish customs also in the name of Catholic faith. The fact that it is united in the case of La Laguna by guilds and brotherhoods of all sorts of interests, is good for the second largest town of of the biggest Canary Island. 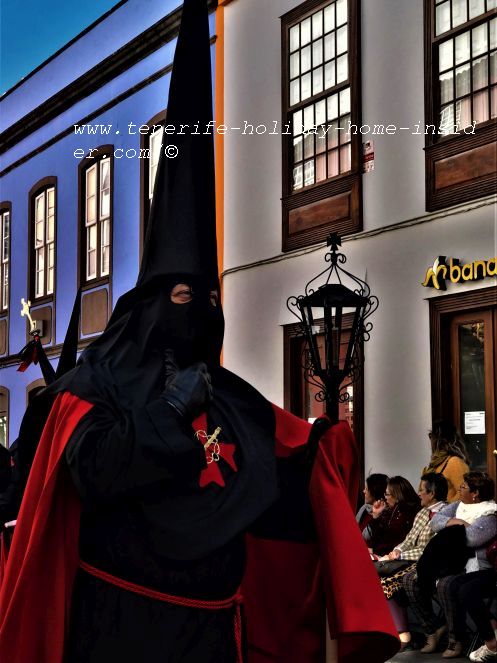 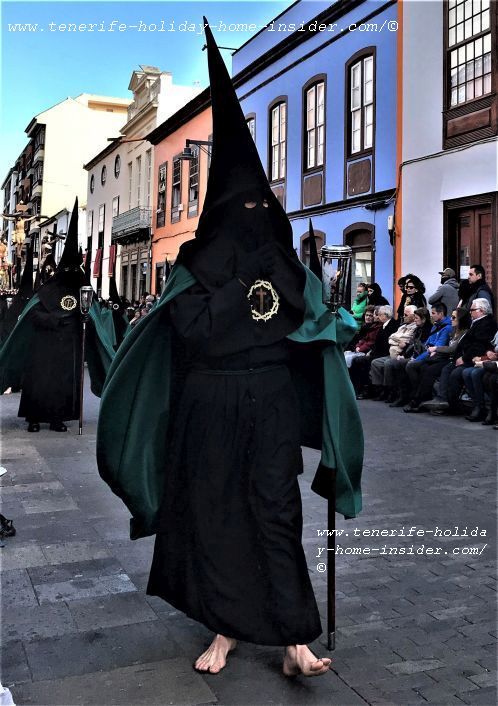 One of those guilds is named Cofradia de Misericordia (brotherhood of compassion) in Spanish. It was once linked to charity work and financial support for the first hospital of La Laguna. This pioneering brotherhood with 30 brothers had helped with the administration of the said Hospital de Los Dolores under the management of Juan de Oñate from 1519 onward. The guild was reinstated and truly revived on July first of 1952, after it had been dormant for a long time after the Middle Ages. 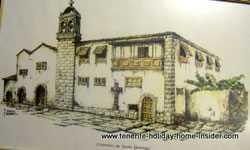 By the way, contrary to some classic Spain brotherhoods such as some clubs for friendships in Tenerife, the guilds of San Cristóbal de La Laguna Tenerife are still closely knit with the Roman Catholic church. This makes the institution of the church of the Vatican one of major players in Spanish traditions of Tenerife.

It is important to note in this context that the convent Convento de Santo Domingo de Guzmán still belongs to the parish of La Laguna. 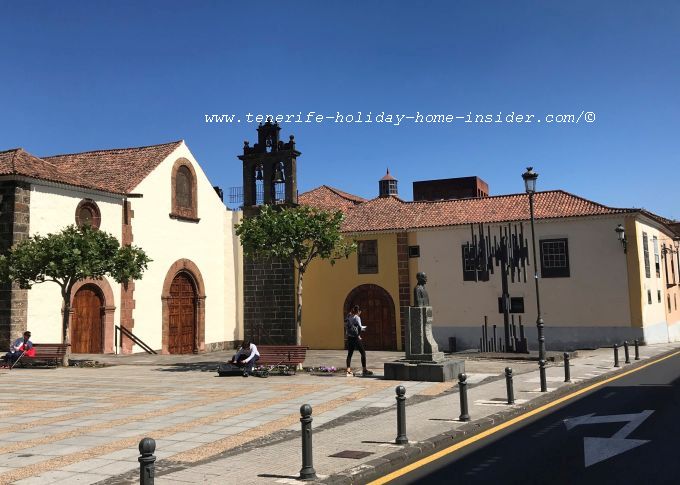 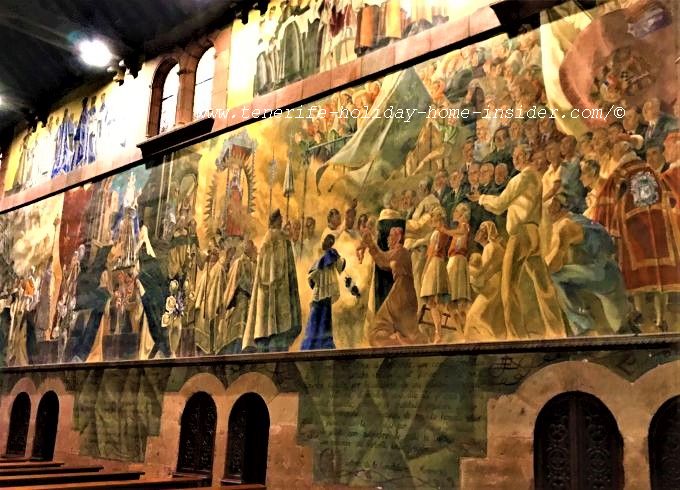 Therefore, it is now custom that the Tenerife main bishop is leading on the Magna procession on Good Friday in La Laguna.

Spanish traditions by a Magna procession

There are several traditional Easter processions which start on Palm Sunday seven days before the Easter Sunday of Resurrection, while La Magna tops them all. It is also most popular with families and tourists. In fact, Easter with Viernes Santo is more important than Christmas in the Catholic faith.

Where encounter a hooded Easter procession?

Not only Tenerife has Easter customs with hooded men. I saw a scary Easter march in Vigo on mainland Spain in 2001. There, the hooded guys looked almost identical to those of Tenerife. Therefor, it may be hard to know who has invented those Spanish traditions of solemn Easter parades. 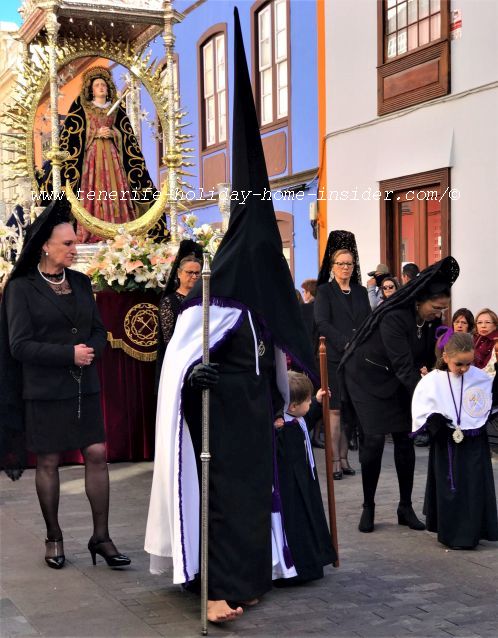 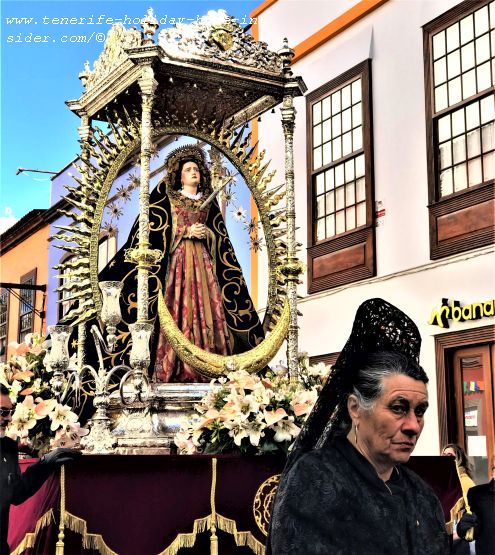 Men with long dark capes trot toward or past you. Pointy tall purple hoods, blue, red, white or just black ones leave no flesh between the torso, nor do they reveal a human face. Sometimes a white robe is worn underneath. Ku Klux slits mock the location of eyes. Bar hands hold sturdy timber sticks which look like being an inch thick. Sometimes, they uniformly point towards the central empty road space between the heavy looking marchers.

All that timber forms almost a menacing military pattern of a Sphalanx.

Monotonous drum beat echoes between ancient houses on paved or cobble streets. It sounds less threatening, when it reaches the town square Plaza del Adelantado de Lugo, who was a founder of the first Cofradias of La Laguna.

The silent Laguna parade in the dark 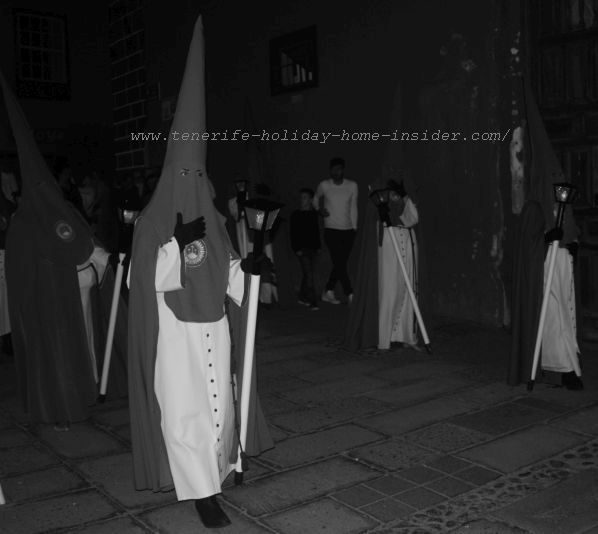 Following Spanish traditions by brotherhood Easter celebrations of more than half a century, a procession which is called the silent one at 10 p.m. repeats everything except for the sounds of music by a few bands. Only the faint noise of chains is heard when they are dragged along on the paved streets in the old quarters of towns.

Traditions with a wooden cross made of real trees 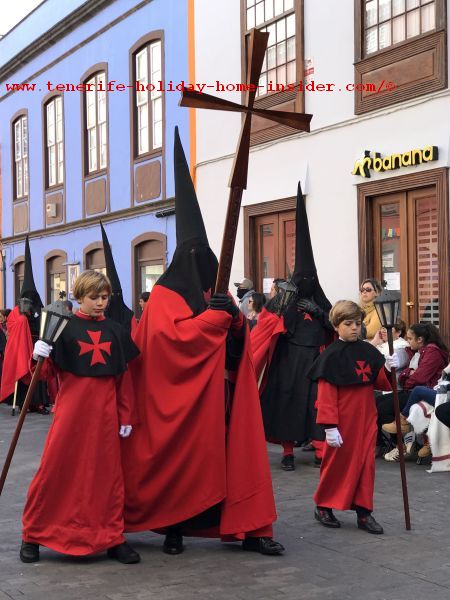 Penitents of La Laguna don't all look spooky. Besides, even children and dignities, such as the bishop and clergy, a military elite group and important politicians take part in the procession. 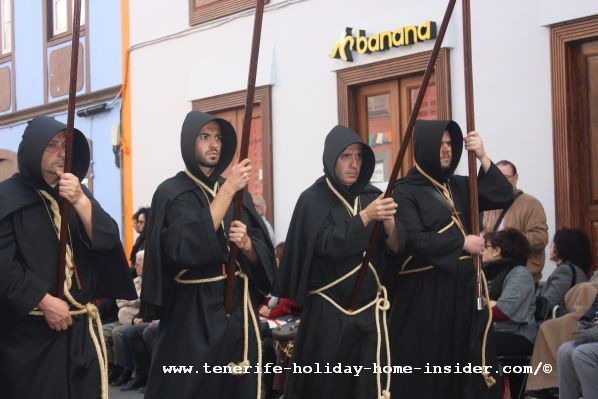 La Laguna penitents with exposed faces during the afternoon procession in the Carretera main road of the town Casco Old Quarters. 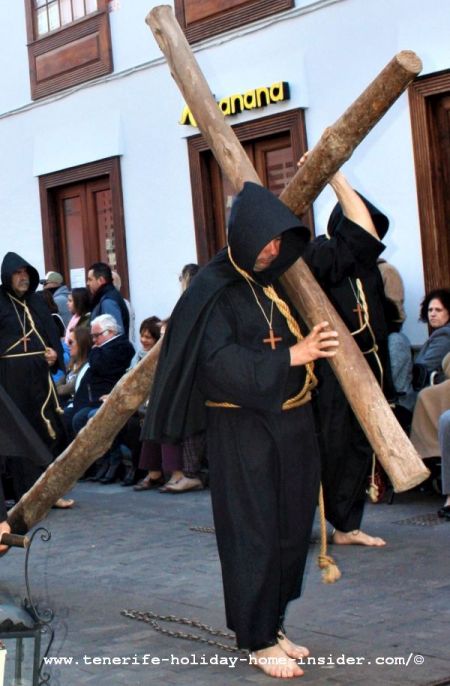 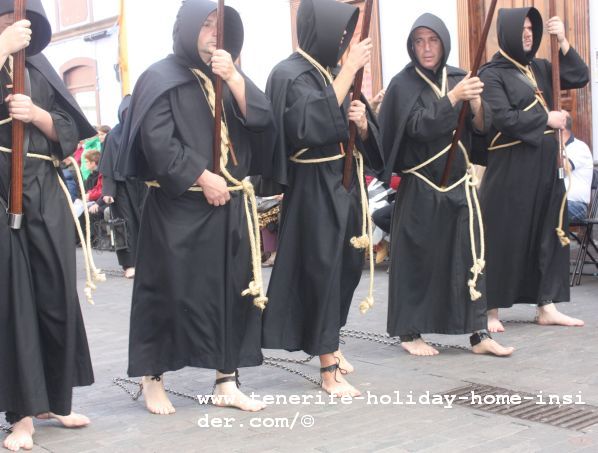 However, any large, wooden crosses, metal chains that complicate the walking of bare feet still play a prominent part as symbols of repentance. Not to forget that temperatures of La Laguna where winter coats are seen during the so called Via Cruxis are generally lower than in the rest of the island. Never forget something warm to wear...

In La Laguna, some perceive it as even more spooky when rustic sticks light up the way during the Silent procession. Then, some pedestrian passages near the cathedral are almost pitch dark. Just like I found them but, with added magic around Christmas in 2009.

Such a climate aggravates feelings of time gone by. Wouldn't you think of scenes of the opera Hunchback of Notre Dame and of French revolution conspiracies by Montmartre of Paris? 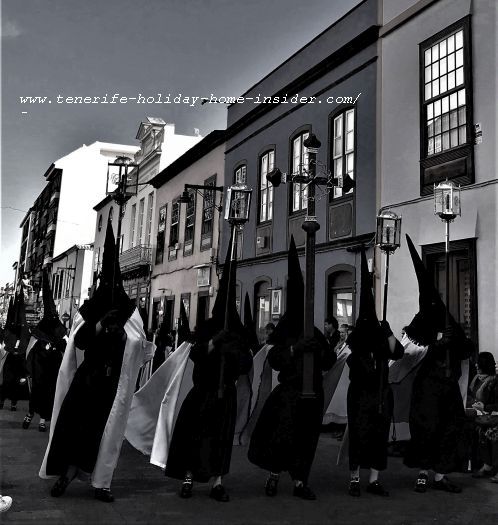 Tenerife Easter a feast with somber, silent processions at night

One of many good sides of La Laguna brotherhoods

Contrary to all this, just figure another aspect of those  traditions. In fact, many of the sinister looking creatures of the same hooded brotherhoods take human ethics by the Catholic faith very seriously. They are much involved in social work for the very poor and needy of La Laguna town.

The glamorous part of the main Good Friday processions

Enjoy seeing those enormous trophies of baroque church artefacts and other churches of La Laguna when they appear at intervals between the Cofrades at a topic of La Laguna Easter where the emphasis is on floats with sculptures as well as Easter treats to eat. 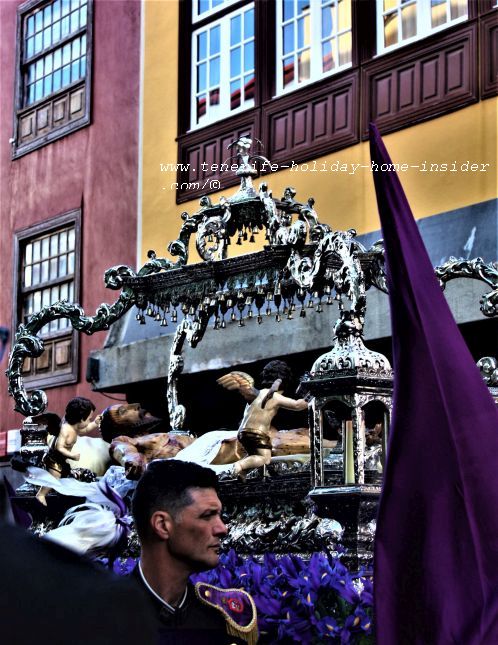 Such sacred treasures are turned into street art every year during the Easter Magna in the Casco the old quarters of La Laguna on the Saturday before the Resurrection. Many originate from Convento Santo Domingo de Gúzman. There, Amaro Pargo a legendary Tenerife Corsair donated them.

The reason for taking church sculptures to the street

Art images or sculptures of street Easter displays are always meant to stir compassion for Christ's suffering with locals as well as with tourists. The Virgin Mary of the Catholic faith is also taken out to the street as part of Spanish traditions during Tenerife July festivals as well as during other church processions.

How get to the old quarters of La Laguna by Titsa

The best and easiest in my mind is to use its very frequent Tranvia transport from the capital Santa Cruz until the terminal Trinidad of La Laguna. There, encounter a board with a street map with all tourist sites marked by numbers. Note that the 104 bus normally also connects Puerto de la Cruz and the capital about every hour after midnight, even on holidays as shown

These Adeje events of Viernes Santa the Holy Easter Friday have become an important tradition. They are so popular that they are now broadcast by the National television by the year. Mind that they are performed by amateurs mainly.

Another less gloomy, but grotesque custom of worshiping street art is the Fiesta of the Sardine. Its mock burial by the ocean takes place after parading the huge artificial sardine through the roads as part of the Carnival tradition of Tenerife. All ends with great fun.

To the contrary of Easter, Christmas on the biggest Canary Island reveals many Spain Tenerife traditions which are bright and cheerful without any gloom.