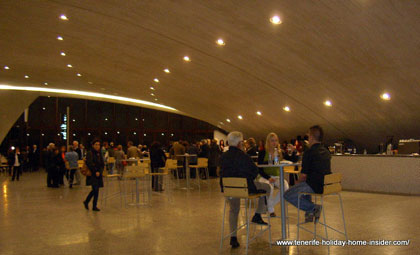 My personal favorite Tenerife nightlife Santa Cruz de Tenerife in its capital is a concert or show at the auditorium Adán Martín. You get delicious little tapas in its lobby and have no problem with parking. Otherwise spot best Tenerife capital accommodation just up the road which find by scrolling down this page.

La Noria party street for top nightlife fun for all. 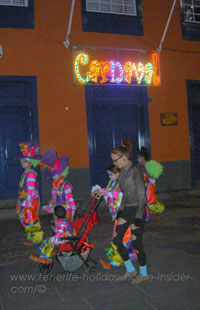 There is much high-life on weekends at a roof garden terrace above Restaurante el Bulan and Bar Restaurant El Lagar of La Noria.

Notice the Noria Santa Cruz Party street carnival decoration above a door. A family of five is dressed the part. Their young mother seems to be in a hurry to take them home, as the carnival nightlife of La Noria with all its glamor of artificial lights is about to start.

Otherwise, La Noria with its countless gigs, shows and festivals is the most popular night thrill spot of Santa Cruz for the young and those who are young at heart.

Santa Cruz of Tenerife a fairly safe city with the luxury to walk it at night.

Best lower key Tenerife nightlife starts by the port waterfront Santa Cruz when the moon is up.

My favorite site for starting night walks in the capital begins after Plaza de España. There or nearby, events like night markets, Plenilunio and much more happen, often. 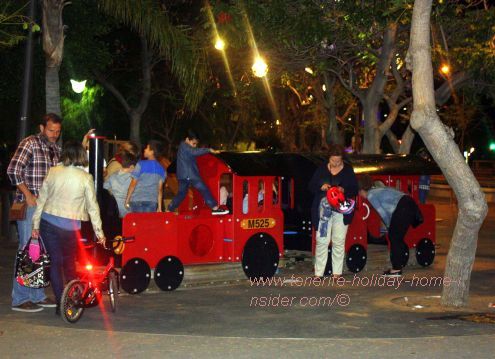 Cross the nearby downtown shopping district, such has C/ de Castillo and head towards its Rambla via the picturesque Plaza de Los Patos... It often becomes a discovery tour under moonlight and artificial lights.

Nightlife news Santa Cruz concern the new shopping hours in the capital which have been including week-ends since spring 2013. This is a new craze with its own kind of night thrills. 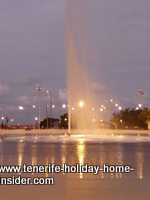 Plaza Espana illuminated at night by its lake in Santa Cruz Tenerife.

Plaza Espana illuminated in the dark is quite a sight indeed. Imagine winter ice skating by moonshine, as introduced there in 2010. It turns the lake of the Santa Cruz capital's main square into an even more spectacular attraction. Stop of its top the range bar for a refreshment.

Night life prospects that are on the way.

By the way, a bridge that links Plaza de España to a new ocean front with yacht harbor is already in place, as you can see here. Bars for clubbing will certainly follow suite. There should be room to create top Tenerife nightlife Santa Cruz by this spot.

Ferries, yachts and other ships throw their dancing lights into the dark ocean waters by the ocean promenade.

A luxury cruiser is always near the quay.

There are dance clubs near the shore in 'Avenida de Anaga'. Salsa music and nowadays also Techno seem to be the order of the day, in this region.

Young folks who are dressed in trendy outfits come and go. They used to show up after midnight after outings to movies. Cinema isn't as prominent a night past-time any more. The young are already seen earlier now.

Others mingle with the crowds in the Maritim Park. (Parque Maritímo) It has a popular Pub and the disco called 'Dreams' at Avda. la Constitución, 5. 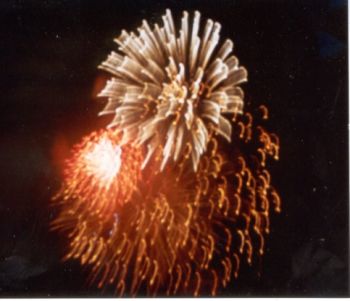 Tenerife fireworks and festivals in its capital.

Check it out if you happen to pass by. It's beside the Santa Cruz Auditorium called Auditorio Adan Martin. The latter is high on the agenda for live cultural performances at night.

Tenerife fireworks often follow some of its performances. This opera house also attracts huge crowds during a free New Year's  night celebration outside.

Often, concerts are given by the Santa Cruz de Tenerife Symphony Orchestra after hours and with some exceptions during the day.

You find them all over Tenerife in all tourist hubs and sometimes near beaches. Some even play classical tunes. By the way, the Tenerife Symphony Orchestra sometimes also turns itself free street band at night and performs on town squares, such as Plaza de Madera in the capital. Of course, folk music plays a big role in Tenerife nightlife.

More but, filtered lights greet you when you stroll on this park-like promenade. It's the best and oldest tree lined avenue on the island. You will find park benches to sit down as well as many different bistros and Cafés. Needless to say is that all nightlife there is very low key, but romantic in general. This famous Rambla also has a great spot for eating out at night at Taberna Ramon.

How sleep over for Tenerife nightlife Santa Cruz?

Do yourself the favor and don't drive after a night out in Santa Cruz when you were drinking liquor. Select from any of the recommended Tenerife capital hotels, most of which are in walking distance of night action spots.


The May festivals have some Santa Cruz night thrills, such as during the festival of the 'Magos'.

Also not to forget are many Tenerife Carnival events when street dancing proceeds around the clock.

Tenerife nightlife in other towns.

Obviously, Los Realejos the Tenerife party town with its 80 fiesta celebrations has many nocturnal happenings during those times. Modern music as well as folk concerts play a big role. So are films, drama, dance and other events. 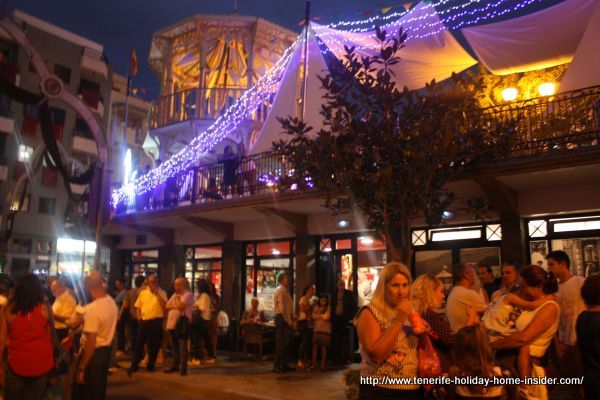 Nightlife Los Realejos such as on the night of the election of Miss World on Plaza San Agustin in July. 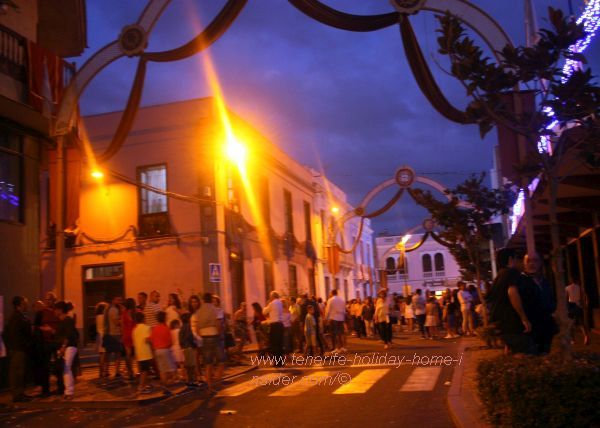 Puerto de la Cruz the oldest Tenerife resort has much going again after dark on Plaza del Charco as well as by the Muelle and on Plaza de Europa. It also has some discos for older folks on Avda. Colon. Its best disco for the young and those in their thirties is el Azucar Club near the Casino and Mc Donalds of Plaza Reyes Cathólicos close to the Lago Martianez. 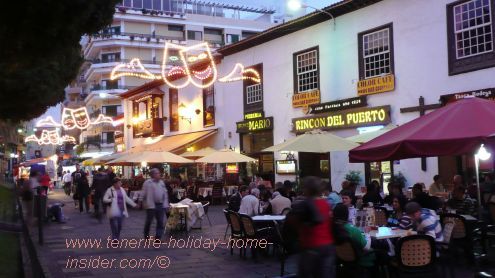 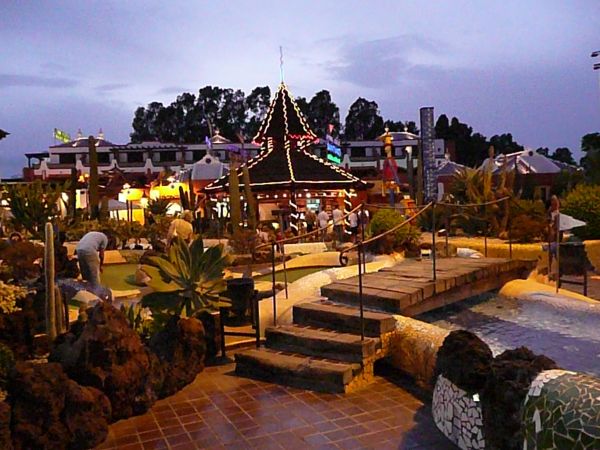 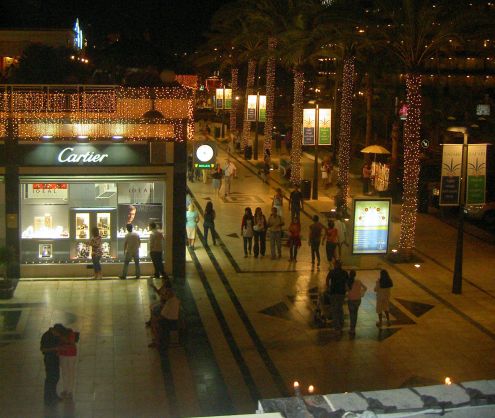 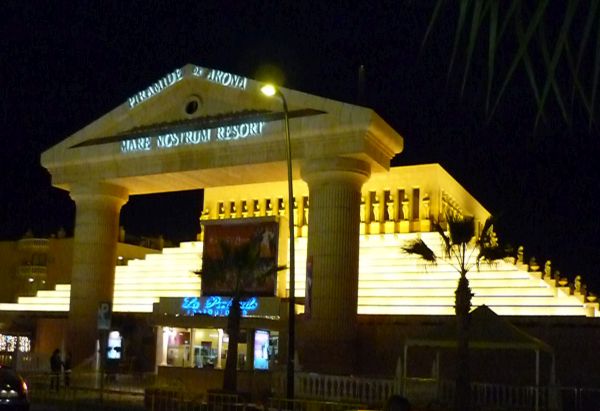 In fact, excess clubbing and constant shows are only found by Playa de Las Americas such as Arona.

Go back from Tenerife nightlife to Santa Cruz Tenerife...

Back up to Top?