Santa Cruz Tenerife hotels accommodation is easily reached by the island's north airport, by tram, cab, bus or by any car. 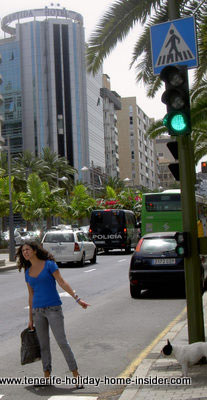 **** SILKEN ATLANTIDA HOTEL is a new, big, fancy tower hotel "with views to die for".

It is ideally located only 5-8 minutes walk from the Auditorio Tenerife,.

Venture a few steps down the road depicted on the photo nearby....

There, find the new Corte Ingles, as well as Carrefour and the Centro de ferias (trade fair exposition center) as well as the main island bus station...

Enjoy the hotel's stylish, bigger than normal rooms with free Wifi. Have the options of extra large beds and smokers apartments, a jacuzzi with spa to get pampered for wellness, a hotel gymnasium, large conference facilities.

Grab your chance to be at the magic ocean park called Parque Maritim Cesar Manrique near the Santa Cruz Silken Atlantida Hotel. In fact, get there by a 4 minutes walk. ... 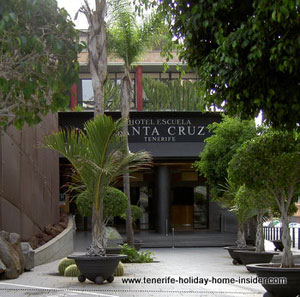 ****ESCUELA HOTELTenerife is a 72 apartments big hotel which teaches hotel management. Therefore, it sets an example to its students and thrives for hotel excellence. The Escuela Hotel is about 10 years old but, well maintained.
This hotel opposite the soccer stadium on Sebastián street by the cultural center Park Viera y Clavijo is also only 10 minutes from the Auditorium and Trade Fair Center. It is a good base to venture out for shopping, sightseeing and for Tenerife's main carnival. Enjoy its pool, semi shaded indoor court, fitness equipment and much praised cuisine... Its specials are Wifi Internet and good but not too big conference and entertaining facilities. This hotel is often rated almost 5 star, as it is one of best Tenerife deals for accommodation...

**** The NH HOTEL in Tenerife's capital is a designer hotel of the popular hotel chain NH.

This 1Nh Tenerife Hotel is situated in a quiet street around the corner from the town square Plaza de España as well as Plaza de Candelaria.

Reach all the Tenerife capital's main commerce with downtown designer shops like Zara, other attractions and harbor easily from it! 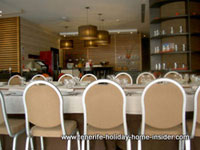 This hotel near the sea shore is a true Tenerife boutique hotel as depicted beside.

Discover Tenerife nightlife in the capital on close by Avenida de Anaga and Rambla... Get inspired by generous modern design and amenities, such as making your own hot drinks at the NH boutique hotel Tenerife...

Mind that free Wifi claimed by European and Spain hotels is very rarely really free. More about it at Wifi Internet hotspots which are normal with the Tenerife Nh hotel

*** HOTEL COLON RAMBLA of Tenerife's main city. This hotel has self contained apartments and a pool surrounded by subtropical trees, bushes and flowers. Enjoy this quiet oasis for romantic holidays. Please, note, it is not ideal as family hotel for little children. Have romantic strolls right by its doorsteps during day and night. Go to nearby Park Garcia Sanabria, to the precious little Plaza de los Patos. Walk under trees on Tenerife capital's longest, beautiful avenue called Rambla with its well preserved stately old houses. This Rambla invites for semi shaded rest under magnificent trees and romance at night...

Contemplate this most beautiful avenue where a genuine Henry Moore sculpture of a warrior is on free permanent exhibition with more scattered about art work below Rambla trees. 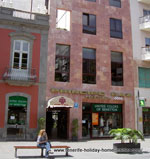 It is your best bet for well cared for accommodation in Tenerife when you want to shop till you drop.

Click to find Tenerife capital parking information thanks to Zara fashion. Other designer shops by Lacoste and many more very interesting stores and charming boutiques are all around the Principe Paz Hotel in the capital of Tenerife, a few steps for Hotel Cercatel Principe Paz. 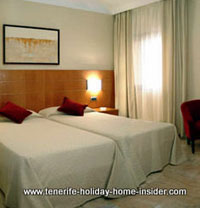 Twin or double beds of the Principe Paz Hotel bedroom are an option. Hotel Cuisine is possible to book on sight but, the good Restaurant El Aguila is opposite and many more are nearby. Its 80 double rooms were renovated in 2004. The Principe Paz is a no Smoker hotel and has no balconies, but the precious little Park del Principe is facing this downtown tourist haven. Find more information about nearby Plaza de España here...

It remains to mention some Santa Cruz accommodation of olden day hotels like the Mencey of the Tenerife capital which lost grace by reviews from 5 stars to 4 stars, but looks like bouncing back now after extensive revamping.

From accommodation Santa Cruz back to other hotels Tenerife

Go to the capital of the biggest of all Canary Islands... to learn more about it.