How enjoy the Tenerife Rambla most?

The Tenerife Rambla now called Rambla (de) Santa Cruz has become #1 on my list for outings. 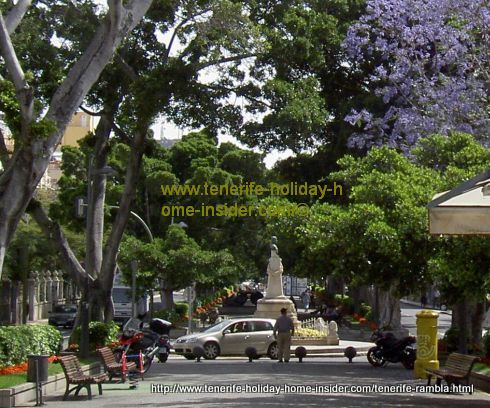 What are the attractions? 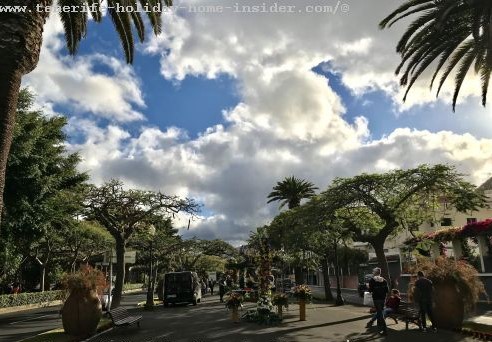 May celebrations with cross decorations on the Tenerife Rambla on May 02, 2019 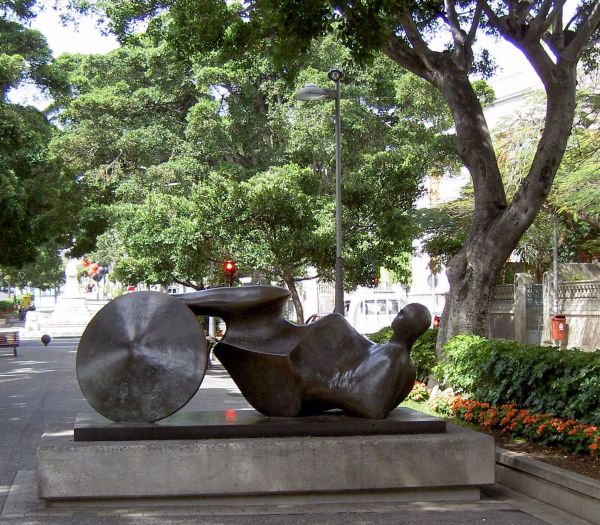 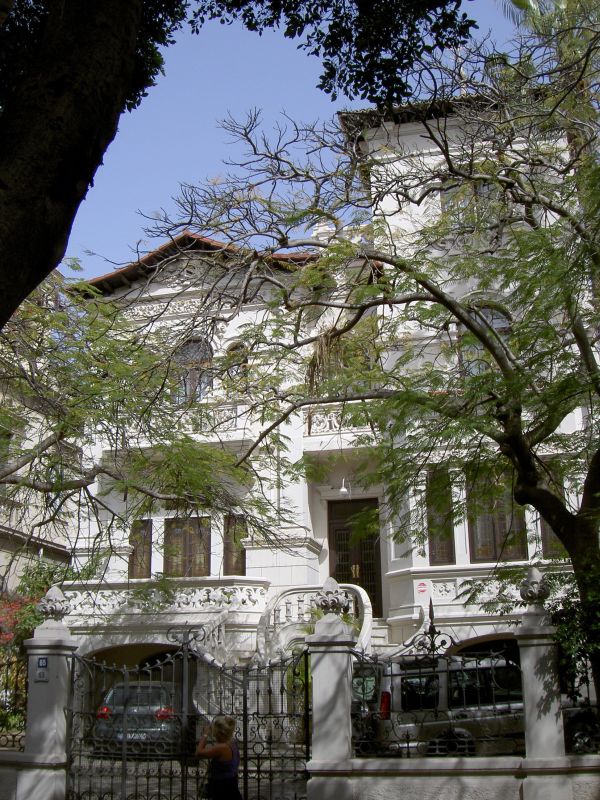 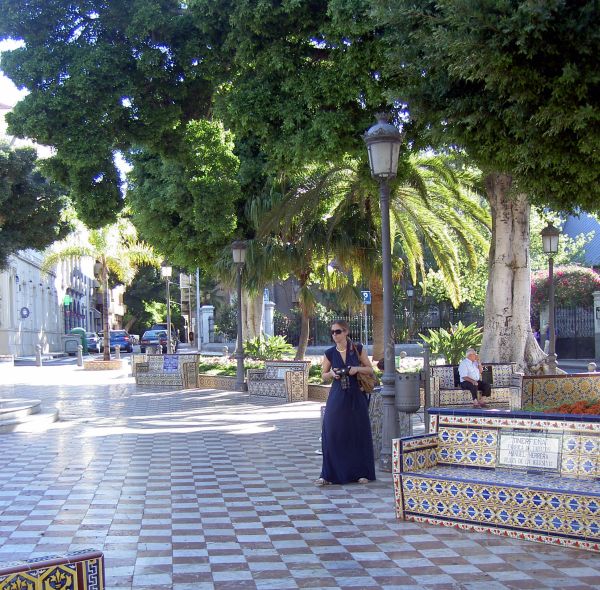 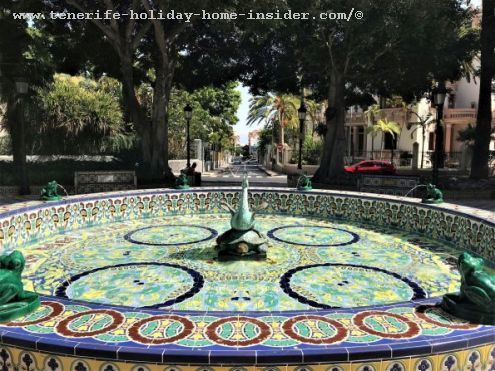 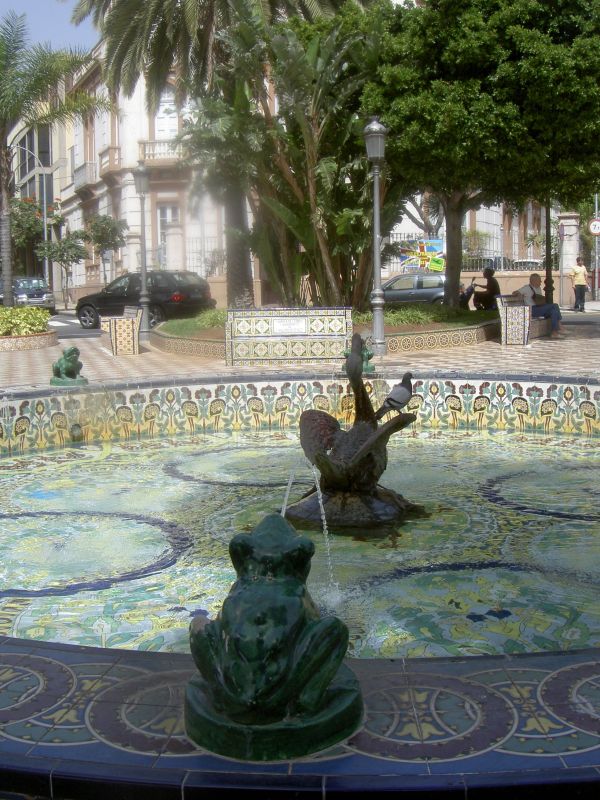 Superb Mozaic crafts
This picturesque town square of the ducks (Plaza de Los Patos) was totally revamped in 2017 and 2018. It's also called Plaza de 25 de Julio in memory of the defeat of Horatio Nelson in 1797. All benches were donated by sponsors whose names are engraved on them. They were wealthy business owners of the Tenerife capital in the first two decades of XX. 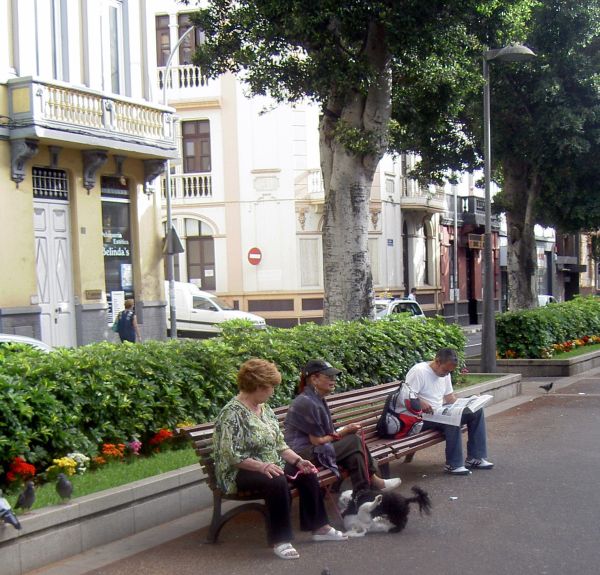 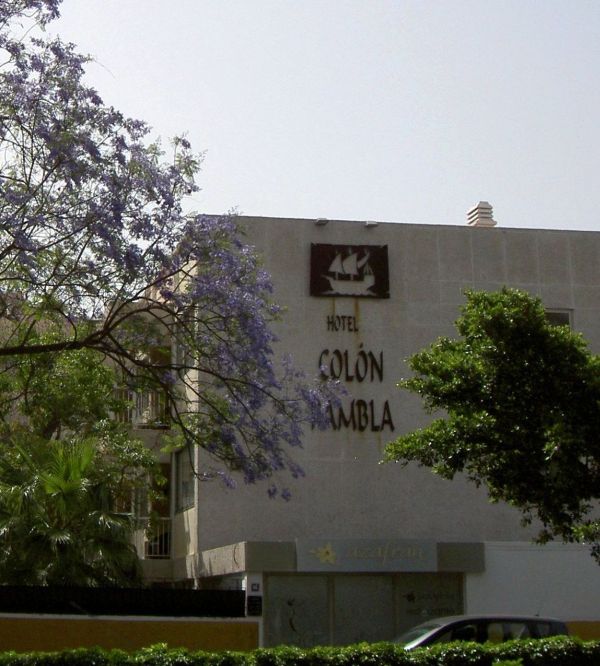 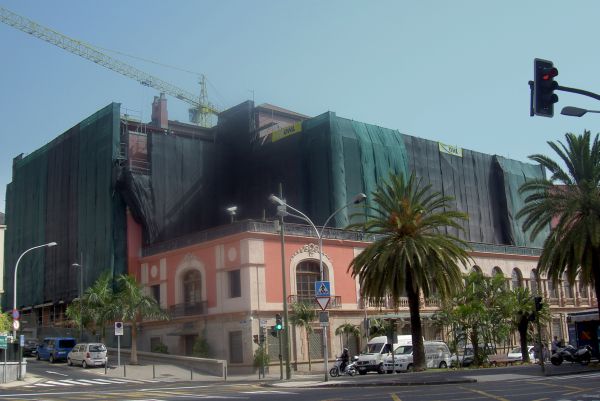 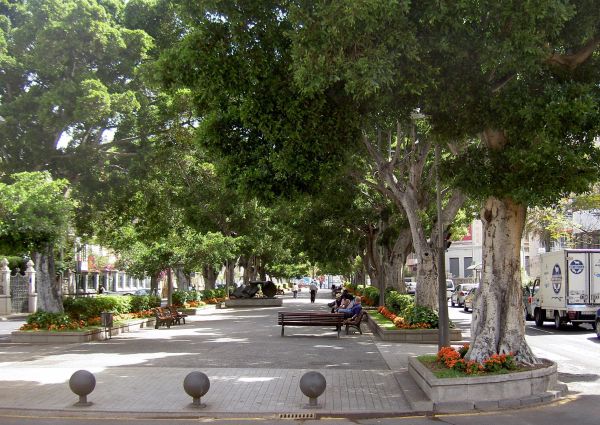 Laurels of India on the Tenerife Rambla 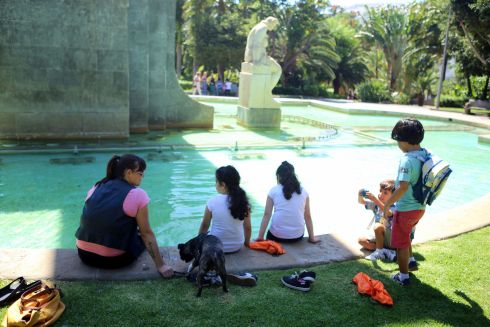 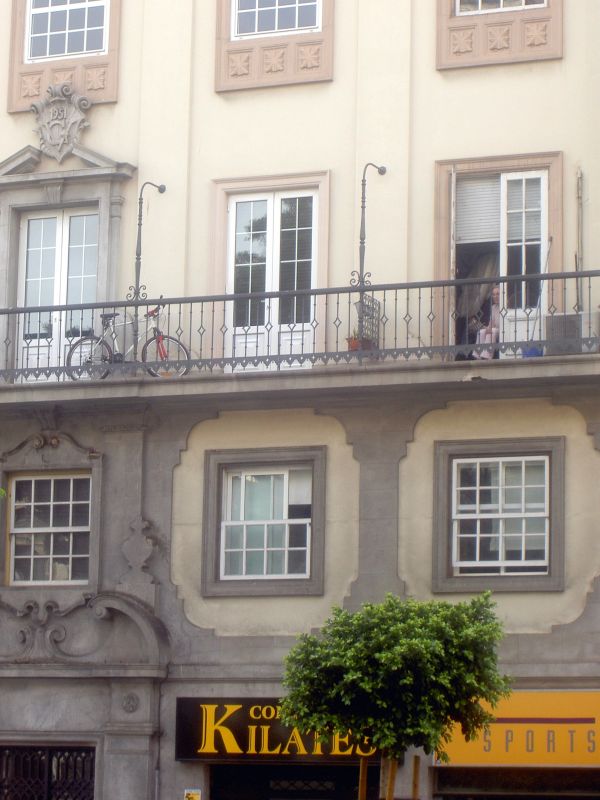 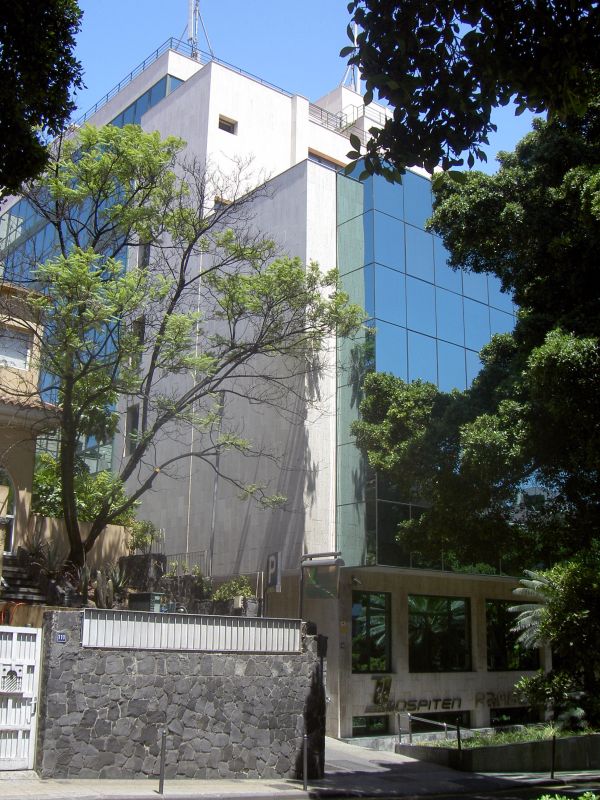 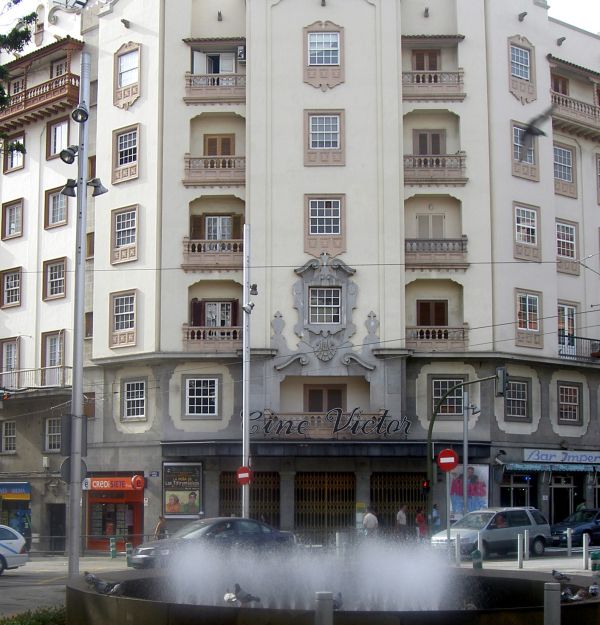 No, none of all that takes my breath away right now. Why? 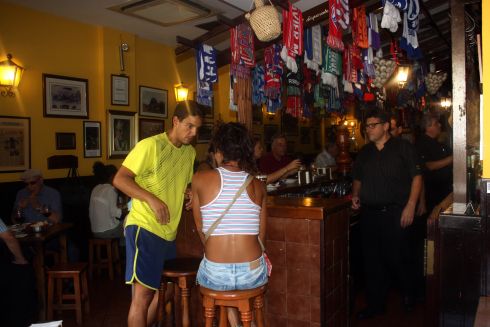 This tavern is the main reason for my latest Rambla fancy.

In August 2016, I searched for the most central Santa Cruz Rambla. 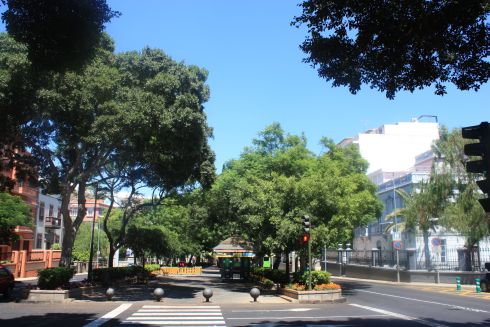 Rambla Santa Cruz the most important.

The avenue's three partitions are most convenient when you forgot your GPS or Internet smart phone at home. A central park promenade separates the traffic on both its sides in different directions. Also, green rail track lawns lead all the way to the TF5 freeway and the North airport via Plaza La Paz from there.

So what about the tavern?

I spotted Taberna Ramon on the Rambla's map.

Yet, my memory only clicked when I walked through its door. I tasted best Cerrano ham and excellent wine there,  way back in 2002. 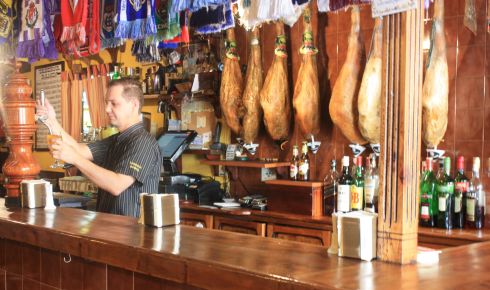 This pub for gourmet eating at reasonable prices is opposite the former bullfight arena at number 56, Rambla de Santa Cruz. 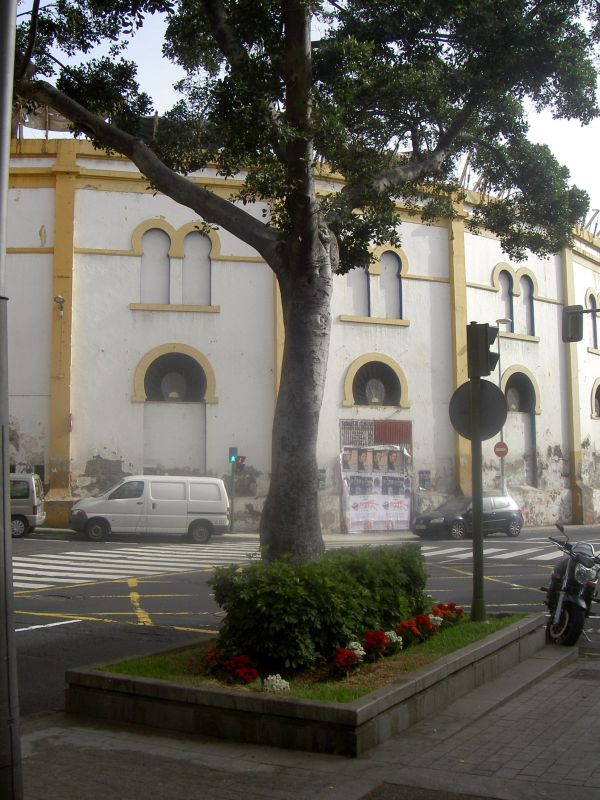 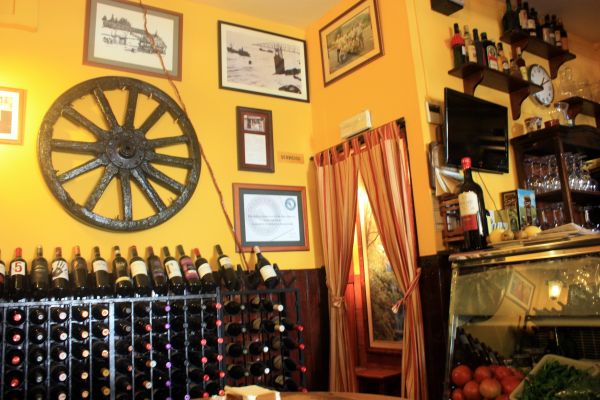 The eatery with bygone tavern flair is now 23 years old. However, the Rambla's humble roots of the XVII century don't play a part. 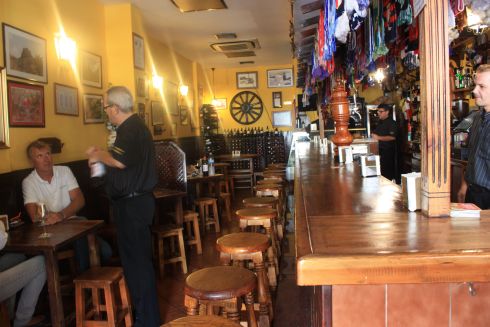 Early at Tavern Ramon for lunch.

A perfect time,  by the way,  to notice how space is saved in taverns.  Stools and small tables are good furniture for it. So is a long bar.

As many as five most attentive waiters were buzzing about to serve more than 40 guests, soon after 1.30 during our visit. Then, newcomers started to cue up. It wasn't even the month's end.  You wonder what it will be like at Taberna Ramon after most people's pay day.

My friend and I had the best fresh Cod fish ever. 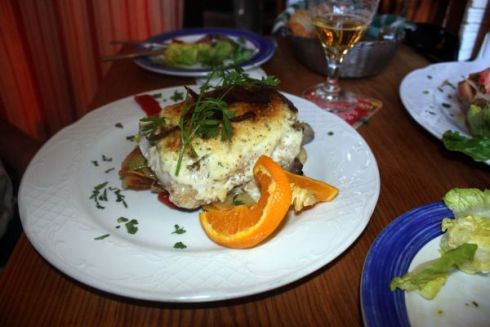 This seafood made my mouth water already by looking at it. What a treat...   The roasted sweet potatoes were wrapped in glazed vegetables, if I remember well. They were a gourmet's delight, too. 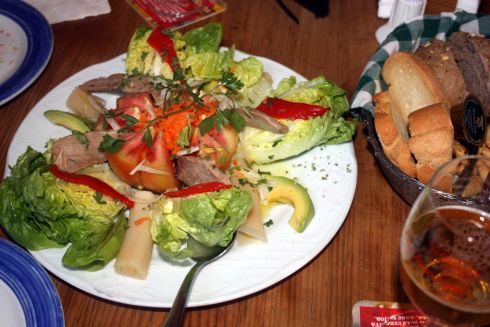 Salad of the house with fresh Tuna.

The salad of the house was a miracle of crispness with real fresh Tuna. No tin food, indeed. The salad seasoning was subtle and exquisite.

This Rambla eatery with its certificate of excellence is #2 in Trip Advisor for all of Santa Cruz de Tenerife.

When best go there?

Go early in the week, such as at 12 noon. Why?  I entered with a friend on October 01 in 2019 by 4 p.m. The place was full to the brim. We were asked to wait for a place to sit. However, my friend declined politely, as he found Taberna Ramon too noisy at that time of the day.

In fact, a promenade, such as the Santa Cruz Rambla, is most enjoyable after a delicious meal.

Where best enter the Tenerife Rambla by car?

Start at Plaza de España and look out for the former Fort Almeida to turn left by a statue which looks like an angel. 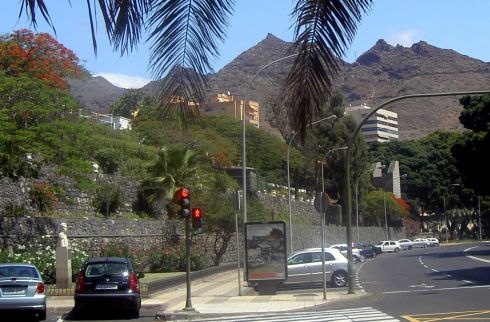 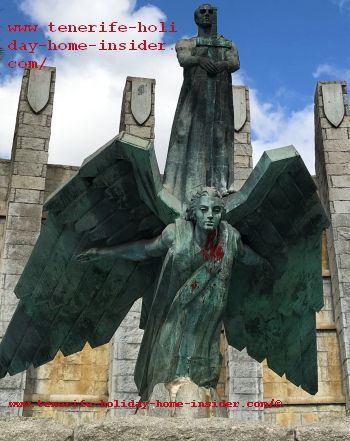 You can't miss the fort's gigantic stone wall. It's also by one of Spain's most controversial monuments on the bottom of the  Rambla by Avda. Francisco La Roche. The memorial reminds General Franco and is smudged with blood. It's part of the military museum of the Canary Islands and almost faces the solitary Chinese restaurant by the sea.
This Tenerife Rambla has changed names more than any other road on the biggest Canary Island. By the way,  it's totally unlike  the famous Castro trail  a coastal Rambla of Los Realejos.

From Tenerife Rambla back to Santa Cruz Tenerife.

More about the main Rambla de Santa Cruz including its history.