The Portillo is the gateway to the 18900ha of the Cañadas del Teide with their 17 km diameter. The gateway area alone is said to have 4 hectares and is located at 2100 m above the sea.

Much typical Teide vegetation grows at that altitude, all of which is drought resistant such as the striking red Tajinaste. But there is much more.  Some plants came from the Hotel Parador's endemic garden when that was closed, sometime before Christmas 2011.

Of course, this isn't forest country with Pines, Cedars, Laurisilva and the like. No palms are there either.

However don't expect too much of a show, as all is still in the making. 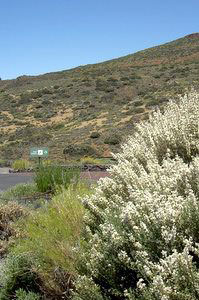 Needless to say, Spring is most spectacular when the white Teide Broom shrubs greet you already by the roadside. Then there is also the yellow Flixweed everywhere.

Tajinastes are spread over a remarkable area near the pedestrian path that leads to buildings.

They house the reception rooms, film centre and small museum.

How reach the centre of the Portillo ? 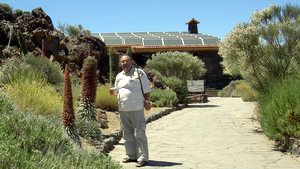 Compare man size with flower size and note the solar panels for electricity generation on top of the roof.

Get there from from La Orotava in direction of Granadilla on Mountain Road TF 21.

The 2nd option is from La Laguna and the 3rd is from La Granadilla in the South. More possibilities are given by Teide walking and driving suggestions.

They include a route via the Mercedes Forest and mention how to get to the Visitors' Centre with a public Titsa bus. 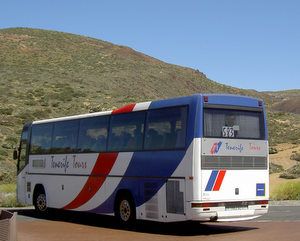 Please mind in this context that the centre of the Portillo which is a halfway house to Teide. But, it's not the same as the Cañada Blanca at el Parador del Teide.

Why more than stop at the Portillo visitors centre?

The centre demonstrates in a most pleasant way by its free film show how Mount Teide Tenerife with its 3717,98 meters came about. It's all done in the context of the Cañadas which form the only subtropical park Europe's. The film accentuates the importance of the World heritage Teide National Park and the whole Canary Island archipelago. You will enjoy a good half an hour of information about the geography,ecology and volcanology of Mount Teide. Your learn how this highest peak of Spain played a role in the evolution of Tenerife. Its relation to the rest of the Macaronesian archipelago and the Midatlantic Drift isn't forgotten.

Four awards were granted to the Portillo Visitors Centre. The most important were of tourist and institutional merit as well as for public relations.

Ask for road and walking maps (senderos) at the Portillo de la Villa which is another name for the tourist centre.

By the way the zona de reserva is marked red contrary to the light green zona de uso moderado (zone of moderate use) which applies to the other sendero trails except Arenas Negras which is yellow. All this has been established in a big route map by the Tenerife Parks Board in 2011.

A bit more photo material is displayed in the corridors of Portillo Visitors Centre.

The Spanish people at Visitors Centre reception may never forget me because I complained about a strange about 2 meter walk way kind of indoors bridge made of thick glass with supporting beams underneath shining through. It gave me the sensation of walking over an abyss with nothing under my feet.

I never knew I had such a phobia...

Earphones make it possible to follow the story on screen at Tenerife el Portillo cinema in different synchronized language versions.

Everything shown in the film is based on most probable scientific facts.

The 'Spirit of the Mountain' of the movie of Tenerife Visitor Centre is kind of a science fiction character.

He keeps you in his ban telling about Teide birth and strange volcanic activities, only 180 000 years ago, of a once estimated 6000 meters high mountainous edifice which transformed Tenerife Island, totally, and left us the much lower Teide.

Seeing El Portillo is part of Tenerife trips we did rounding it off with a generous late trout (trucha) lunch at Restaurant Restaurante Aguamansa when descending the same road before reaching La Orotava turn off. We each had 2 huge baked very fresh trouts with French fries, salad, beer with and without alcohol which cost less than Euros 10 per person in early summer 2008.(prices always subject to change)

We also saw the only Tenerife trout Tenerife fish farm Piscifactoria Aguamansa (Fish Factory Aguamansa) which is on the right just after turning the next bend on our Canadas ascent at an altitude of 1100 meters at km stone #15. Encounter the farm a few minutes from the trout restaurant Restaurante Aguamansa by la Orotava which is more than a Guachinche country-inn with Canary Island cuisine.

Before coming up to Portillo we also visited the large pick-nick spot (zona recreativa) Agua Mansa dedicated to Mr.Ramon Caminero by km 29 mark on the same road F21 mountain road.

From from El Portillo Visitors Centre to more Tenerife Attractions.