Teide excursions to a different world 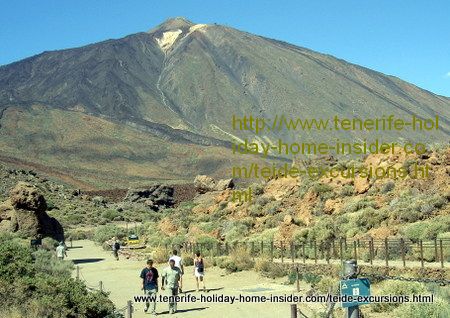 Teide excursions are unforgettable. At least, one trip to the mighty mountain is a must.

Getting to the Pico del Teide

The time table below for the Teide buses only changed slightly for Tenerife South. Also mind that everybody is strongly advised now to purchase a bus ticket a day in advance, as there may be a huge crowd already when you arrive at the bus stop, while many may have bought tickets the day before. Tomaticket supplies the Teide bus fares online

Click proximos eventos  select Puerto de la Cruz or Adeje/Los Cristianos...
The price should be round about Euro 11.50

Friends warned me that time may not be enough time when you arrive by bus from Puerto de la Cruz while on one of Teide excursions.

The Titsa bus takes more than an hour with its stops. There may be long queues at the Teide Teleférico the cable car station that takes people to Spain's highest peak. The same may happen when you return from it and want to get back to the bus quickly.

Therefore, it's safer to spend one night at the Refugio Altavista , more about which find further down this page.

Feel free to search for different Titsa itineraries to get to Mount Teide here.

Read the Teide Cable car conditions and book your trips online to avoid waiting time queues that may exceed two hours at www.volcanoteide.com/es/actividades/teleferico_del_teide

Do you want to download the Teide summit permit? 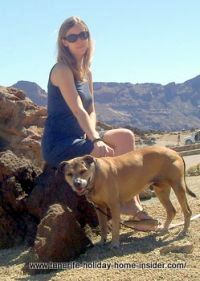 Want to rent a car ?

The photo beside show an excursion to Montana Blanca on the way to Mount Teide. Of course, we rented a car. A coach or a public bus wouldn't have allowed our big pet. Only small ones are admitted.  We had a very happy dog. Jesse got to see the highlands and she could sniff out a different world.

The coastal road to Playa Las Americas and then to Vilaflor may be taken, while the Chio road is an alternative. 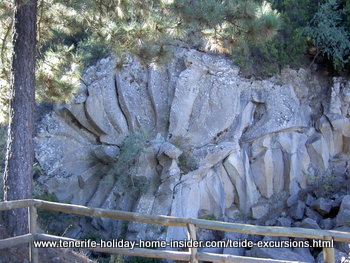 From Puerto de la Cruz via La Orotava on the C.821 and then by the TF21 past the Portillo Visitors Center into the Cañadas which takes 33km.

The so called Mercedes route is the most scenic but, longer way. You will encounter many lookouts, one of which is by the famous geological miracle the  'Stone Rose'.

The Mercedes forest journey begins after La Laguna. There, a driver would take the C 824 or TF24 by which it takes 43 km from La Laguna until the Portillo Vistors Center.  Your car will climb slowly towards Teide on that trip. 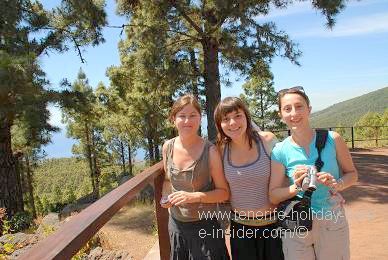 The lovely French girls in my photo had crossed the Mercedes Forest on their Teide excursion. The photo was taken near the Stone Rose.

Best time to start for the Mercedes mountain journey?

It is recommendable to start such a car Teide trip by sun up. That will leave you time to descend later as far as  Costa Adeje  and Las Americas. There will be no chance for a longer hike with the Mercedes trip, except for a little short walking by the Parador and a few other sights. It's recommended to do different Teide excursions.  Of course, you shall need a map, a compass, a GPS and bottled water for any long walks and hikes anywhere in the Cañadas. 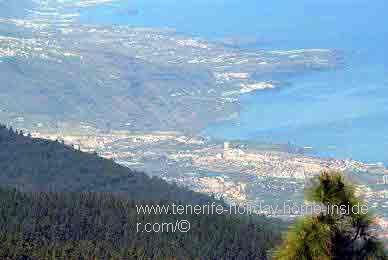 During one of my Teide trips I took a shot of this breath taking view, Your eyes wander over densely growing endemic pines towards a built up coast. The blue ocean is beyond.

It's pleasantly cool and birds twitter in unpolluted air. Many more magnificent view points line the road to Mount Teide, where parking is never a problem.
Pick nick spots are also indicated by the way side.

The visitors center at the Parador Hotel doesn't exist any more, to the best of my knowledge. Its little exhibition center for indigenous plants has been moved  to a bigger Teide reception and information place at the entrance of the Cañadas at the junction of the mountain roads TF 21 and TF 24.

The Teide observatory of Izaña borders the TF24.  There, Star gazing has no limits at an altitude of 2390m above sea level. Open doors for visitors are once a year in June, to the best of my knowledge. Wondering about its latest and best telescopes?

All other seven Canary Island may be seen from the summit of the Teide. You are unlikely to discover number eight the island Isla Graciosa, as it's very small.

Generally,  visibility is very good. This allows to make out the different Tenerife geographic zones by different levels quite well. The scientist Alexander von Humboldt who measured Mount Teide from the sea bed up marveled about this fact already. 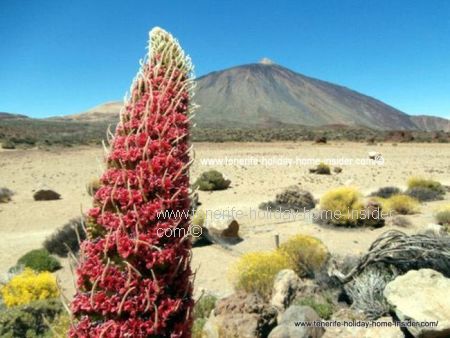 Teide excursions to the summit via the amazing  Canadas del Teide are most spectacular in spring. A good route which lasts almost 5 hours starts by the Portillo Visitors center.  This time of the year has also ideal temperatures for hikes and walks. Encounter the spectacular red Tajinastes which together with Yellow Retama strike an architectural chords in the unique landscapes. Both flower in June.

By the way, even winter has its charm in this part of the world. 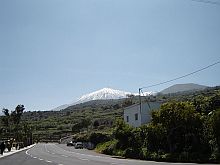 A Mount Teide with snow cap which is quite common from November to April requires winter tires to drive there plus warm clothes. Mind that some roads, areas or the cable cars may be closed.
Snow pistes for Teide winter sports are in the pipe line, by the way. We shall keep you posted. 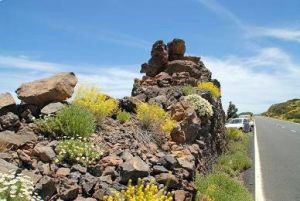 Even the waysides of the Cordillera road to Mount Teide has its surprises in Spring. Natural rockeries with wild white or yellow daisies may be a real delight.  However, not all indigenous flowers shoot out new blooms at the same time. Best time to capture Teide Spring is from April to June. 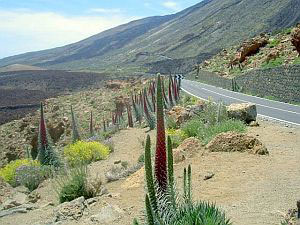 The Teide  Tajinaste Rojo which may reach 3m in height (Echium Wildpretii) thrives in volcanic soil at an altitude of about 1400m (42000 feet) and flowers in Spring.

There is also a blue Tajinaste.

Big exotic animals don't feature with  Tenerife wildlife,  unless you direct your eyes towards the sea.

Look out for birds in peril, such as in Masca, which is not far off by air or bird distance from Teide.

Creatures in the Cañadas del Tenerife 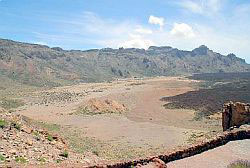 This photo shows you why they say that Hollywood did shots for Wild West Movies in the Cañadas.

It could very well be true, as far as the barren landscape is concerned.

Mind some of the terrain by the Teide really reminds us of a moonscape. 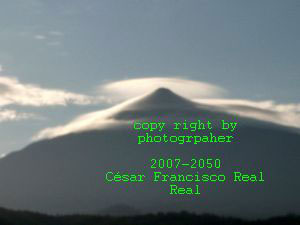 If you are very lucky you will get to see this Teide phenomena.

It's the strange form that hovers like a white disc above the Teide summit that draws our imagination.

I think it was late in the evening when this shot was taken.

Sleeping over at the Teide 'Refugio' Backpackers

This formerly very Spartan volcano backpacker center was founded by a British scientist in 1891. In 2007, it  was enlarged as well as modernized.

Now, it's bigger and better and has even heating but, nobody is allowed to spend more than one night there. Why?  Demand is very high.  The Refugio has a salon, dining hall, and first aid room. You may bring food and drinks to warm them up in its communal kitchen. Some drinks and snacks may be for sale, though. Three  bed rooms accommodate 56 people. There are toilets but no showers.  Nowadays, you are given comfortable bedding with warm winter duvets. This guaranties a good night's sleep.

The cable car station may be reached within an hour's walk. No park's permit is needed for those who sleep over and climb the summit from this Altavista Refuge Center before 9 a.m.

But,  be safe and have this confirmed before you go.

When not to go to Teide

Avoid outings to Teide on main holidays like Christmas, New year and Easter, when parking there becomes a problem.

Mind that the Teide highlands with their sunken crater are very famous... In fact, they were declared National Park in 1954 and World Heritage in Christchurch New Zealand by Unesco in 2007.

Equally crowded during public holidays is another very high and rugged mountain range of Tenerife.

From Teide excursions back to Tenerife attractions