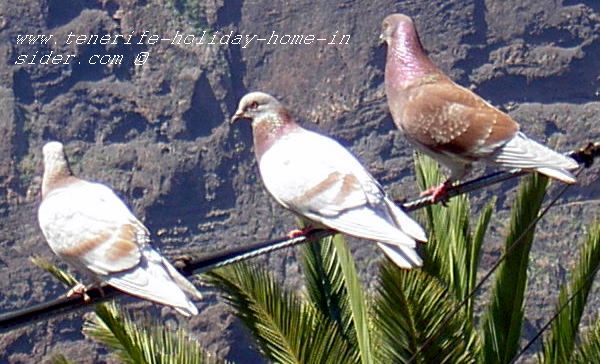 The so called endangered birds look so peaceful, as depicted above.

Yet, the three rare doves, two of which are almost white are constantly aware of danger. A charging falcon, and above all the Barbary falcon is a feared predator from the gigantic nearby Teno cliffs. But this is nature and therefor acceptable.

However, a government bill that ends or limits protection of Canary Island species for the sake of more golf courses is not OK at all. The Fish Eagle Osprey (Pandion haliaetus)will be doomed then, to give just one example. It's already almost extinct in the Canary Islands. Read about the dangerous Bill here.
More about the Osprey together with its large photo further down this page where more threatened birds are listed.

It's a bird of prey that charges with incredible speed. It can fly faster than 200km/per hour, in plain flight. Not supersonic, but scary...

Once, I was standing at a low wall on my property in Durban Natal. A very young kitten was near my feet.

I was peeling an orange. Suddenly, big wings with a menacing beak approached from high up. They came close to my face with lightning speed. I felt like a target. It was one of several falcons which forever circled our skies. Perhaps, it was an Eleonora or a Barbary falcon.

He wanted the kitten, not me. My companion came to my rescue. Again, the bird was gone in a flash. We had lost a young rabbit of our children already. Guess, how...

Falcon habitat of the Barbary species. 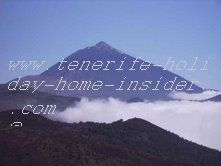 The Barbary falcon cannot survive on its own in real deserts but may adapt in Savannas. It likes the Macaronesia biosphere, where Tenerife is part of. It's also fond of some regions of Northern Africa, such as the Atlas Massif, of the Persian Gulf and the countries of the rising sun. Note that falcons have been the passion of the Sheiks and Princes of Arabia who have used them for bird hunts, prestige and more for thousands of years before they owned oil rigs.

The Barbary falcon of Masca is mostly at home in the Teide National Park , but he likes the Teno Massif, too. Falcons love patrolling in incredible heights. Their sharp eyesight helps. Not only the telescopes of the Roques de Muchachos telescope can see far.

The Barbary falcon one of endangered birds.

You wouldn't think that this bird is in peril. But it is.

Many other falcon species have escaped from private and commercial enclosures. The wandering falcon alias pilgrimage falcon is one which threatens the uniqueness of the Barbary, as mating between the species is not at all out of the question. However, this isn't the worst which could happen to a bird of prey like a falcon.

There are many endangered birds because of the Barbaries, as birds are all they feed on. 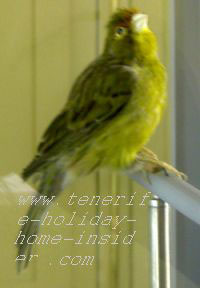 The Canary bird whose general habitat is in parks and towns is rather threatened by rats and cats then birds of prey. I watched it chirping away in 2010 in a Bauhinia tree by the abandoned Puerto Cruz bus station. I also spotted it here where it didn't seem to fear any peril. Regardless, there is always an exception. That's the Mountain Canary bird (Pajaro Canary del monte).

A nice trait by the feared Barbary bird hunter.

An incredible fact is that the Barbary falcon doesn't prepare for his offspring in the conventional way.  All he needs are small holes formed by rocks or crevices on a summit. An abandoned bird nursery by another species of similar size to its own will do.

His young take a month to hatch and are born between middle of February and mid March.

The majestic Barbary birds of prey have another astounding habit. Both male and female take turns to sit on their eggs.

Mind, you will often feel that pigeons or doves are intruding. I have seen one enter a shopping mall in Tenerife. Beware pigeons are carriers of disease...

Cooing and the Cory's Shearwater.

Doves can also go onto people's nerves. Their constant cooing may prevent a human from sleeping. They say this also about the marine bird Cory's Shearwater (Calonectris Diomedea) which is also on the list of endangered birds. Encounter it by the largest Tenerife coastal nature reserve the 49,5 hectare Rambla de Castro... Spot the imperiled Cory's Shearwater even under strong winds by the high seas by all Realejos seashores.

Pesticides like DDT and other factors are said to have killed it.

El Guincho Fish Eagle No.1 of most endangered birds of prey on Tenerife Island. 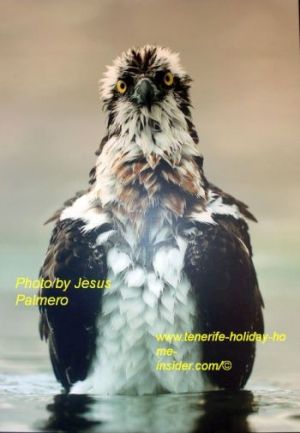 The Tenerife fish eagle is the most threatened bird of prey in the Canary Islands. Only 12 -14 pairs are said to be left. The Guincho, as called by the locals is already extinct on Gran Canaria, Fuerteventura and on La Palma.

Somehow, all Tenerife birds in peril which include the three lovely doves caught on camera by myself in Masca seem to thrive best free and and more unharmed in untamed surroundings.

By the way, not only many of Puerto de la Cruz are giving much priority to care for the environment. La Orotava was holding classes and day outings for children aged between 8 and 12 years during the last summer holidays. Endangered birds and other species were on their agenda.

Another passionate defender of care for the environment of the island's fauna and flora is Amaya Sáez a director of the Puerto de la Cruz clinic Arte Dental.

Sometime in 2012 or early 2013, it was said in the Media that the Loro Park Parrot foundation has spent € 14 million since 1994 for the protection and conservation of 100 species of Loros (Parrots) worldwide, many of of which are in danger of extinction.

The LPF of Tenerife to save Loro birds.

The world's most important efforts of conservation for parrots (loros) by the LPF Loro Parque fondacion (foundation) that spent more than $750 000 for the blue Spix alone besides fighting for the survival of all world parrots.

From endangered birds back to wildlife in Tenerife.

Find out a little more about Masca birds among other at mountain village Masca Tenerife information, which doesn't report birds in peril at this Teno location.

You can see a list of birds in top peril by www.buzzles.com/articles/.