Indeed, Canary birds are not total loners, but are not bad social fellows, at all. That's what you see here, as contrary to the rule.

Or is that just an excuse to put them into cages to keep them as solitary pets?

However, domestic bird hybrids and their wild cousins may differ somewhat.

Indeed, I caught two birds on camera. Actually both belong the the species wild Atlantic Canary.

Not a fantastic shot but one with a message...

The feathered creatures were singing happily together. It was a lovely duet.

All that happened outside the Hotel Maritim opposite the 'Beisbol' stadium of Puerto de la Cruz.

Amazing and astounding to believe...

There, they were frolicking in perfect harmony in a tree that had shed its leaves, while next door was a subtropical park.

Cars roared by. That traffic couldn't stop their concert.

The Canary Island birds in the wild had the most wonderful singing voices. A gift from mother nature...

By the way, those singing birds with the yellow front and brownish feathers on their backside live on all Macaronesian Islands in the south of Spain. Mind that the Cape Verde Islands have not been confirmed as Canary bird habitat as yet.

Want to hear one sing?

The above video gives good testimony of the Canary' bird's vocal talent, indeed. 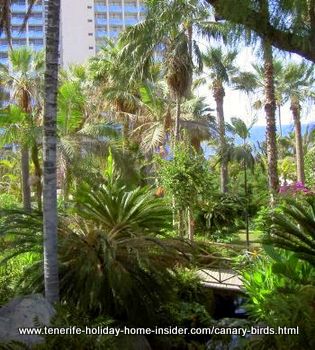 Why the Canary birds acted so strangely?

Birds need the sun vitamin D as calcium sources for themselves as well as for reproductions, hence for their eggs. It may be too shady for them inside the bird paradise park where they keep their nests.

What about Sepia stones for?

They provide calcium for domestic birds which originate from Tenerife.

All creatures above ground need calcium and sun

So that's why our singing birds were sitting in full sun on bare tree branches by a road where even big buses go past. They were not just tweeting merrily while enjoying an ocean view. They were sun bathing for health. Besides, they could always fly over the fence and return to their normal bird habitat with leafy shade.

They were the typical wild species of the Canary Islands. They were not more than 10 cm in height which is about 3,9 inches. Those Atlantic island Canaries had brownish faces where the color covered the throat but left the top, sides and back of the round heads in a golden yellow. Their bellies had the same color. Most of their backs were brownish. Brown is a good bird camouflage in the wild. A yellow back which is typical for the hybrid Canary would make them too visible to hawks and eagles from above. However, I haven't seen any in this coastal region by the busy 'El Burgado' road. Their beaks were slightly curbed but broad, contrary to those of birds of prey. 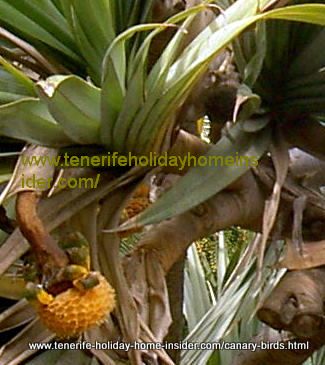 Bird food in a Tenerife park

What does this Atlantic Canary feed on?

The Atlantic Canary or Island bird of the archipelago where Tenerife is part of feeds on leafy plants or rather herbs and seeds.

Bird food from palm seeds is easily found in its natural habitat. In this case, within a huge and lush subtropical hotel park as well as by adjoining protected land near the sea shore where several indigenous herbs are growing.

However, you may also spot thousands of wild growing cocktail tomatoes over the road there, at some times of the year.

10 to 15 years may be the norm of the life span of those yellow, wild Atlantic Canary finches. They breed once a year in Spring when the day light lasts longest. It remains to confirm if that was a time when male and female birds also sing together.

Another spot with Island Canaries.

By the way, you may also find wild singing Canaries in the trees by the bus mile and its former station in Puerto de la Cruz which is also the town of the Loro bird park.

An Atlantic Canary in a Santa Cruz museum.

That's a stuffed specimen of the wild Canary yellow bird. It's also named the Island Canary at one of Tenerife museums in Santa Cruz capital called 'Museo del Hombre y de la Naturaleza' which means Museum of Man and Nature. Actually I should correct myself, as the most yellow of all Canaries is a domestic hybrid.

Why the hotel Maritim park is an ideal bird habitat.

The surrounding of the Maritim, as insiders call this hotel of Los Realejos, is perfect for tiny wildlife. This man made habitat for recreation is buzzing with so called aves of all sorts and butterflies that visit its flowers,
berries and seeds. Little ponds by tiny bridges invite for bird bathing.

The park which looks 3000m2 big is in a secluded spot which is flanked by two large hotel sky risers as well as by the 'Punta Gorda' cliff near beach 'Playa de los Roques' and all its natural wonders.

Find more information about bird seeds of the bird habitat of Los Realejos by Hotel Maritim...

From Canary birds back to wildlife Tenerife of the Canary Islands Spain.