Horatio Nelson, a tough opponent for "a match" with tiny Tenerife.

Horatio Nelson may have been a champion in a different field nowadays.

However in his era, the Royal Navy was ideal to provide glory and riches. 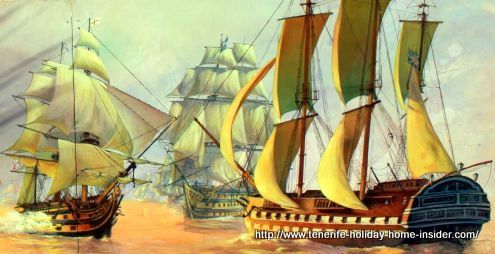 Horatio Nelson a city street art mural on a bridge in Santa Cruz de Tenerife in memory of his defeat.

In 2017 on July 25, the 220 years' anniversary of the  Tenerife victory was celebrated in Santa Cruz by various events. Two city street art murals referred to it. Part of the fighting was reenacted in the old black Fort of Añaza. Another show was staged by the Circulo de amistad an elite private organization.

How Santa Cruz de Tenerife suited the ambition of a British sea admiral.

Then in those days, Santa Cruz de Tenerife was a little pearl in a vast ocean of an archipelago of seven isles.

It was interesting to catch.

In 1797, valuable freight from America was expected to arrive in Tenerife. That was one more incentive to sail to the Canary Isles. Besides,  Santa Cruz looked like so easy to take.

Two frustrating trials to conquer led to a third one on July 25,  two days later. All happened in the Atlantic ocean by the three depicted forts. 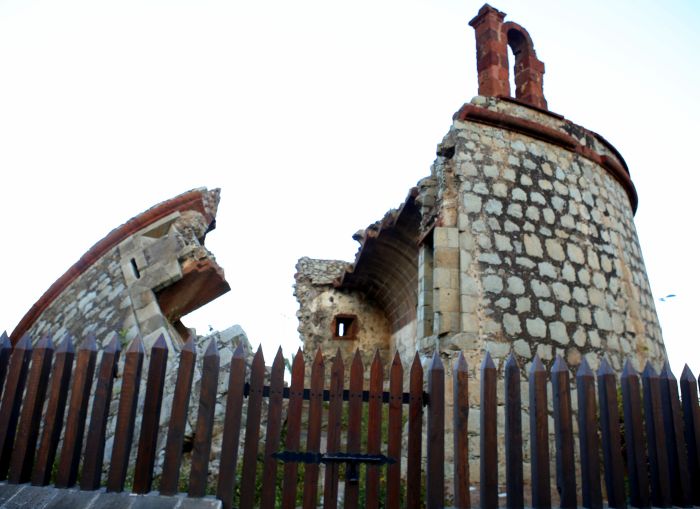 However, the daring frontal attack of Santa Cruz by the Castillo Negro did not work out as a brilliant stroke either.

Horatio Nelson was well equipped for a swift navy battle match. Fighting on land was not his expertise.

Indeed, witch stories took their tool, such as those about the witches of the Bufadero by the Castillo San Andres.

Adding officers and captains would bring up the squadron's manpower to about 1300 by the utmost. In fact, Plan 3 was to send 1000 soldiers to take Santa Cruz, eventually. This seemed to be enough, as the Tenerife port was a mere fishing village with hardly any military at the time.

Tenerife's hero of the 25th of July.

Meantime, a man by the name of Don Antonio Gutierrez de Otero coached his people well for the fight against Admiral Nelson.

Gutiérrez was born in Burgos, Spain on May 08, 1728 to a father, who was Colonel of Infantry. He sent his son to a military academy when he was only seven years old.

Commander Gutierrez Don Antonio managed to organize 1700 men and many transport mules for the defense. Mind that the nearby capital San Cristóbal de la Laguna, the  county Aguere as well as the whole of Tenerife were also at stake. Some French and Italian hired soldiers were waiting on stand-by together with the Santa Cruz "Chicharreros". Also country people from all corners of the former Guanche kingdoms was joining.

Man with a sickle

The depicted peasant was one of many volunteers soldiers who were ready to die for their island.

Men were strategically placed on hills, such as by the  Castillo de Paso Alto or by Castillo San Miguel. The latter is gone. Little is left of the other. A good view of Beach Playa Valleseco the area by today's yacht club was possible from there.  Others were hiding by the small fort San Andres by the Barranco Bufadero. Many were stationed by Castillo San Cristóbal and by the Black Fort.

Important start of the fighting at San Andres.

Canons fired from Castillo Torre San Andres are said to have destroyed part of Admiral Nelson's fleet. This was a very important psychological momentum.

By the way, this fort was destroyed by heavy floods from the nearby Barranco gorge again and again. Only a ruin is left of it.

A fresh start to take on the fight.

Two days after his first lost offensive at San Andres village,  Horatio Nelson tried again. His soldiers bravely crossed the Santa Cruz Bay and were heading for a daring land attack.  The British admiral didn't score but,  Santa Cruz did. It won again. 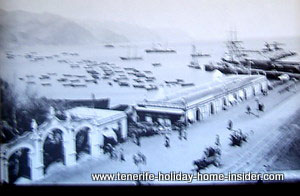 The walls of Castillo San Cristóbal and its fort were facing the quay.

Attacks were suspected, there.

They stood the test of time. See what's left  as handsome ruins together with Spain art by clicking here which represents the historical Guanches on Plaza de España.

The Milanese Chief engineer and Colonel Louis Bontempo who was of the same age as Don Antonio had cooperated well for a better fort. This Italian was also familiar with the fame of Horatio Nelson and could but admire him. 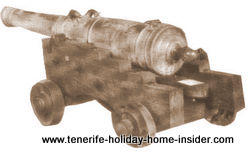 The decisive moment of the battle of 1797.

Thanks to a canon, fate assisted the fiercely fighting Tinerfeños who had spread out their defense well.

Dreadful grape ammunition which was used with the bronze tiger canon from Castillo San Cristóbal was an ugly incidence of the whole match. 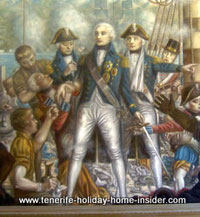 The defeated British admiral injured in Santa Cruz by oil on canvas painting.

The canon hit Horatio Nelson and damaged his arm beyond repair.

But the spirit of the hardened Admiral, as depicted beside, wasn't broken.

Rather rare generosity toward the losing party.

Gutierrez had no bad feelings for the British Admiral. To the contrary, he admired him, as did most of Europe.

Instead, the Tenerife commander used every possible diplomacy to end his victory of the 27th of July to achieve lasting peace.

The brilliant strokes of Gutierrez which paid off.

The wounded admiral who was later knighted  by Queen Elizabeth the Second was allowed to leave for surgery on his own flagship.

No prisoners of war, arms or medals were taken. The only trophy which is still spread out on a table of the Military Museum 'Museo Militar' on the bottom of the fabulous Avenue Rambla Santa Cruz is a huge flag which Lord Horatio Nelson had to leave behind as a victory token. However, some of the navigation charts shown at the museum date back to the time of the Santa Cruz attack by Horatio Nelson.

Back in England, Horatio's 250 men lost in action were given honors while 128 wounded were happy to be alive. They all had a welcome of heroes when they left the schooners which the generous Don Antonio De Gutierrez had provided. Horatio Nelson who had already lost an eye in a previous battle was now also a one armed champion.

All this thanks to the wise, diplomatic Spanish lieutenant Gutierrez, although he was ill at the time of the attack.

In fact, the Spaniard saved England's face as well as Tenerife's future with almost unheard of fair play.

Most importantly, Santa Cruz could now prosper in peace which was the best victory of all.

Loss of life within the Spanish ranks amounted to only 30 and the number of wounded was a third compared to the British loss.

Don Antonio died in 1799 due to sever asthma. Indeed, the Tenerife military commander has much to be thanked for. He never took that rest when he was ailing for the sake of his country.

A history emblem 1797 celebrates the Tenerife victory of the battle of three rounds with three lion heads in its center.

After a year of recovery, Admiral Nelson reached more fame. This has been commemorated by the Obelisk of Trafalgar square until today.

A French sharp shoot sniper killed the famous British admiral on October 21 of 1805. He left his big love Lady Emma Hamilton, whom he had met late in life, but no sons.

The capital of Tenerife Santa Cruz

The village San Andres by Playa de las Teresitas beach
From Horatio Nelson back to history of Tenerife.