Beware witch hunts off the Bailadero and historical facts...

It is too true that witch hunts are usually associated with aggressiveness towards witches or as a term in a far broader, more dangerous sense.

However, there were different kinds of hunts. They were conducted by so called bad women in Tenerife.

Domingo García Barbusano gives you many facts of old Canary Island beliefs concerning the witches of the Bailadero, a possible location of which is portrayed below. A cyclist pointed it out to us. However, no sign by the wayside confirms this exact spot of El-Bailadero of Tenerife witches of the Anaga. 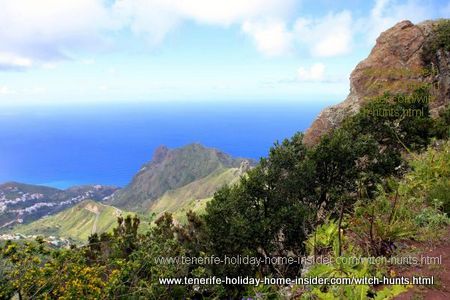 El Bailadero of Tenerife witches of the Anaga Massif

Don Domingo even says that they were having their witches' coven in a valley high up between San Andres and an Anaga mountain ridge. This is in the Northeast of Tenerife Island in the green mountains of the Anaga Massif.

Also, he emphasizes that many clues were found by archeologists which confirm witch rituals of the whole area.

He warns you about the hunts they undertook not far from the village San Andres. The mischievous women and girls were rumored to silently comb the slopes below the Bailadero for lone men whom they would encircle and then harm.

Barbusano also tells you that the witches of the Bailadero near Taganana liked black coats and capes while not wearing anything for their ritual bathes at the nearby beaches. The closest seashore was certainly one of popular Tenerife Beaches Playa las Teresitas beside the village San Andres. Find a link with more information about this beach below at the end of this article.

Witch hunts and negative repercussions for intruding onto Guanche sacred ground was certainly something which should have crossed the minds of the brave marines of Horatio Nelson in 1797 in that July night when they attacked Santa Cruz. Mind that they first went for San Andres which was below he witches' Bailadero.

History tells us that Horatio Nelson had sent marines up onto the slopes of the gorge Barranco Bufadero. It is possible that they could sense witches approaching from above. The men are said to have felt the spookiness and the danger of the place.

The fact that they may have trodded at night on sacred grounds near fountains of former Guanches certainly didn't help. Archeologists found several traces of Guanche rituals in caves of the area.

Even the famous San Andres Guanche mummy comes from there.

Do witch hunts belong to the past?

Nobody may be sure about the witch hunts having stopped. Sometimes they are like being dormant, some say.

They are certainly living on by a the carnival of Guimar. There, a witch hunt spectacle takes place at night. It's dedicated to the Burras de Guïmar. 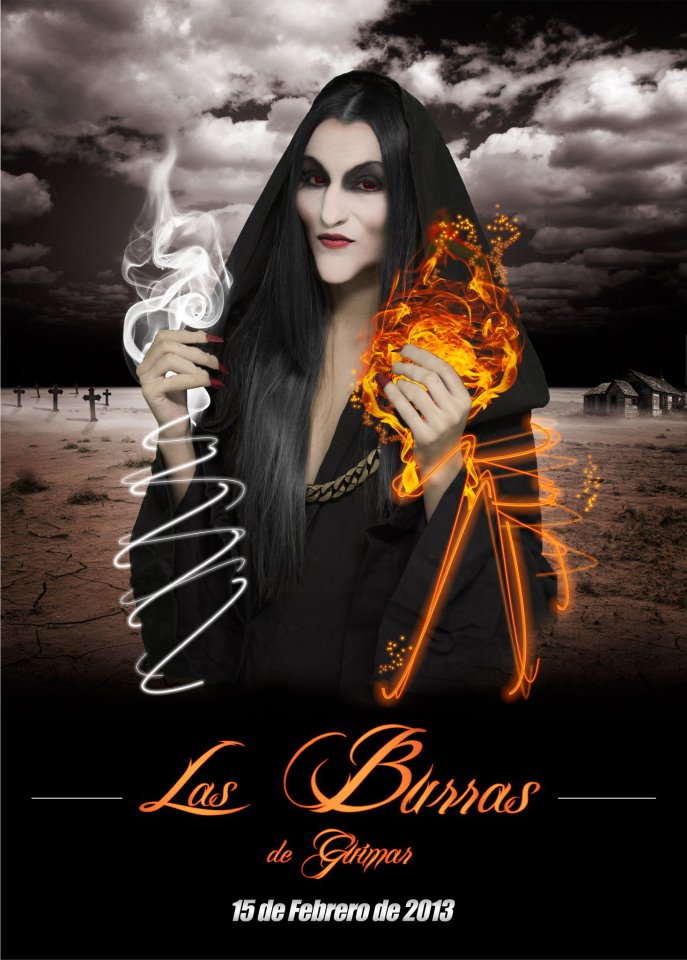 Princess Guacimara of Anaga in 1496

On the other hand, the men of the Tenerife conqueror Adelantado de Lugo talked about the occasional Tenerife amazons. For many it is difficult to draw a line between witch and amazon.

The beautiful princess Guacimara of Anaga was seen as an amazon as well as a witch by some.

However, there was nothing creepy about her.

The Anaga or Daute area is one of few places where Guanche family names are still around. The name of Ibaute of Don Diego Ibaute is known there. However, no witch hunts have been associated with that family, ever.

There is a haunted house called Casa Lercaro in La Laguna, not far from San Andres and the Barranco Bufadero. A lady ghost called Catalina is rumored to make its rounds. Strange noises and other occurrences have been taped on video at that site. Videos about it are filed in Youtube.

More about Horatio Nelson's attack on Santa Cruz, here which happened at a time when many talked about the menace of the men hunting witches.

From witch hunts back to Tenerife beaches Las Teresitas,