Playa Las Teresitas beach had a total revamp in 1973. At that time, the capital of Santa Cruz de Tenerife made history again.

It not only converted its town seashores playas las Teresitas into one playa which means one single beach. It did much more. It also built a 150 meter long parallel jetti, contrary to different breakwaters of other Tenerife beaches. The latter are not providing protection from the front. And, the most sensational was the addition of shiploads full of Saharan sand.

The golden desert sands gave the ocean side by Santa Cruz San Andres a Caribbean look.

One may wonder if the locals, who love to spend most of their holidays by the shores of San Andres Tenerife, would use them less if the beach sand was still black.

Of course, Santa Cruz residents would love their Playa las Teresitas without white sand just as much. The Portocruzeros adore their black beach landscpapes of the three Playa Jardin beaches which are a brainchild of the famous Cesar Manrique. Mind that this landscaper could have redesigned the Puerto beach as a single one but, he didn't. One may wonder if the different approach to beach redesign was not just a financial question. Buying and transporting gold coloured sand from Africa was certainly not cheap. 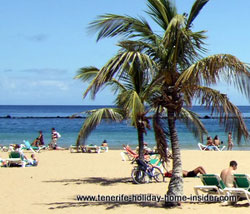 Indeed, Tenerife environmental awareness, such as by Puerto de la Cruz was unheard of in the seventies when the Island's tourism took off at high speed.

In fact, environmental concerns because of planned Teresitas changes put almost heads on fire within Santa Cruz town planning circles. At that stage much more new infrastructure than the parralel breakwater of Teresitas was suggested.

And then came the incident with the funny foam. It proved to be bacteria on the Teresitas water surface. The blue beach flag for safe environment Teresitas went down the drain. Never mind, be your own judge and look out before you swim. It is very unlikely that this situation will repeat itself, as fingers were pointed to a very possible culprit, you may imagine.

By the way, the Teresitas bay of San Andres was once called the Pirate Bay until the Torre (tower) or Castillo (fort) of San Andres was built. It then helped not only to defend the main town Santa Cruz Tenerife against all kinds of pirates but also against Horatio Nelson  the admiral from Great Britain who lost an arm in Tenerife.

The witches of the beaches Teresitas Playas:

There were also the legendary witch hunts above San Andres in the mountains by the Teresitas beach. It is of special historic interest that the seashores below the Bufadero by San Andres are rumored to have been part of the witches' coven.

Perhaps, we wouldn't be kidding to think that a witch whose picture beside is a carnival costume, is more exposed in her alleged Adams' attire by a single Teresitas beach than by three. More than one beach is also likely to have had charcos (natural pools) with more visible rocks in the water as well as by the shores. Unfortunately, no old photos show, what Teresitas Playas looked like before 1973.

From Playa las Teresitas back to Tenerife beaches Playa Las Teresitas with exotic sand. to discover beach photos and to learn more about this seaside which is still one of more virgen beaches despite its golden surface.

Name me an island like Tenerife of Macaronesia where so many beaches were changed to have different looks for the sake of tourists or the economy... Contact Tenerife holiday home insider and let us know...