Reyes Magos Tenerife and the other Christmas

Reyes Magos Tenerife with the Three Holy Kings the Magi also known as the Three Wise Men from the Orient takes place on January 06. It is the main and the traditional Christmas in Spain. 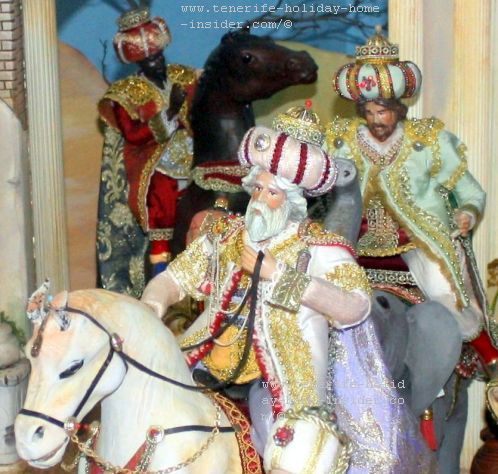 Reyes Magos Tenerife the real and traditional Christmas on the biggest Canary Island of Spain where the appearance of the Oriental Magi may vary in villages and towns, such as seen here in Los Realejos on horseback

Nowadays, led lights a cheap investment replace candles which all use inside and outside in order to prevent fire.

The parades of the Magi the Cabalgatas on its Eve on January 05 are eagerly expected highlights by local families with small children. These spectacles should be seen by foreigners, at least once. 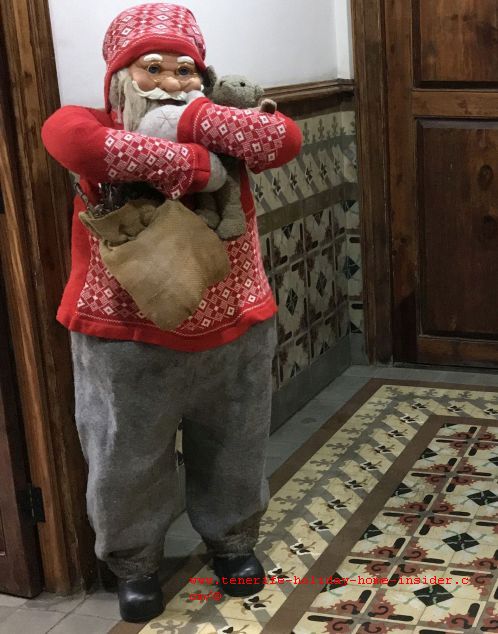 In fact, children send their cards with their Christmas wishes to the latter as well as to the Reyes Magos. Gifts by both are said to be dropped off the morning after December 24 or after the Eve of Reyes of January 06.

Both December 25 and January 06 are main holidays in Spain when almost nobody works. However, family gatherings with good meals are on both Eves as well as for lunch on the days after. Midnight mass Vigils of Christmas Eve only take place in bigger towns by the year 2018. More of a norm is now a mass at 6.30 p.m. The reason for this change is because people generally work normal day shifts just like Titsa transport on both December 24 and January 05. However, mind that most restaurants shut their doors by 10 p.m. 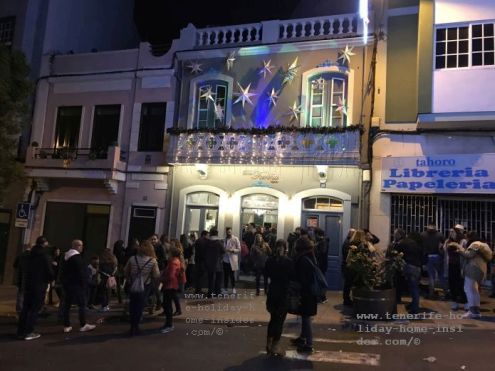 On January 05 after the Cabalgatas, bars stay open much longer.

Of course, Santa Cruz the capital is leading. There, the demand for tickets at its big sports and events stadium Helidoro Rodríguez rivals the entertainment of important soccer games. So buy your chance for Euro 1 fast to see the arrival of the Reyes by Helicopter. Camels then take them to lead the street parade the Cabalgata. Buy tickets directly at the stadium counter from January 03 onward or in other spots

None is better than the other. The celebrations are simply different which is a reason to experience both. The same would apply to Los Cristianos, by the way.

El Puerto has a fairly big foreigner community besides tourists.
This rubs off on the Cabalgata spectacle and everything seems to be a touch more orderly. Of course, kids and their parents jump to catch sweets but the event remains almost low key. La Orotava, to the contrary almost gets out of hand in some areas like Calle Emilio Luque near the Auditorio Teobaldo Power. 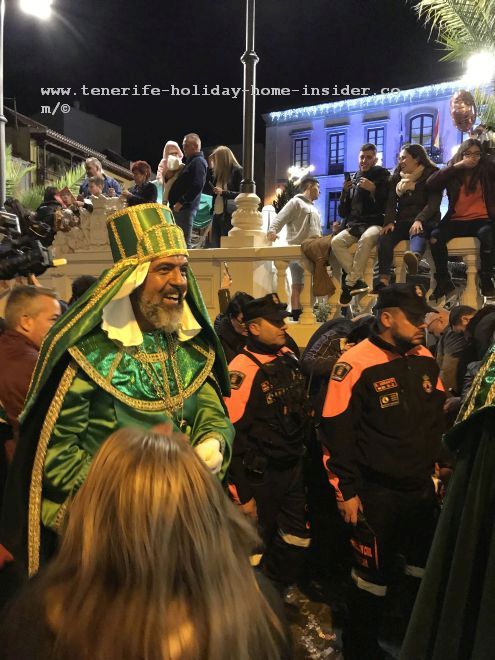 There, at one stage, I wasn't sure if thousands were cheering the parade girl in her belly dance outfit or one of the three wise men the Oriental Magi Kings on foot. This Rey of the Magi almost mixed in with the crowd, down to earth so to speak. . Anyway, the applause and engagement for the Reyes Magos Tenerife of Orotava hardly stopped in this part of town.
A contagious affair of extraordinary excitement, no doubt. 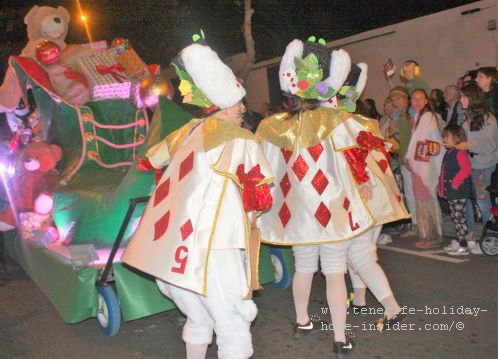 Reyes Magos Cabalgata parade Puerto de la Cruz with an almost carnivalesque appearance in some parts, such as here

Its Reyes parade always portrays much artistic skills that remind you the fabulous Puerto Cruz Carnival as well as of La Mueca street art festival. In El Puerto, the Three Kings arrive at the former pirate defense fort at the Barranco San Felipe. 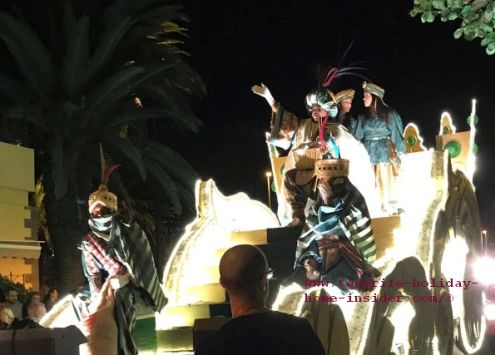 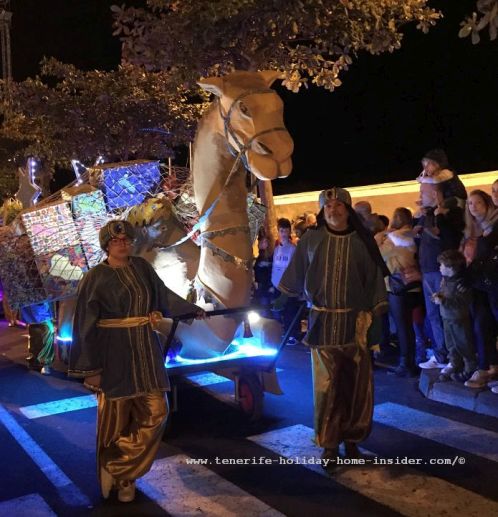 Their coach transport is done with royal floats. Palms and lush greenery render the extra tropical touch. The variety of the convoy participants is breath taking.

Colors, Gold- and Silver glitter and sometimes there are special machines on floats. They gush out white Lametta that looks like a snow flake storm.

Persons of the parade dressed according to the custom in the days of Christ's birth are a must. So are huge carts loaded with parcels that symbolize the Christmas gifts. 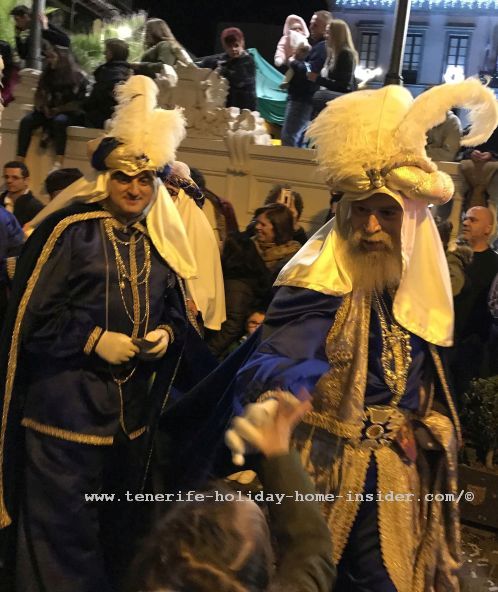 All Magi the Reyes Magos and or their helpers shower bystanders with tons of hard or soft candies. It only stops once they reach the spot of adoration of the new born king Jesus Christ. This happened in front of La Orotava's town, a glimpse of which see in my following video.

Street musicians of all sorts are not amiss in any of the convoys of the three wise men on Tenerife Island. Even a Rock and Roll band can show up on a wagon before or after the kings. Charity gift distribution may play a part too. Of course nowadays, TV channels record the much loved events. 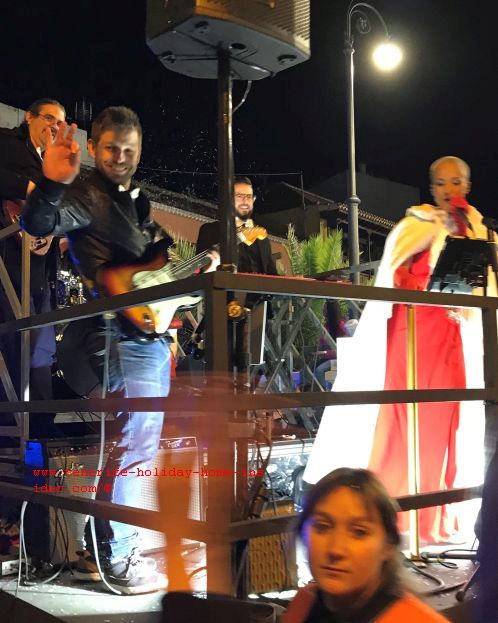 From Reyes Tenerife back to Tenerife Christmas which includes many details about the Reyes parade in Puerto de la Cruz. Also discover links of more traditions of the season for the biggest Canary Island by Christmas photos, nativity art, Roscon de Reyes Fiestas, outside Christmas decorations, lighting as well as all sorts of events like concerts and much more.