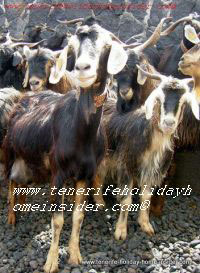 Click the goat picture of a she-goat, beside to see this entire animal in the forefront of a herd better... Her udder gives her away as a female. Admire her fur! It is black-brown and mixed with copper-red on her body. It looks like the she-goat had a Loreal hair shampooing for red highlights by her hips.

The photo of the she-goat with the French designer shampoo fur doesn't portray the most beautiful goat. But it's a very pretty specie of Tenerife's hoofed mountain and gorge climbers. In any way, it appeals to me more than Picasso's she goat which is a sculpture.

I captured this Tenerife goat on camera during the goats bathing of Fiesta San Juan on June 23, 2011 in the town which was once the Orotava harbor where no goats are seen in the rest of the year. This nanny goat was almost lady-like with her quiet manner, contrary to some billy and other goats of her herd which stroke me as boisterous and noisy.

By the way, there were no guard dogs with any of the animals which included horses during the goats bathing of Puerto de la Cruz. I didn't even see a herdsman with my she-goat's group of about 20 goats. By the way, no dogs are allowed on beaches of Tenerife. 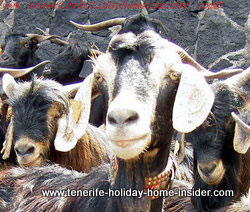 Click the goat picture to get a close-up of the animal's head...

My favorite goat image of a she-goat is one of Tenerife's goats of the mountains. The animal's black and white face with the big floppy ears almost has a Mona Lisa smile, while her eyes are a bit yellow. Their pupils don't have the very typical square goats' eye shape. This close to wild animal with the friendly expression and colorful necklace has no horns. I would be tempted to get a goat like that, if we had bought a specific a Tenerife finca which was a renovator's dream. There it could have made one of ideal pet goats. I most probably would have rubbed her fur with Frontline or a similar a similar dog flee repellent to keep the nasty insects as well as ticks out of her beautiful fur.

Only some Canary Island mountain goats are disbudded. It's done to stop growing their dangerous head gear. Tenerife goats are usually getting this treatment by their herdsmen. The earlier it's done the better. In fact, goat horn removal or dehorning is a must for pet goats. I saw a big hornless mountain goat in Tenerife with collar and dog leash, a few years ago. A man with his young boy walked his pet goat down a Los Realejos Romantica-1 very steep gorge. La Romantica is close to La Longuera the Realejos long mile road of Toscal which is known for Tenerife business as well as semi rural Tenerife and holiday villas. By the way, disbudding is a must with all goat pets.

From goat picture back to goat keeping by Tenerife villas.