Where Tenerife eating out was best for seafood and fresh fish 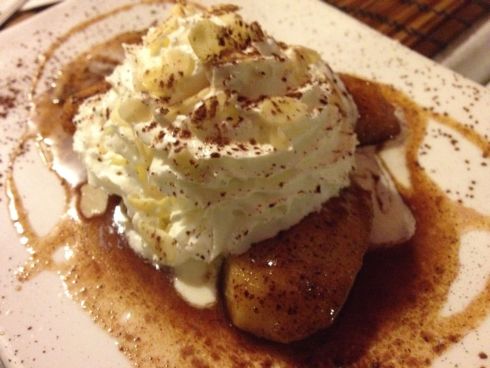 Tenerife eating out for fish and delicious dessert

Tenerife eating out for seafood and delicious desert used to be very pleasant at the rustic Tenerife restaurant Restaurante Tambo. However, it changed owners again in Spring 2018 is now called Restaurante Marlin.

Marlin is the second owner after Tambo's.

Not to forget were its peaceful surroundings by rough seas of Atlantic waves and great vibes.

Anyway lets now give credit to the old Restaurante Tambo or Tambos. 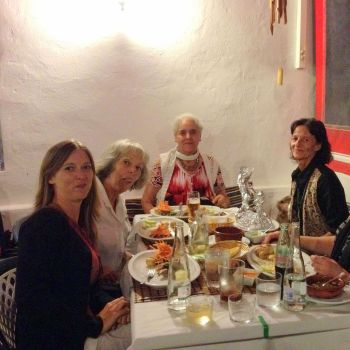 Best enjoyed on the veranda as depicted beside.

In the past, the quality and good standards of the original owner were taken over by a good family, while staff brought in refreshing novelties with a happy flair of progress.

Please check it out for yourself... The previous owners of the original Restaurante Tambo whom I met a while ago were positive. They believed that the quality of the cuisine was unchanged. That was before 2018. 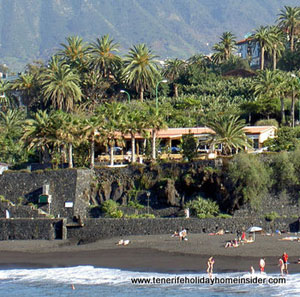 I know a young, Cuban doctor who is a GP in Puerto de la Cruz. This beautiful medical general practitioner endorsed the Tambo place for its fresh seafood, always. She and a friend wouldn't have their Vieja which is a local fish, their Dorada or any other anywhere else in town, she told me.

This terrace of Restaurant Tambo gives you a lovely sight of the ocean and a stunning view Playa Jardin. 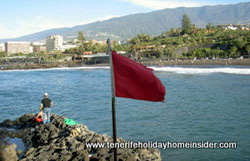 You often spot a red danger flag on top of rocks while at Tambo's fish restaurant for Tenerife eating out. The red alert is meant for swimmers by the seashore and for fishing folk as well.

However, some tourists had climbed some rocks opposite Tambo's restaurant. Later we spotted their rods for fly fishing, nevertheless. However insiders, such as the staff
of Tambo's know that the good spots for Tenerife fishing are hidden behind their restaurant. That is also part of the so called Punta Brava side which is off the beaten track.

The address for Restaurant Tambo

It is very likely that different fish dishes will be available at Restaurant Tambo, as the market constantly changes. Find more edible fish and seafood named under the section ocean wildlife of Tenerife.

What is special at Tambo's?

The availability of above seafood is subject
to market supply and its prices.

Fish for Tenerife eating out at Tambo's
is generally prepared a la Plancha. This is sort
of a grill board where hardly any fat is used.

Seasoning is kept to a minimum to preserve
the characteristics of the seafood.

Fresh salads and Papas arrugadas (steamed small
salted potatoes in their skin) are usually served
with the fish.

Taste Marinated sardines made in old Venetian fashion which are fit for kings. 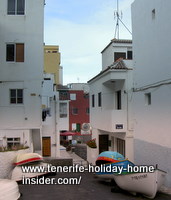 How get to this Tenerife fish restaurant by Tambo?

One option is to climb around the cliffs at the end of Playa Jardin at its Punta Brava section. This is not too big a deal when the ocean isn't rough.

Or enter the fishing hamlet at the end of the Puerto Cruz garden beach until you see fishing boats in the road by Playa Chica. Walk down the steps and turn left around the cliff.

Also reach Tenerife eating out at Restaurant Tambo from opposite Loro Park by the big church of Paroquia Santa Rita. Follow a straight road in the direction of the sea. Ask for Restaurant Tambo when you have reached its end.

More places for Tenerife eating out with fish

Restaurante Aguamansa Tenerife for eating trouts. From Tenerife eating out back to Tenerife restaurants which are numerous and often very good all around Puerto de la Cruz.

Restaurante Casa Julian which is of a medium price class at the end of Playa Punta Brama of Playa Jardin.

Restaurante Tambo is under new management from what I've learned when I met its previous owners. Not only a new chef may have brought some changes to this former superb seafood restaurant of Tenerife. I didn't have the chance to test this off lately myself.

However, I didn't see the name Tambo in big letters on the building when I passed by early in May 2016.  It's still on all menu cards, though. 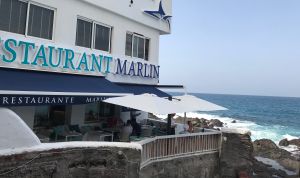 Tambos is now called Restaurante Marlin since about April 2018.
have not seen any staff or owners of Restaurante Tambos there. I was going to order the Pasta Seafood that was so delicious at Tambos. I wasn't happy with the way it looked with scarce seafood for example when I saw it on a person's plate at Restaurante Merlin in September 2018. It seemed to be most economical for Euro 13, though

Anyway again in 2022, I wondered if the fame of Tambo's restaurant for its fish in Tenerife hadn't changed. Why? A friend and I went there for a drink. Hardly any customers were there. However, a new place next door called Pfälzer Stübchen had many. You should find out yourself why those people seemed to ignore Restaurante El Marlin. The coffee was very good, though. Also, the price of the tiny coke was worth the ocean view.