Once an off the beaten track pirates' secret? 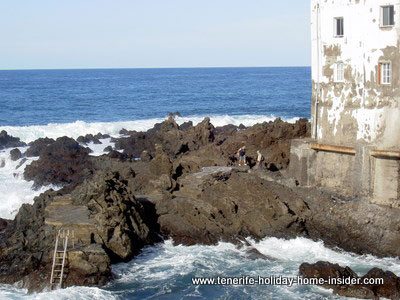 Off the beaten track Punta Brava

Off the beaten track was the description for locations which pirates loved.

There are several of them on the biggest of all Canary Islands.

Santa Cruz de Tenerife capital had more than one, such as near San Andres.

The Tenerife pirate Cabeza de Perro had its own secret landing bay by the coasts of the Anaga.

Many such hardly used spots were known to the most famous, as well as to Horatio Nelson. Those were the locations which Corsairs could use without being easily detected. The only problem was often a rough coastline. The intruders had to find a convenient spot.

One of such dangerous shores was in Puerto de la Cruz. It was named Punta Brava (Brave point) for good reason. An unlikely spot for pirates to get into town, though.

To hide there would have been a different matter. 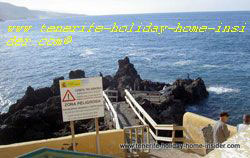 Generally, the disadvantage to be out of the way from prying eyes meant risky piloting for boats. Why? Too many submerged rocks with pointy menacing edges were not always visible early enough.

Notice the huge sign post which reads
"Zona Peligrosa" which means danger zone. It shows why this picturesque location of Punta Brava Puerto de la Cruz is normally not on tourist maps.

However, people love challenging geography. They don't just want to admire the Punta Brava skyline from a safe distance,  as portrayed below. There, they want  to hike, to cycle or to fish off the beaten track.

There is more than one entrance to this fishing hamlet.The most picturesque is to be found a mere 5 minutes on foot from Loro Park in westerly direction. It's right next to a tiny chapel. 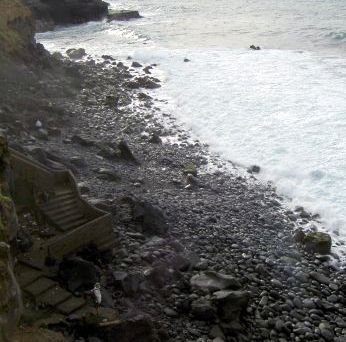 The depicted Punta Brava stairs are kind of a puzzle.

Why are they in such an awkward spot?

For fishermen to climb down to the shore to collect crabs?

I have never seen boats or the like there either.

Mind that it's quite an elaborate staircase made of solid stones.

I shall keep you posted, in case I can solve this riddle.

So why live at Punta Brava?

Tinerfeños have stayed there only since the early XX, while very little is known about its former Guanche residents. All have done so for the love of the sea, for convenient fishing and for peace; never mind the pirate threats in the olden days.

Off the beaten track, as one of life's controversies

Stroll along its narrow coastal road high above steep cliffs, once you've discovered the gap to get there.

Then take a relaxed walk along many colorful,  but humble fishermen houses. Some were even built high up into the black, volcanic rocks of the sea. No real traffic from cars will disturb your contemplation of the wild Atlantic. Meantime the blue waters are framed by the most picturesque village seafront. It' a scene to be painted.

Indeed,  many hideaways of part of Punta Brava of Puerto de la Cruz are treasured by fishermen.

Also there, encounter an insider restaurant for  eating out with delicious seafood.  It's by a tiny bay which you would hardly find if not told. There's one more excellent alternative next door, by the way.

More about the Spanish coastal law by an article by the UK Guardian newspaper.

From off the beaten track back to Puerto de la Cruz