Punta Brava cliffs are being taken care of

The Punta Brava or Puerto de la Cruz Brave Point with its magnificent cliffs isn't only loved by locals, such as the hamlet's fishing folk who lives there. 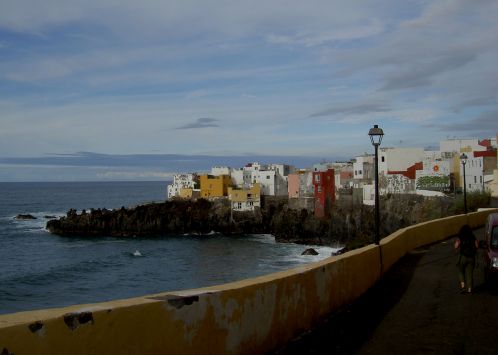 Punta Brava with its Calle Tegueste of Puerto de la Cruz which has been a pedestrian zone only since 2015. The rocky outcrop where tall, multi-colored buildings were constructed high up into the steep cliffs is most picturesque.

Tourists who have discovered this part of Puerto de la Cruz always return to this off the beaten track. Hence, it must be  maintained which is the case right now. 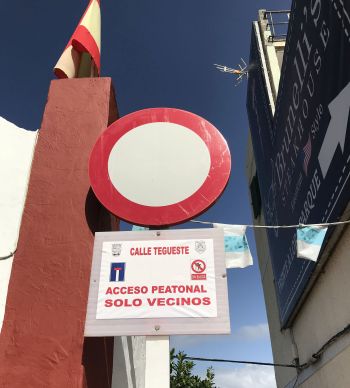 Various kinds of works to the entire ocean front will go on for another six weeks.

Indeed, the residents who had been evacuated could return to their houses at #19, 21 and 23 on November 21, 2018. Mayor Lope Alfonso had announced this a few days before. He also told the Media that all the cliff stabilizing that amounted to Euro 1,5 Million was a tremendous success. Mind that these were really good news. Why?  In fact, the rogue waves of El Bravo that caused substantial damage in several parts of Tenerife Island in November 2018 didn't leave any negative signs on the repair works of Calle Tegueste.

What makes Calle Tegueste of the fishing hamlet opposite Loro Park so special?

It only has about seventy dwellings. Most have less than three stories and hardly more than 10 meters of house front. There is no traffic noise and no pollution.
Occasionally, evergreen Tamarix bushes are tucked into its black volcanic cliffs. 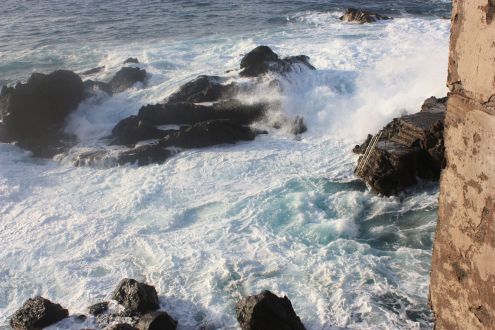 There, the wild Atlantic doesn't only inspire admiration, as it can also cause damage to the rocks to such an extent that it undermines the coastal road. 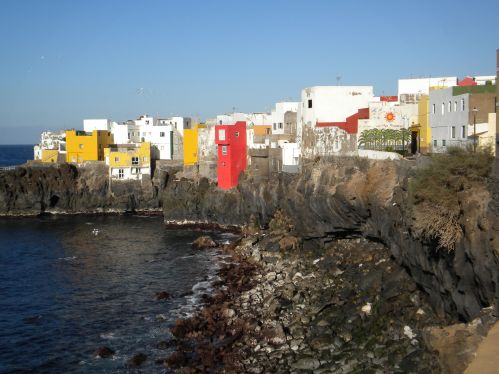 Punta Brava cliffs of Calle Tegueste near house number 67 where rocks have broken off over time. 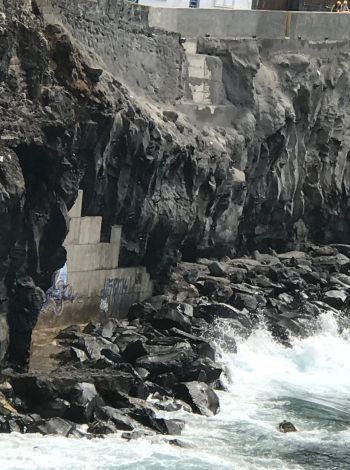 There, a cave has been fortified.

This happened long before 2018, as I remember well.

Also, there's already Graffiti on the concrete that was placed as reinforcement, as shown.

Further down the road over time,  the ocean had been eating a big hole into the rocks of the cliff.  This caused a tear in the asphalted road on May 13 in 2015.  It took up a section of 20 meters in length and more than a meter in width. Parts of it together with a wall section tumbled down the cliff. 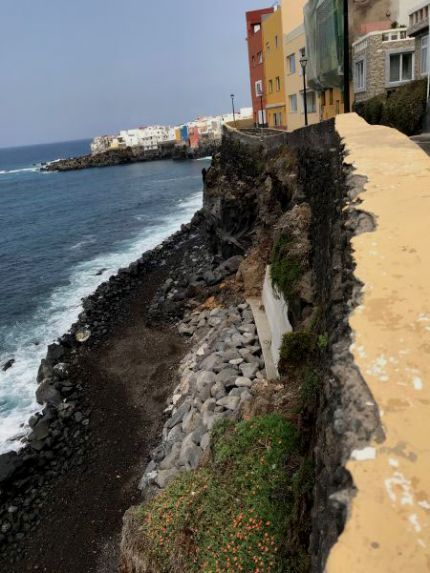 Calle Tegueste Cave repairs underneath by reinforcing with a concrete wall. Also, note the long breakwater with boulders by the water's edge

Later, there were road repairs and much more, as portrayed above.

I spotted a very tall crane on August 17, 2018. It placed big boulders onto the seaside below the endangered coastal road. They came from a huge truck that was parked on an empty terrain beside a little chapel by the main road. This is the subtropical garden access point to Calle Tegueste opposite Loro Park.

Punta Brava since the Seventies 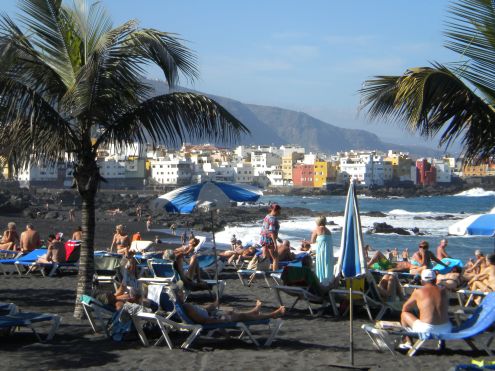 This tiny village at the end of the long beach only became a tourist attraction in the last three decades of XX. That was after the remodeling of Playa Jardin by the landscape architect César Manrique. Also Loro park tourists started to discover the hamlet over the road where delicious fish could be savored.

By the way, this enclave of the fishing folk at the end of Playa Jardin was still called Maria Jimenez in 1905. Then, it only had five houses by a sand road outside Calle Tegueste near today's church of Paroquia Santa Rita. In those days, all terrain from the gorge San Felipe inluding today's Loro Park as far as the Burgado opposite Hotel Maritim still belonged to Los Realejos.  No Spanish law of the coast (Ley de la Costa) existed. The latter forbids all structures within 30 meters from the seashore. 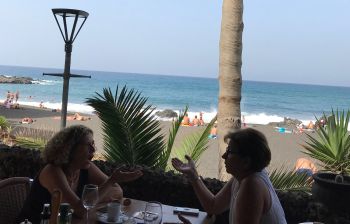 Casa Julian oldest Punta Brava restaurant on the beach by that name on Playa Jardin. Locals forever eat anchovies there while I favor its big salad plate which contains Avocado, lattice, fruit and more.

Talking of history,  a couple of restaurants need to be mentioned.  Casa Julian isn't the only house with a kitchen built into lava rocks in this part of town.  It dates back to the first or second decade of XX. My friend Jetty Henriette Hinder introduced me to this place in 2003 when the terrace was still in the open.  Then, there was Casa Maria further inside the hamlet.  Maria's was a small place and you felt like eating in a fisherman's family room. Seafood, such as prawns were very popular there. Maria's place has gone and so has my friend Jetti, unfortunately. Maria was in her Sixties at the time when we celebrated birthdays there. I also miss very much Tambo's restaurant for eating out seafood which may have relocated to Santa Ursula. I know that there is Restaurante Marlin in Tambos place, now.

The hostel is at about midway at number 12 at Calle Victor Machado which is portrayed below. This tiny hotel whose roof top azotea is ideal for group parties fills an accommodation niche for as little as Euro 18 per person. Also, there are double-bed rooms for Euro 44 which could vary depending on seasons.  I could look inside the small room with six wooden bunk beds when I passed it in the street. I would not recommend to sleep there in Midsummer, unless there's air cooling inside. The photo below shows you how low windows are placed on the ground floor which is the case with the hostel. 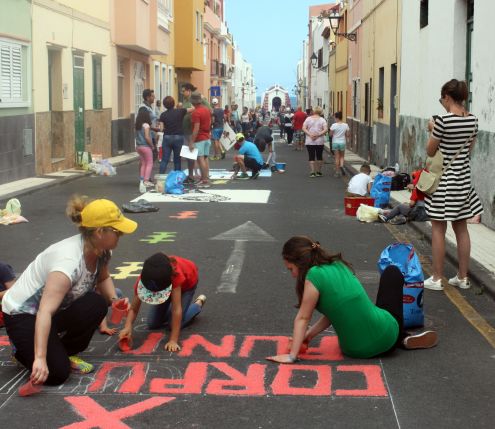 Many get down to their knees to decorate one of the suburb's main streets during Corpus Christi.  This road connects their beloved church Santa Rita built by the late Padre Antonio with a very special chapel of the Cruz by Calle Pelinor.

The Punta Brava residents are also in total agreement when their interests, such as safety are at stake. 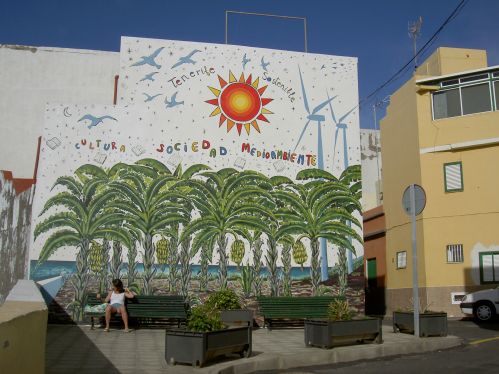 Environmental awareness represented by a gigantesque mural between the streets Pelinor and Calle Tegueste that was first to display ecological street art on walls in Puerto de la Cruz.

Mind a Green Party has been in town since 1983. 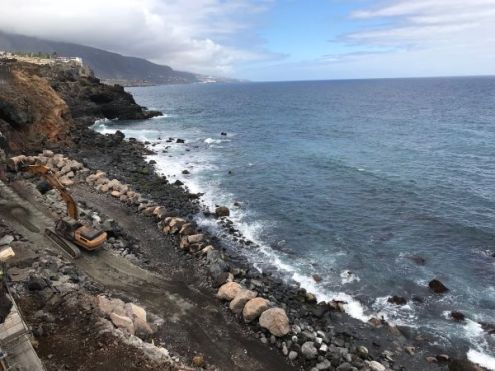 It is good when workers and machines shore up hollowed out caves. That's repairs. However, it is much more important to prevent  new damage.  By the looks of it this was happening when I took the photo.

That's why an earth moving machine and crane were busy to create a breakwater a Dique in Spanish. The security guard at the site whom I asked some questions called it like that.

As said above, all was a great success by middle of November 2018 while more works would go on. I shall keep you posted.

Do you want to see some real stunning photos of this Brave Point outside the beaten track of Puerto de la Cruz where even a secret beach features?

From Punta Brava back to Puerto de la Cruz

where the fishing hamlet at Brave Point is just a tiny part.