Tenerife weather El Bravo are both awe inspiring and beautiful, as i can see again and again near my home on Punta Brava of Puerto de la Cruz. 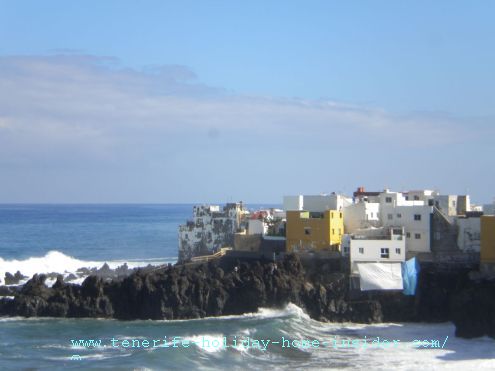 Tenerife weather El Bravo effect on Punta Brava by Puerto de la Cruz, as seen by the tall, grey and white building that's devastated by recurring rogue waves. Click on the photo to discover how the ocean can undermine rocks and buildings there.

Here, it must be said that El Bravo of November 2018 didn't leave the slightest traces on this year's costly stabilizing works to the cliffs of Punta Brave. A big applause is due to the authorities which has done so much good for Puerto de la Cruz in those last years. 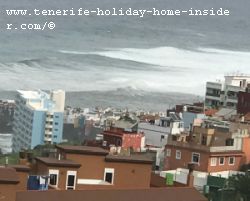 Exceptional Punta Brava waves Whatsapp photo seen from Toscal Longuera which is about 10 min. away by car and sent around November 17, 2018

A few days ago by middle of November 2018, Facebook friends approached me rather worried about the Tenerife recent waves they saw in the Media. They asked if I was in danger.

It's important to know in this context that I had tried to shoot a video of exceptional Punta Brava waves I spotted from my balcony of Los Realejos on November 17, 2018 to no avail.

They were too far away. 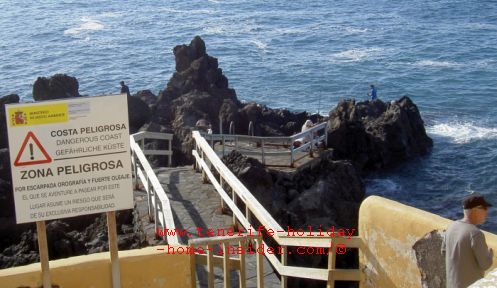 It must be noticed that local fishermen don't worry too much about such signs. Of course, they can see danger coming much better than a foreigner. 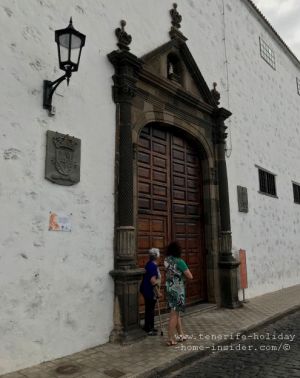 Calle Esteban de Ponte with Garachico convent portal of Franciscan Concepcionista nuns. Click the photo to find out more about this Monastery which was spared the Trevejo volcanic eruption of 1706

This portal  is said to have been pushed in by a monster wave the so called Furia del Mar (rage of the ocean) that flooded its chapel where three nuns drowned, if I remember well.

However,  most of this legendary Monastery the only surviving one of several of Garachico was only destroyed by fire,  a year later in 1857.

Maybe the antique hinges of the massive wooden Portal in Calle Estéban de Ponte were almost rusted through from corrosion, contrary to November 2018 . 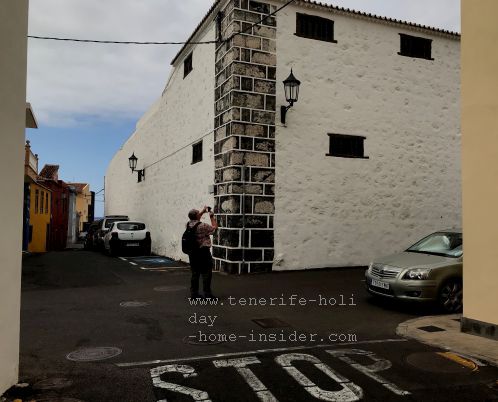 Calle Diego at the rear side of the Garachico convent with a car in the photo. There, the entire building front seems to go on forever.

Otherwise, there may be a reason why only the big soccer stadium of Garachico is between the convent and the Atlantic sea now.

1826, November 07  the worst day of the Tenerife Aluvion (deluge) of that year :  A rogue wave reclaimed the Black Madonna statue the pride and Patroness of the Canary Islands, Candelaria and Tenerife for the ocean from the Cave Archbinico

Around November 18, 2018: Calle Esteban de Ponte Garachico which remains a trouble spot that is favored by Tenerife weather El Bravo. Then, its monster wave or waves  are  in many videos of the Media worldwide together with others from Punta de Hidalgo and Tacoronte Mesa del Mar. 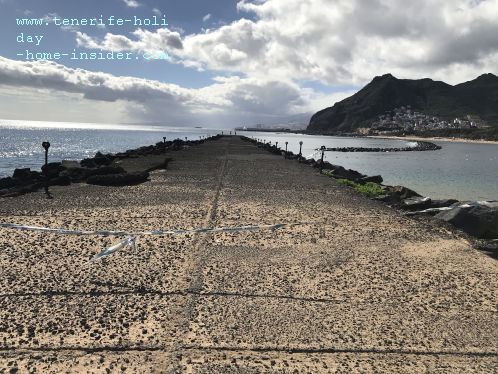 Playa Teresitas breakwater one of three that were important for a safe beach of the capital. Note that it's been or was cordoned off. This spot is officially part of Tenerife South.

I went there on Monday November 19 a day when the weather forecast made me take a chance. I also wanted to see how the San Andres village nearby had fared with its new breakwaters which for a change seemed to have been safe from its dreaded Oleaje fatal (fatal waves) of the  merciless ocean after hundreds of years of big trouble.

A recent  Costa Adeje incident was in local newspapers.  But most lives were lost in South Tenerife by people who took chances on cliffs to admire the wild and wonderful. A rogue wave can come out of the blue.  A few years ago, a Punta Brava fisherman was washed off at shore and drowned in the sea.
The same keeps on happening with ocean currents, as I witnessed here. People should respect the red flags and no-trespassing signs always. When there aren't any like on Playa Bollullu of Orotava beaches don't enter such waters is all that I say by more than frightening experience.

El Bravo the king of rogue waves and a meteorological phenomena isn't only a used term in Spanish speaking countries. Why? Nowadays, even Navy personal, captains of oil ships, container vessels, cruizers, ferries, yachts, as well as active fishermen all over the world are in awe of it.

You can surf a very dangerous wave,  but listen to this warning

From Tenerife weather El Bravo back to its weather in general