Tenerife news about a Tenerife beach, such as Playa Jardin on October 22, of 2016 are not rare. 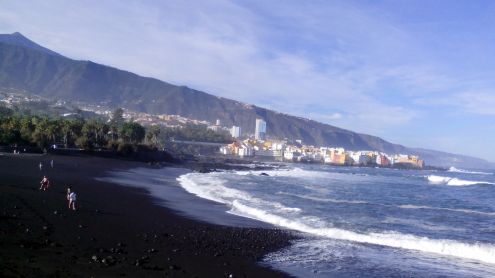 Sometimes, reckless tourists are the reason for such headlines.

However, one of the men who critically endangered himself was a cleaner. The lady in charge of the shower rooms by the beach bar said so.
She told the Tenerife holiday home insider that this guy suddenly jumped into the sea like a daredevil. Later we heard that he went to a woman's rescue like two more man before him.

By about 9.30 a.m. , some people watched the sudden distress of all of them almost in wonder.

A real human drama went on.

The woman who was drowning far from shore had been pulled out by a dangerous surface wave.  Perhaps, the others were taken there by another rip current.  High time to call the equivalent of 911 which is 112 in Tenerife to get  all possible help and also a rescue rope... 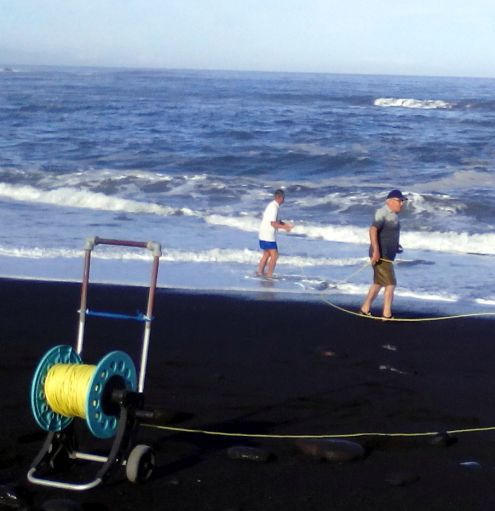 Rescue rope to save people from drowning in the ocean.

Indeed, a rescue rope isn't only used to help a stranded Tenerife whale.  It's for persons in peril on the island as well.

The strong rope is taken out to sea in the photo above by two man. It's not clear if they came from the 112 emergency unit or from the nearby Red Cross station. Other emergency rescue helpers handled a rope further back from shore, as depicted below. 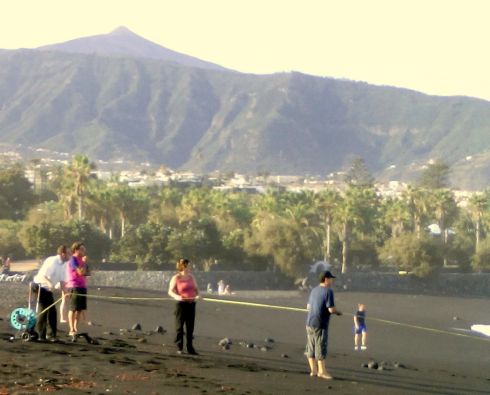 Indeed, the biggest Canary island also has life saving teams on its beaches. However, would anybody man a lookout stand early morning when the Red flag is out?

This human service is important, as at least 11 people died by drowning at sea in Tenerife in 2016. This was the statistic by last summer.

A tall guy who may have been one of the life savers  entered with a small yellow board and tried to get to those in the danger zone. 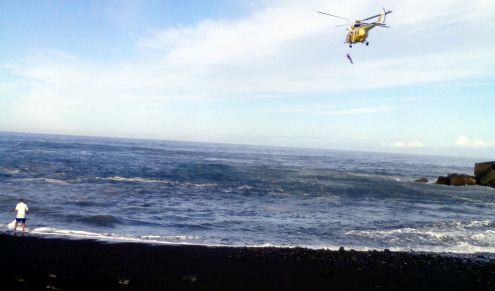 An emergency rescue helicopter started to circle the human drama out at sea.

A paramedic was lowered into the ocean. He took the woman up with him back into the helicopter. An onlooker remarked that this one had started to die of drowning already. So far, it's not known if she was a tourist. She may have to spend quite some time at the HUNSC the main Tenerife hospital. It's the only one that has life saving equipment for critically drowned people.

By the way, there were also Tenerife News of 2016 about highly skilled cardiologists of the same institution here. 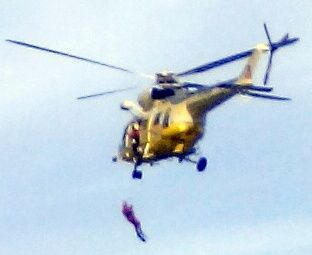 The helicopter rescue went well. At least some positive  news?  Sorry, nobody knew if it could arrive in time from its base at Los Rhodeos, although it seems to almost fly on standby over the Orotava Valley.

By the way, the cellphone which captured the scene wasn't equipped to focus better, unfortunately.

News of a happy ending? 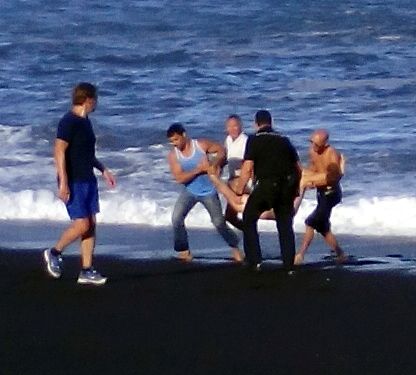 The second attempt of life saving by rope rescue was coming to an end as well.  A limp man was carried out onto shore.

Guardia Civil Police and paramedics were waiting for him. So was the man from the bar who had called for help. 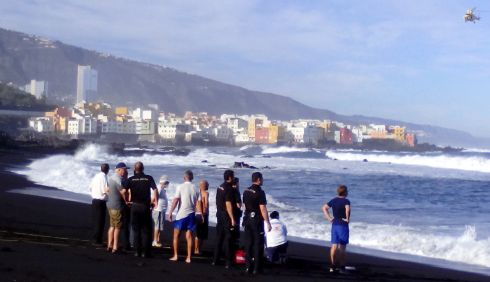 Playa Jardin rescue drama of a drowning in 2016.

Tenerife news about a happy ending of the drowning drama.

In fact, the same bar owner who had had called 112 confirmed the good news a week later. "The woman could be saved. All the heroic men recovered and are back at work", he said.

Who will carry the expenses?

The use of a helicopter isn't cheap. The lady who was saved will have to pay for it. Besides, no insurance covers careless behavior.

The brave young man came back. A red flag was in his hand. He also had to lie down on a pool lounger to receive aid.  It may be assumed that he had also helped to save the life of the portrayed man whose very white skin looked like that of a tourist. The latter was receiving artificial oxygen already. A doctor from the nearby Centro Medico and paramedics seemed to administer it.

Also to be thanked are all the other men who jumped into the dangerous waves to save the drowning woman. 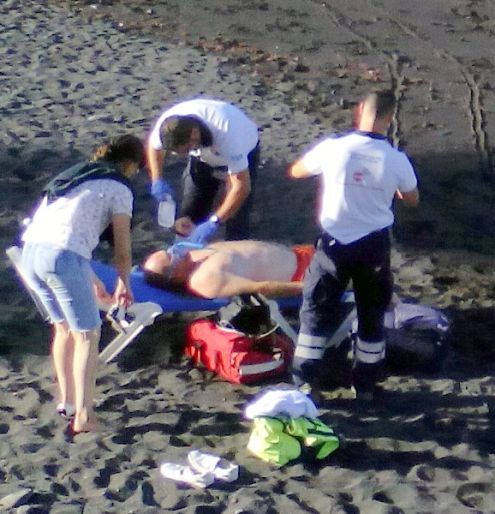 Oxygen given to stop dry drowning.
They are now recovering in hospital, as reported by the Newspaper El Dia in Spanish here.

All that human misery could have been avoided on this lovely, warm autumn day.
Life went on by the Puerto de la Cruz garden beach.

However in the evening, the first autumn rains made their appearance in Tenerife North.

In fact, late autumn is usually the time when El Bravo may take its toll in some spots on the biggest Canary Island where one should never build close to the shores of the Atlantic Sea. In fact, the law in Spain (Ley de la Costa) forbids to construct within 30m from the sea.

From Tenerife news back to Tenerife