Ever heard of serious Spanish graffiti in Tenerife Spain? 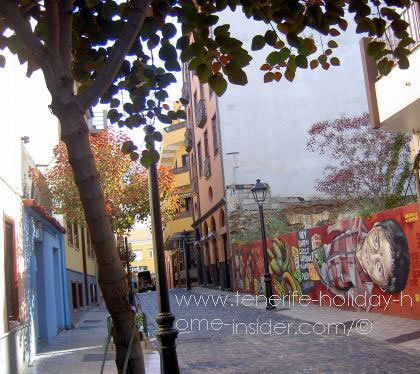 Legal Spanish graffiti
Spanish graffiti always has had a touch of the critical aspect in Puerto de la Cruz. The artistic community of the oldest Tenerife resort looks rather sharply at the town's environment.

Also, it is much concerned about its people.

This time, a broad spectrum of society is the topic. There, even the young may have become victims of ugly Recession business, indeed. 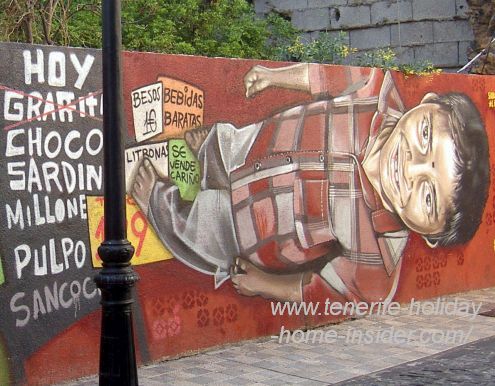 Se vende meaning for sale
By the way, the matter concerns all Spanish provinces, while Tenerife is also part of Spain.

Find this expressive piece of graffiti street art behind the venerable church called 'Nuestra Señora de la Peña Francia' which is almost a cathedral to its town folk.

Note that the photo doesn't depict all the little details of the graffiti with Spanish text, as not to offend sensitive viewers. By the looks of it, the artist tried to say as much as possible in a subtle manner. 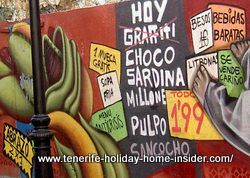 So what's special about this street art?

In fact, the result of the social awareness mural is almost a documentary of a era since 2009.

Credit must be given to the artist

This is the kind of graffiti which justifies its means. It has a message or even more than one. It's highly critical of our society of the Recession in Spain. There, Puerto de la Cruz the town of the gay Tenerife carnival has had a particularly hard time, of lately.

Indeed, it's a very sad type of public painting compared to what is normally decorating back streets or factory walls.

The street art covers a wall which is eight meters long, at least. Different text notes in this mural look almost like price tags and give everything a market theme. They point out different facts which are alarming with people behavior due to bad economic times of much unemployment and hardship.

Spanish graffiti which points to a flaw in society

The craftsman who did this mural in Puerto de la Cruz doesn't condemn and doesn't condone. He is simply an artist whose graffiti is an eye opener of a time sensitive situation. By the way, the portrait of the human figure may even be seen as fine art.

It's amazing how the overall mood of the design with its autumn colors blends in so well with its surroundings. Even all the trees by this cobble stone street enhance the whole composition.

Lets not wander off into the future thinking about tourism in this context. It will go on, of course but, it might more and more resemble that of some far away countries.

Want to see some of the other street art of Puerto de la Cruz where much concern for the environment was pointed out by similar graffiti or murals?

From Spanish graffiti back to Spain art.