Spanish news have Tenerife Anna Rodriguez in the lime light again singing the Blues with Eliseo Lloreda or with band Three and occasional, additional music performers. Note, Anna is a native English as well as Spanish speaker.

Enjoy excellent Jazz with one of most talented Jazz singers and musicians right on your doorstep on the biggest Canary Island of Spain.

Latest news November 2015 I met Ana the other day. She is thrilled to sing at a regular basis at the 5 star resort Hotel Bahia del Duque in Adeje every Thursday. She is also happy to perform together with an absolute great pianist right now.

Anna and her band performed in Madrid the Spanish capital as well as in various places in Tenerife which includes the Auditoriium Adan Martin in the capital where only the best are staged.

To be updated soon.

Listen to the CD at Facebook pages Anna Rodriguez where also encounter more Spanish news of their other concert venues.

Buy the CD at www.cdbababy.com...

Click on Free Abaco Jazz concert ...
This leads to its description on this page.
Band Three and Anna Rodriguez are repeating the jazz performance of 2009 at the same villa.
This time it will take place on Friday July 2010 at 10.30 at night.

Spanish news are that various exciting Latin jazz bands, most of which are influenced by Caribbean Cuban or Brasilian music, will perform at this fairly new jazz club at La Puerta Verde near the Tenerife capital sea front. Note that there is no entrance or membership fee as such... But it is self understanding that the public is expected to consume drinks, at least. Bar or restaurant owners must also survive, you know...

The jazz singer Anna Rodriguez has not confirmed attendance as yet, this time.

Also not to miss is the Jazz Festival Canarias Santa Cruz from July 9 to July 18, 2010.
It is sponsored by Heineken Beer.
Get more details at www.canariasjazz.com.
The band Three which some of you may have heard with Anna Rodriguez will be one of the almost 20 bands. Some of their concerts will be for free. Others may charge a fee. 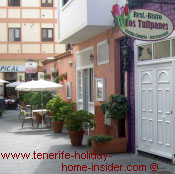 What better Spanish news could there be than live jazz concerts Tenerife in luxury surroundings, such as the former prestige farm Abaco?

Entrance is free, as before, to the best of my knowledge. 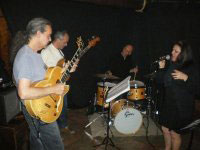 See review with photos of past Abaco jazz concert July 31,2009 with band Three and Anna Rodriguez singing the blues...

By the way, the latest Spanish news are that this Abaco concert will be repeated on the coming August 14 at the occasion of the Festival Innovation Summer in the Sun Tenerife Reunion.

By the way, Pub Gayota is where Halloween music was played during events of disguise celebrations.

Events were confirmed to me by Anna via Facebook with the exception of the Los Realejos concert.

My favorite Jazz music with Anna Rodriguez is when she is singing the Blues with the song called Agua de beber at Tensaba in soft Brazilian Portuguese. By the way, Soft Jazz is something she is also very good at.

The voice of Anna Rodriguez slides you into the era of Jazz Age where Jazz singers like Billy Holiday and Ella Fitzgerald were some of the famous. Experience Anna Rodriguez like a dream but, live in concert...

Anna Rodriguez was featured as Spanish News for Jazz fans by Television Canarias and many other cultural Tenerife and Spanish programs and is one of most known Spanish artists in Tenerife.

Festivals in Tenerife where Tenerife Blues singer Anna will be part of, for sure, have not been confirmed, as yet.

Los Realejos, Santiago del Teide, Arona Las Americas, Puerto de la Cruz and La Laguna are expected to have festival events for Jazz again. By the least, one or the other may be replaced by live concerts or other Jazz music programs.

Jazz concerts on a small scale had started in Arona and los Christianos in May, already. However, not all of the events belong to best Spain Jazz. The main Spanish festivals with top jazz bands Blues and string are to really excite fans on Tenerife from June right into July. Dates and locations of Tenerife jazz concerts are no Spanish news, as yet.
Some will be in southern towns and others in the north, such as San Christobal de la Laguna as well. The Santa Cruz Auditorium will also be one of first to be current with new jazz festivals events for mid summer Tenerife.

May the updated Spanish news for Jazz concerts delight Jazz lovers, who have a holiday home in Tenerife and all others.

Tenerife events with Halloween music steel the show on the last Saturday in October, as not only home parties for all generations but also techno concerts for the young are on the agenda.

Back to HOME to find cheap flights and hotels unless you have a holiday home in Tenerife, already...