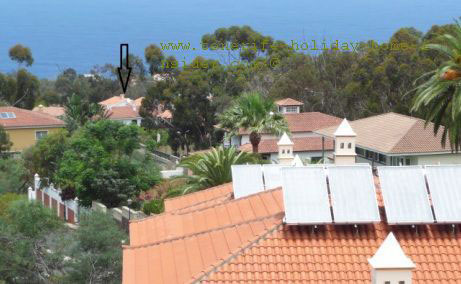 a North Tenerife property, as depicted above. This happened at the end of summer 2012. Lets keep his new home of the north private. It is marked with a black arrow in a distant background. The well groomed neighborhood speaks for itself.

Last incidents which triggered the urge to buy

Guenther's rented apartment had much going for it. Its attached patio had been a blessing. Then came new renters in two of the floors above. One had an African Grey. The bird amused itself by screeching and swearing, almost day and night. Another tenant had a dog which never seemed to stop barking. Not to mention the third party on the last floor. That couple never stopped yelling at each other.

Such Tenerife rental conditions in properties of north and south are not rare, as even modern apartment buildings have patios which are atriums indoors, often. The more narrow and high reaching they are, the more sound travels far.

Buying property in North or South for better privacy?

There is no total guaranty for absolute privacy regarding noise pollution with home ownership. However, you have a much better chance with your own house or apartment. You are also allowed to undertake construction changes to a large extent. Anyway, nobody minds when a dog barks once in a while. Live and let live. Also, it is easier to talk to other home owners than to renters, nowadays. A little diplomacy goes far in this case.

What kind of a person buys Tenerife property?

Few people know the island, as Guenther does. If somebody had more than enough opportunities and time to kill to look around to decide on a location, then it's this German. He had spent winters in and around Puerto de la Cruz as base camp without ever owning North Tenerife property. This was before retirement. He did so as a self employed businessman until some years ago from 1975 onwards. Then he moved permanently to his favorite Canary Island. Several times a year, he travels to his home country. He has investments to take care of and grand children to visit. Indeed, he is on so called semi overseas retirement and wouldn't have it any other way.

Guenther was thinking more seriously about buying property since 2007. He was looking at the option of an apartment on and off. He also was deliberating a South Tenerife property. This interested him in order to spend a whole weekend by Arona or perhaps near Los Gigantes, once in a while.

And now, he's bought himself an apartment at la Quinta which is a new village by Santa Ursula. That was surprising, indeed. He took a la Quinta apartment in a villa with another owner on the first floor... It didn't make any more sense for him to pay Tenerife rental which is usually a loss in the long run. I am sure he bought without a mortgage unless he got terrific conditions. No, I wouldn't ask unless he told me. The other criteria for him would mean to get North Tenerife property at the right price. Guenther is a man who gets what he wants.

It doesn't matter how cheap he bought and what deal he struck. It certainly was worth it. What counts is that he opted again for the north.

Property with land may defeat inflation

There is a lot of talk in German TV about a bleak future. Many want to acquire land in order to plant something. So that may explain the big apartment Guenther got himself now. It is surrounded by orchards and much green. He could even plant vegetables on his veranda. Simply a good investment, you know... It needs to be added that the man just married again. More and better living space is important for a good relationship, you know. By the way, this lady told me that she prefers the north to the south of Tenerife, as well.

Most elderly people from the UK or from anywhere in northern Europe who know the island will tell you that they like the top half of Tenerife Island so much more. Lush green forests, old towns with bygone charm and two degrees Celsius less heat in summer are simply priceless in the long run. Sorry, I know that some can't get it hot enough. Too true... Not to forget is the somehow better health care in the north. Certainly, the disco hungry must go to the south.

Adjusting a property to your own taste

Guenther found himself an architect and a builder to do changes to his North Tenerife property. It will be exciting to see how it will be going. Perhaps, I will keep you posted.

The climate in Tenerife is such a big drawer.

Indeed, it was published in the media that property purchase Spain went up by an impressive 14per cent in the first three months of 2012 compared to the same period in 2011. Most buyers were expats, to the best of my knowledge. Even the British are slowly coming back.

Mind you, some are still watching the up and down of the GBP of 2012 compared to the Euro as well as a somewhat crazy Eurobor which wasn't as low for a long time. Meantime, it remains to wonder if the undecided elderly are losing out on the best part of their life.

Guenther who bought this real estate last not least is a Tenerife insider indeed.

By the way, the sun almost always shines in the region of Santa Ursula where La Quinta is part or, as you can see here.

From North Tenerife property back to real estate in Tenerife jargons, photos and links of related topics.