Imagine the view from an oldie townhouse in La Orotava Tenerife which is similar to the one depicted beside... 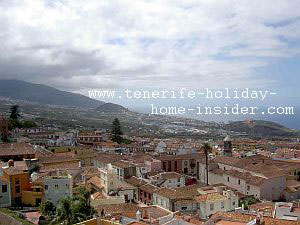 La Orotava is big. In the past, Puerto de la Cruz was the fishing port for this great town on Tenerife Island.

Looking back I call everything I am remembering in this page my Orotava adventure. Would you have that in a normal holiday in Tenerife?

Climbing a steep cobblestone street in La Orotava makes you feel like you've gone back in time which also reminds me Garachico where we went for shopping. You almost see yourself inside a romantic Spitzweg painting.

Tenerife culture as different from the South as day and night

I can't resist mentioning that I saw a similar building like our Orotava oldie in San Juan de la Rambla by the old church, much later. That one was a touch gloomy, however, and much older. It was in a building dating back to the 17th century where the woodworm dust was almost drizzling down from enormous, wooden ceiling beams. Our oldie townhouse of Orotava ,however, was bright and friendly.

A feast for eyes and senses

Our townhouse had amazing inside balconies. However, you very often get even more spectacular Tenerife outside balconies that are striking architectural details, such as this one in the picture below in the north of the island. 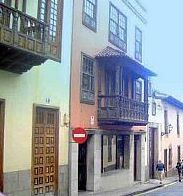 Why an old townhouse in la Orotava Tenerife?

Let me get to the point telling you about one of townhouses in La Orotava that was for sale.

You know, you set it into your head that you would love a modern villa or chalet as
they call it in Tenerife and then, all of a sudden, something so totally different comes up. Am I off point again? Pardon me...

But, the modern places get handled in real estate like young models. You pay for their youth. And for top models you also pay for glamor just like with new luxury
apartments, villas and penthouses in Tenerife.

Of course, the townhouse in La Orotava Tenerife that expected us was a bit more than mature.

The house front, one of many in a row of attached houses, so called casas adosadas, was rather ordinary, but with an longish and classic face. With acceptable handsome features... 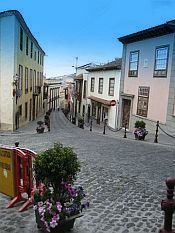 Townhouses not for sale.

Look at a typical row of such
townhouses, as seen in picture beside. Our Orotava property choice was very similar to the houses that
you are seeing. Later, perhaps, I will tell you more
about the elegant la Orotava,
good pictures of which you can also see in the towns' famous event of Corpus Christie which is also the day of famous flower carpet shows.


The heavy wooden front door of the building in la Orotava
was opened for us. Krrr... it went. The hinges needed oiling.

More tiles on the walls... The kind you find around O Porto in the North of Portugal a lot... You know, with white, blue and yellow kind of crane flower wings... I don't remember exactly. Very nice, really antique...

A large indoor patio, blue sky looking in from the top...

An earthen pot with a large, green, fern standing in some corner.

Dark brown unvarnished, wooden balconies all around the first floor...

Our lady friend was wise to leave her high heeled shoes at home. They would not have been perfect for the townhouse in la Orotava Tenerife. They might have gotten stuck in between the cobbles of some Orotava streets. They might not have been ideal for the old wooden steps either.

Here on this photo, a bit of an idea what an indoor-patio of a luxury townhouse in La Orotava may be like. Of course, the one in the picture is the pride of Tenerife, the Casa de los Balcones.

Of course, you will find similar patios, while the most alluring is certainly at the romantic hotel Quinta Roja of Garachico.

Did you know that organized tours take you to Tenerife landmarks like the Casa de los Balcones in La Orotava which is one of the jewels of culture of the biggest Canary Island? 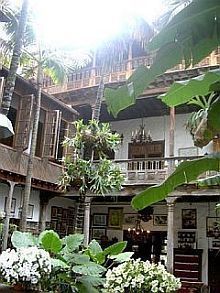 Casa de Los Balcones a townhouse mansion of former very wealthy Orotava people of the past, now a museum, except for its store

More stairs went around a bend to the rooftop of the townhouse in la Orotava Tenerife. We discovered shingles with a bit of moss and some decorative
weed growing on it.

A tiny rooftop was in between, such as are common with Tenerife azoteas or aticos in Tenerife North. It was big enough for a half a dozen people to join for a glass of Champaign. The view over some more Orotava houses was great. Again, most of them were townhouses with more Spanish tiles on top.

The green, fertile Orotava Valley was stretching towards the ocean with its wild and virgin Orotava beaches below awesome rocky walls which remind miniature replicas of Los Gigantes.. 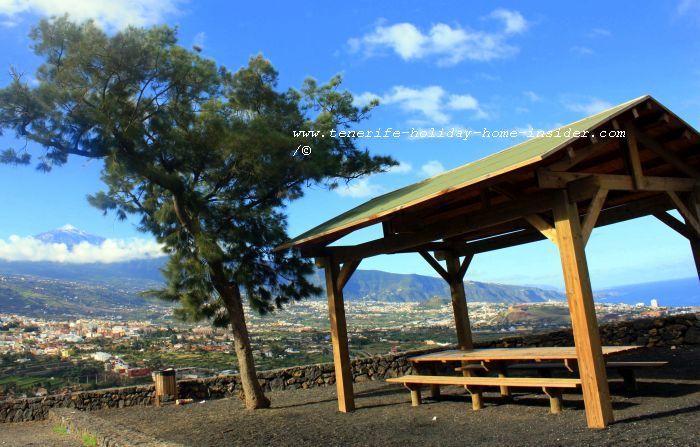 Garden where you would never expect one

"Oh, look a garden, our garden in our townhouse in La Orotava Tenerife!"

"Would it fit a pool, Richard?". "Sure, love, we can do that!", he answered. "You will have
your Tenerife swimming pool!"

My husband would have said: "Perhaps, a bit of a problem!" But, he kept silent. When asked, he replied that one could make a plan.

Our oldie townhouse was great. A circular stone archway was leading around the patio fenced off kitchen, living-rooms and bath rooms. One could see many small windows. 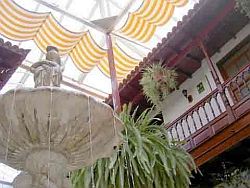 Here, the kind of Tenerife skylight our friends had in mind. It would have been so perfect for the townhouse in La Orotava Tenerife as a patio top.

Should they really buy it as a holiday home?

In fact, the old house was not bad at all. The town house in La Orotava Tenerife had potential to become a very original holiday home in Tenerife, indeed.

The Orotava oldie was charming like only an old lady may be.

Never had our friends dreamed of an oldie townhouse in La Orotava Tenerife. Not as a holiday home, anyway... But, now, they had fallen in love with this gracious, old, lady-like-townhouse.

Be happy against all odds?

Why worry about her wrinkles and her aches in her staircase? Sonia and Richard firmly believed that they could be helped.

A total face lift would rejuvenate the old beauty townhouse in la Orotava Tenerife.
Her rooms would get robed with oak built-in cupboards.

The future kitchen would get revamped with new furniture, gadgets and appliances, fit for the best of kitchens in Tenerife.

The heart of the townhouse in La Orotava Tenerife, the patio in the center, would get a glass-like roof top to protect against weather and sun.

A marble fountain would be placed into the patio of the townhouse in La Orotava.

Canvas, cane and some of the famous, pretty Tenerife cotton lace would be used.

Oh and Sonia knew exactly where to get fantastic little ornaments as well as furniture for her holiday home townhouse in La Orotava
Tenerife.

A shop for nostalgic ornaments

Where? In the shop that caters for the newly wed. The shop in the Casa Lercaro in La Orotava. It was in walking distance from our more modest oldie.

Our townhouse in La Orotava, Tenerife could, of course not measure up with a house like Casa Lercaro.

Casa Lercaro is one of most beautiful and oldest buildings of Tenerife. 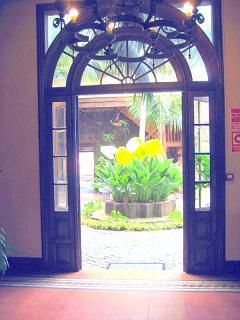 One doesn't have to be an interior decorator to get the right ideas
in a townhouse in la Orotava Tenerife.

By the way, the shop is to the left after you enter through the front
door.

This is now one shop where
where you will think like me
that La Orotava has very good
taste, indeed.

A must to go to in Tenerife

Turn right and take a seat in one of most stunning patios. Indeed, discover, why this is one of best insider places for eating out at any time in Tenerife.

By the way, little did we know then about the outstanding beauty of this same neighborhood at other times
of the year. See most stunning Christmas pictures of the old quarters of La Orotava. They include Casa Lercaro and speak for themselves, absolutely.

An exciting prospect for the future

The holiday home hunt had definitely come to an end for her.

Many a holiday on the biggest Canary island was guarantied for her future.

Oh, and you know, what Richard was so thrilled about?

He had discovered vines growing over a trail at the end of the slightly overgrown garden. Vines were also by the one side of the walled-in townhouse in La Orotava Tenerife property.

Later, Richard made friends with a neighbor who was a wine grower himself. La Orotava wines are among the best in Tenerife. Richard would be happy, very happy in his renovated holiday home in Tenerife townhouse in la Orotava Tenerife..

Of course, there were some "little things" to be dealt with. The townhouse in la Orotava Tenerife needed some repairs. Some new installations and may be even a change of paint here and there were necessary.

Anyway, what counts is that Richard and his practical Spanish wife could organize all important steps for renovations with local artisans in the neighborhood. And everything within a week...

Of course, they would never think of flipping their property nor would they ever consider Tenerife selling of their precious home to be.

They were serious about living on Tenerife Island once retired.

Final documents had to be signed, taxes had to be paid and more had to be done for the townhouse in la Orotava Tenerife.

No mortgage which would have taken up extra time to apply for was needed.

With a big smile, of course... We were all happy.

"I told you, there wouldn't be a problem", was all my husband said. He was right as usual.

It was a clean deal, as well. It had no property strings attached and would would work out an excellent investment to be.

Please, go here to see a photo of typical modern Tenerife townhouses and amazing patios of the kind you may also find in very similar version in La Orotava...

Village house for sale in Orotava

Taking into consideration that it's rare to find an Orotava townhouse, here is one in a village, though. It has 9 bedrooms and it costs about €250000 which is a give away depending on the infrastructure of the property. If interested call the agent whom I don't know by the way.

Return from townhouse in la Orotava Tenerife to holiday in Tenerife...