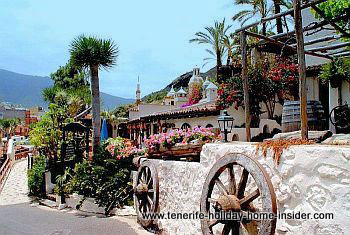 The Monasterio is a term used by expats of Tenerife insiders and is an important must see attraction for Puerto de la Cruz and Tenerife. This comprises the built-up area as well as the Mount Montañeta. The latter offers magnificent views. In 1987, it was declared natural monument as well as protected space for its geological uniqueness. 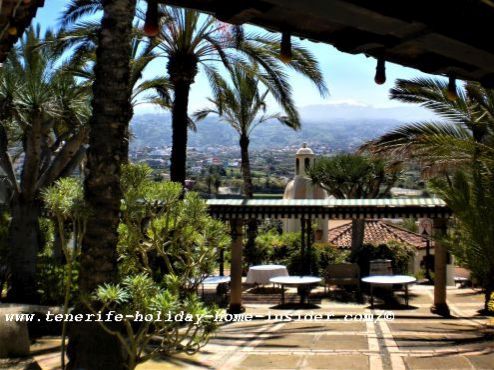 Monasterio with one of many attractive views within its own estate, to mountains, oceans or surrounding villages

This legendary place is often called La Montaneta (little mountain) del Fraile of Los Realejos by the locals.  It takes only two or three minutes by car to get to it from the top of the street Carretera Las Arenas. Besides, the Titsa bus 390 from Puerto Cruz stops by its entrance. 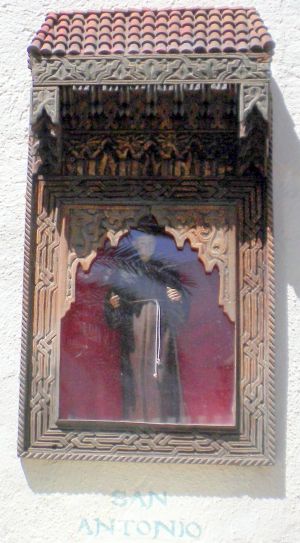 San Antonio shrine as Metaphor for Antonio the Gomeran.

Charming history of the place in a shoe string

Initially, the Monasterio Montañeta was only a large Finca a farmstead with parts that resembled a monastery.

Antonio the Gomeran a shrewd monk founded it, more than two centuries ago.

All lay brothers and other clergy of the region as far as Candelaria knew that he had it constructed in honor of the patroness of the Canary Islands the  Black Madonna.

Humble monks also found refuge there later on , as has been testified here.

This was during the biggest floods ever remembered in post-conquest Tenerife by El Aluvión that was caused by the Hurrican Gonzalez. Then, El Monasterio stood the most remarkable test of times. 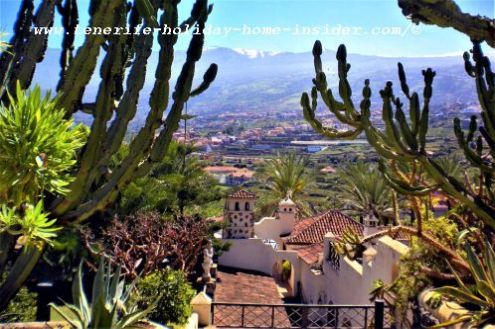 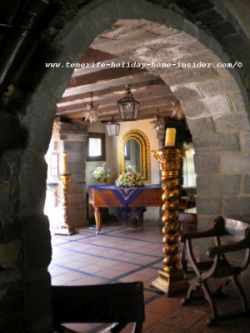 Monasterio with one of its genuine Monastery cellars

This applauded "theme park" of a monastery was inaugurated in 1993.

However, you constantly discover new pieces of art of local culture or craftworks of farm life all over its place.

It was remodeled by an excellent local architect for and on behalf of the Puerto de la Cruz German company called Columbus S.A.. 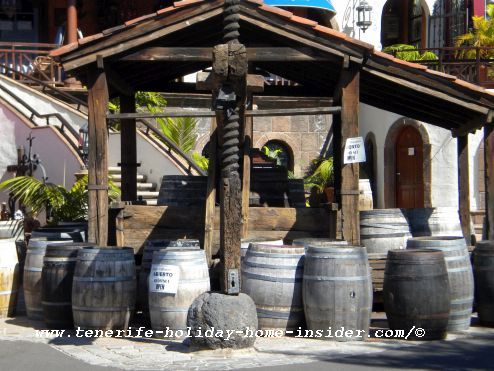 The so called Mesón Monasterio the biggest building by the entrance as well as the legend of the monk gave the park its official name.

Tinerfeños love this and everything around it for family holidays or for afternoon trips on week-ends. Its monstery cellars are also used for functions, such as weddings. 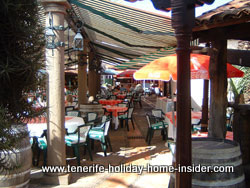 The most alluring part of the called monastery of Realejos is its most charming Medieval section.

However, small children like it most for its gardens with poultry, baby chicken, peacocks, ducks and swans. There, ponies and rabbits are fenced in. Little ponds within this farm park contain gold fish or Koi Carps as well as water tortoises that linger happily on hot summer afternoons. 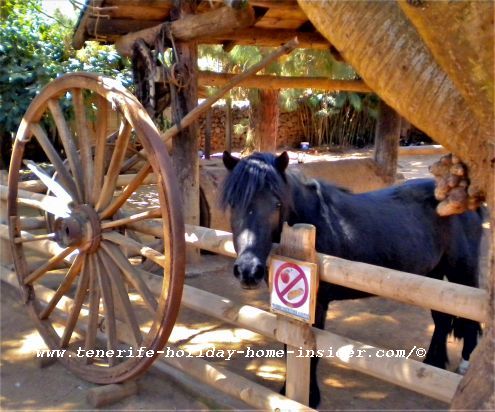 A friendly Monasterio farm animal by an enclosure

Attentive waiters serve my beloved Conejo (rabbit) dish with red Aurotava wine in an oasis of abundant pink Bougainvillea, Geraniums and Ivies in the main patio of the semi shaded Monasterio inner couryard. Colorful tiles on walls and typical rural gadgets in all kinds of nooks add to the delight. Tilandsias that grasp their plant energy from air and sun cling to tall palm trunks. All oozes the blessing of fresh and unpolluted country air.

Several restaurants to take your pick

You find their names sign-posted by the entrance of the estate without any problems to locate them. 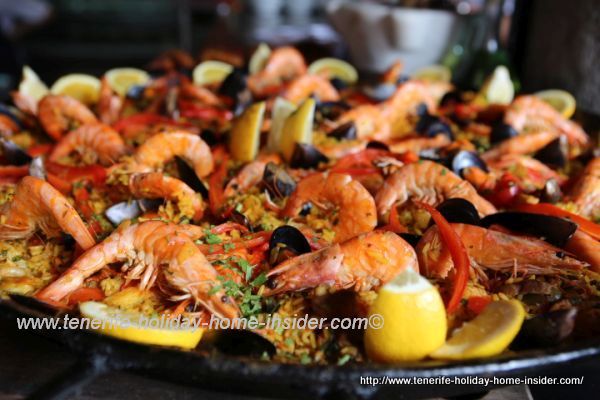 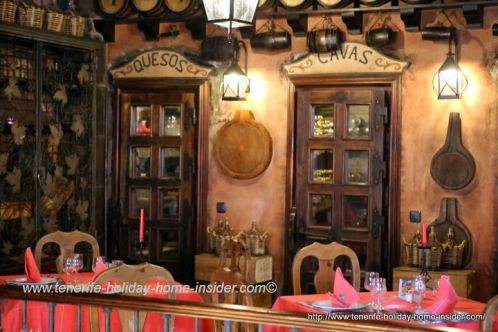 Meson el Monasterio with one of its many restaurant options 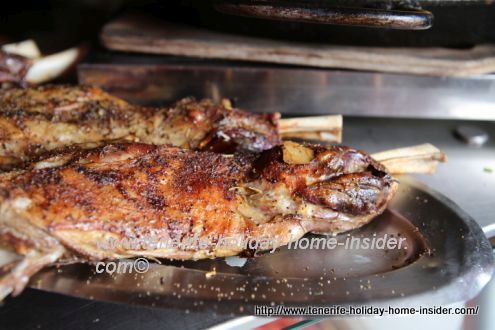 Tenerife eating out at the Monasterio

Eating out there with four large restaurants and several bistros and/or bodegas is a Canary Island treat. 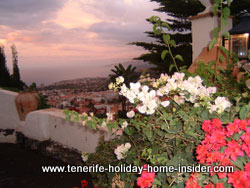 Priceless ocean, mountain and village views off the Montañeta of the monk

Now open to the public since 1993,  this estate of Los Realejos may be enjoyed for great scenic walks  within the Orotava Valley.  The typical Tenerife details in this oasis are Tenerife culture features worthy of museums.

The amount of cars that you often see in its car park which has space for 200 vehicles proves that the Monasterio is not only popular for Tenerife day trips but, also at night. Mind space for more than one tourist coach.

You may do a trip to La Vera's Montañeta any time of the year. 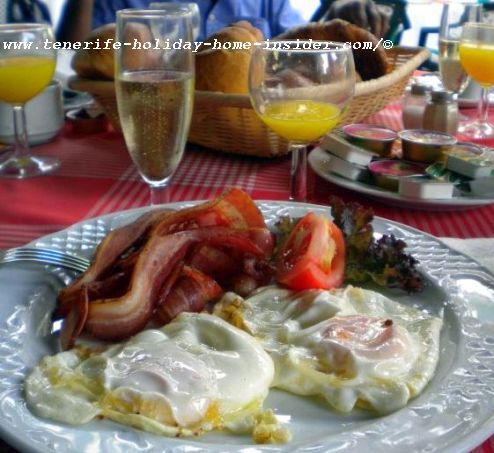 By the way, the main patio restaurant is a good spot to meet friends for Sunday champagne brunches. Last built was Restaurante El Mirador for eating out with views to kill for come rain or shine.

Did you know that the name Mesón represents two restaurants above the San Pedro Monastery Bodega and Lagar by the park entrance?   Mesón which you often see added means huge house and that's exactly what the Montañeta's number 1 eating place looks like. 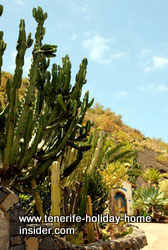 Nature reserve entrance of the Monastery Park of Tenerife

This almost free standing Monasterio estate with its fairly sized volcanic cone was not in danger during the 2007 August wildfires, by the way.
The elevation's with its tiny white chapel the only one on a Tenerife cone can be spotted from far from the TF5 freeway and even from the Mercedes forests. It's a prominent landmark and looks almost like an over-sized Mount of Pueblo Indians of South America. It can be made out from La Orotava and, of course, from many areas in Puerto de la Cruz.  It's just  above the village La Vera and three minutes by driving from the biggest Orotava shopping center by Puerto de la Cruz la Villa Alcampo a mere 15 minute taxi drive from Puerto de la Cruz.

Hotel on top of a mountain

Don't mistake Mount Las Arenas by the TF5 freeway with its hotel Las Aguilas for the Monasterio  hill.

By the way, Spain's highest peak Tenerife mount Teide 'where the little mountain is looking up to', is only about 10 times taller with its 3718 meters or 12199feet.

Coming to think of it,  trips to the Realejos Montañeta are ideal from Tenerife North. They are also easier to plan than excursions to Teide. 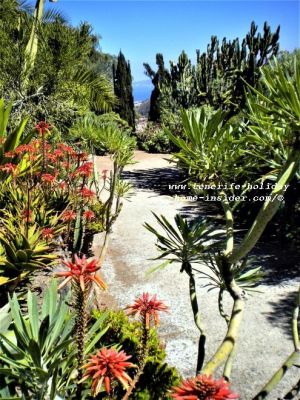 This volcanic cone of 370m height and a surface of 25,7hectares dates back to 1430 when two more nearby cones ( Las Arenas and La Gañania) came into being.  Slag in the form of little Lapilli stones and Basilica was deposited as far as the coast. They also caused the harbor called Puerto de Orotava to shrink by volcanic deposits.

How get to Meson El Monasterio Tenerife?

See Mount Montañeta of the monk as landmark in areal Orotava Valley and Realejos photos, which show how close it is to Puerto de la Cruz.

By the way, it's only 10 minutes by car and even in walking distance from our best Panorama apartment nearby. In that case you take C/ Castillo from La Longuera and turn left into the old Carretera La Vera. You get to La Vera village after a short drive straight on. There, look out for the Monastery sign on your right almost opposite a monumental, yellow road planing vehicle. 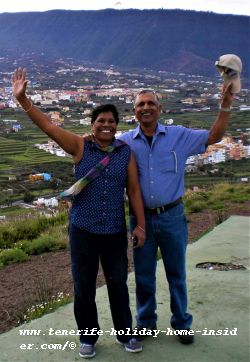 What is up there that so many climb the mountain La Montaneta of the monks nowadays?

For more photos and fun please, see a review of Tenerife walking with two Swedish girls' at and, from the never forgotten monk's place back to Puerto de la Cruz.

Things to do in Tenerife for little children at el Monasterio

From Monasterio back to Tenerife attractions