Tenerife walking at the Monasterio with a personal guide.

Tenerife walking by the famous Monasterio park of the monk is in every tourist brochure today. However, this was not the case in the first decade of this century.

On a Saturday afternoon, two Swedish girls joined the Tenerife holiday home insider for a discovery tour at the park of the legendary monk. 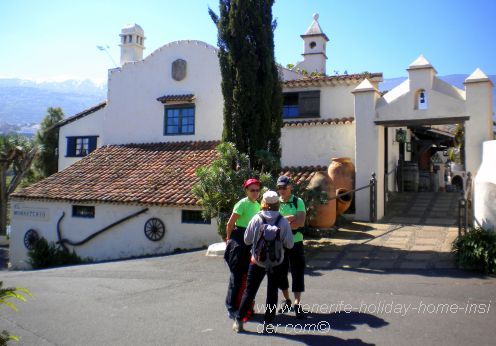 How did they get there?

They caught a taxi from Panoramica Hotel Los Realejos to the Monasterio which takes about 10 minutes. They paid about EU 3,50 or EU 4,00. That was in 2005.

The girls were spell bound, when they got off the cab. They had not expected such a beautiful place. 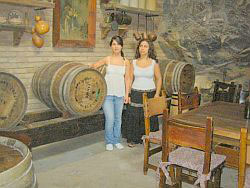 There was the so called most impressive Mesón Monasterio with its wine cellar right at the start.

It's all built in the true Colonial style of Tenerife with thick white-washed walls, much timber and rustic decor.

Two restaurants are above the cellars, one of which for seafood on an upper level that is to be reached by elegant winding stairs from outside.

Would you like to discover more about the Hacienda San Pedro the first Meson Monasterio restaurant at the entrance of the park? 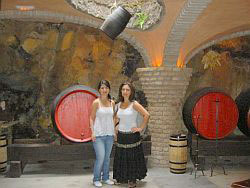 There isn't only a stunning mural by the steps when you descend into the basement that resembles a cave. There, the huge Bodega has more painted wall spaces in between large, solid boulders of rocks. Barrels are placed in between and in front. Tables and chairs fill the rest of the area.

Tenerife walking toward the Nature reserve 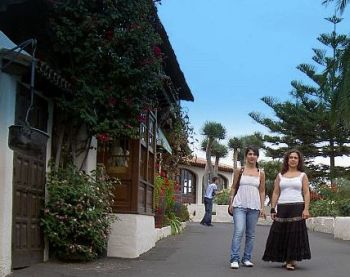 Monasterio restaurants to the left of Sedan and Mary the girls from Sweden.

They continued to get to a picnic spot in the park that can be entered by the top of the tarmac road. There were young Canary pines mingling with Aloes, Agaves, Papyrus, Agapanthus, Yuccas, Olive trees, Bottle brush bushes and much indigenous Tabaiba. 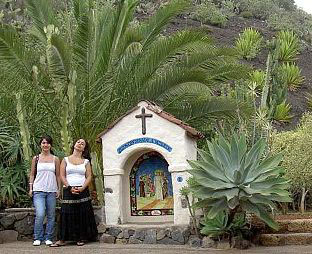 A Tenerife cactus field was behind it. They paused by the wayside at one of the 14 Via Crucis stations of Meson Monasterio on the way to the chapel at the mountain top. Eventually, the tarmac road became a sand path with gravel that leads all the way to the mount Montañeta's top.

They saw a chicken. It rested nicely cushioned by plants under a palm tree.

Some amazingly tiny gray and brown endemic birds were hopping around it and chirped.

Tenerife walking at the Monasterio had come to end now. The girls were hungry. A long wooden table with simple benches under dense shady trees invited for the break.

Drinking water dripped from a fountain on the side.

Later, they entered a small gate and stepped down some stairs into a rather rural corner of the Monasterio farm grounds. There, they spotted ducks. They were swimming in channels which divided the grounds in an almost symmetrical grid. Chicken and their young were everywhere in this orchard with fat green lawns. Funny rabbits were hopping about.

They could hear a donkey and saw a pony, peacocks and more poultry in an enclosure.

An orchard for the senses.

They strolled under low hanging Lemons and Guavas. Also Fig and Avocado trees had young fruit. Everything smelled so good. They marched on cobble stone pathways where one could have tripped easily. Gold fish were in one pond and swans swam in another. They ascended stone stairs  onto an Azotea a Spanish roof top. So far, walkways on this day brought many memorable impressions.

A rooftop with views.

The roof top offered lovely views of la Vera and other areas that belong to the large region of la Orotava which is a dream for Tenerife walking.

They crossed the inside patio behind Casa de Rocio with its round wooden tables. Checkered red and white table cloth covered them. Eventually speedy waiters would serve Paella or Conejo en Salmorejo to the guests.  Yummy cakes and cold meats are also available as snacks. This indoor yard is an oasis of subtropical splendor with Tilandsia airplants clinging to palm trees. Geraniums are in earthen ware pots and Bougainvilleas are growing over a fence. Also ferns abound. 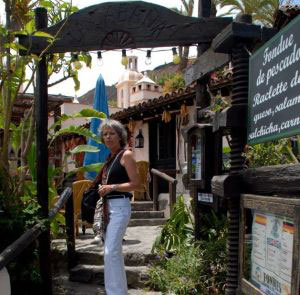 The girls absolutely wanted to take a photo of the Tenerife Holiday home insider by the steps which lead to a Monasterio Fondue Restaurant.

More ahead to marvel at on our way home.

Then, they descended from Mesón Monasterio via Carretera Las Arenas to Puerto de la Cruz after crossing the TF5 freeway.  Halfway down that road they turned right into Taoro Park, information and photos of which encounter here.

This relaxing beautiful oasis always lifts the spirits which made them enjoy the rest of the journey.

It took two hours on foot to reach Puerto de la Cruz from Monasterio Park. They caught a bus in Puerto to return to the hotel.

Want to know more about walking on the biggest Canary Island?

The main article Monasterio above also links to an extensive nature walk with many photos of La Montañeta de los frailes. Portrayed are the man made park and the  many endemic plants of the volcanic cone with its breath taking panoramic views.

Back up to top?
Tweet
[?]Subscribe To This Site
Please support our sponsors...
Transfer wanted
in Europe?