Surprises by a trip to La Baranda Tenerife with a missed Casa del Vino. 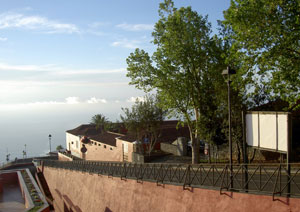 We did a trip to La Baranda Tenerife to visit Casa del Vino but landed at the Cafeteria La Baranda instead.

This was on some Sunday afternoon in July, some time ago.

Hundreds of cars were parked near a fairly large building and we never doubted that we entered the right place to the museum.

However, when we were inside this house we were rewarded with most stunning views towards Teide off Baranda on the horizon. The deep blue Atlantic spread out on the right. There, the island La Palma can be seen during special sunsets. 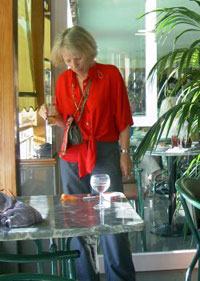 We found a cozy spot to sit which was outside the main hall with the bar.

Indeed, this is me the author of this article which is depicted beside.

By the way, it was hard to believe that we were gazing from our viewpoint at tiny houses from only a height of 300 meters above the sea.

A bands started to play live music and many people most of whom seemed to be locals were starting to dance. Indeed, this looked like a very popular very big dance café of el Sauzal.

The wine museum down the road

Later we discovered the wine museum Casa del Vino or House of Wines. It was virtually next door, just down the road. For some strange reason, we had missed out on wine tasting, as its doors were closed. So was its honey museum and renown restaurant which all is in a lovingly restored old farmstead.

We had to come back another time but then, we would call La Baranda the museum of wines at 922 572535, as not to lose out again.

Now in 2014, Casa del Vino is open on Sunday afternoons until 7 p.m., but closed in the mornings.

Looking back at this outing, I remember more than the sight of the best Tenerife wine museum, more about which learn from the topic of trips on Tenerife.

Why use a taxi to explore all of la Baranda?

Otherwise, mind that lower areas of La Baranda of El Sauzal like so many a coastal settlement on the biggest of all Canary Islands feel a bit like a labyrinth of roads which serpentine all over slopes by the coast. Definitely, it's recommended to take a taxi instead.

From La Baranda Tenerife back to Tenerife El Sauzal.