How Tenerife transfer from airports works with or without shuttle services.

Perhaps, you don't just want Tenerife transfer information but, want to see what prices are charged for transferring from and to the airports of Tenerife. Hope this helps...

My first experience with a transfer by an airport shuttle was during my first holiday on Tenerife in 1997.

A big airport Transfer coach bus at Reina Sofia TFS in the south waited for us, although, our plane with LTU from Duesseldorf was delayed. Want to know more about both Tenerife airports ? Then, please click here...

There was a big bus luggage department to be reached from outside the vehicle. Inside the coach, our hand luggage above our seats was easy to get to.

The driver of our transfer coach had a list of all passengers, who were booked for it. When all were on board, off we went. The adventure of an unknown island could start. For us, at least...

Our airport transfer in Spain on the biggest of all Canary Islands had been arranged for shuttle services beforehand. Destination was Puerto de la Cruz in the north of the island.

Previous booking for our shared shuttle bus had been done on-line by my brother who was a travel agent.

This was great. We could see so much from this high coach bus.

Tenerife South near the airport 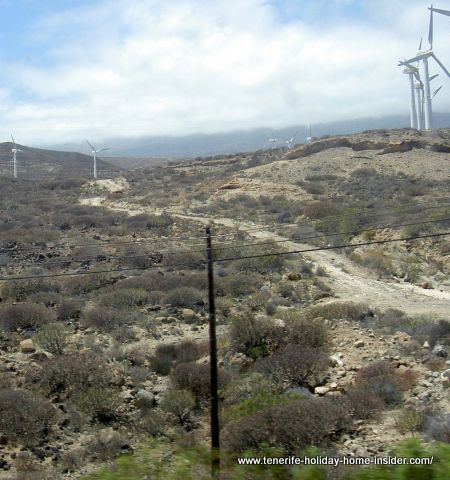 We found ourselves in a totally unexpected Tenerife South when we had hardly left the airport. This was windmill country. Many a cactus and agave grew along the wayside of the TF1 freeway. Indigenous bush land that lacked trees unlike the Savanna came as such a surprise.   This made us wonder what else was ahead. We patiently waited for a greener Tenerife.

Suddenly, the coach was leaving the main freeway TF 1.  It climbed up and down hills to deliver tourists at different hotels and holiday apartment blocks. All buildings looked fairly new. Subtropical landscaping around protrayed a paradise  holiday mood.

We found out that the drops offs were for Playa de las Americas, Los Cristianos and Arona.

A smooth journey along a rocky track

Much later, the transfer proceeded via its main route heading North along the East coast towards the capital  Santa Cruz, on the freeway. Therefor, I know, it was no hotel shuttle bus, but one that had been arranged by an airline. Occasionally there was a settlement with rather big square buildings that spread out by a deep blue sea.

So we had our first impressions of the Southern resorts
thanks to shared service..

You may guess that this stretch of the Tenerife transfer by shuttle took a rather long time along seemingly never ending arid rockeries.

Eventually, we left the easterly volcanic outcrops of Mount Teide, behind and turned left.

Along the outskirts of two cities

We by-passed the capital. Industrial and commercial constructions in rather low buildings with big Spanish words written on them could be spotted. Then, we headed  down the island on the TF5 in westerly direction towards Puerto de la Cruz.
We saw a little of La Laguna, the 2nd biggest and oldest town of Tenerife. However, you don't see any of the historic part of the town but only boring apartment blocks.

Usually, the time needed by a car is 60 to 80 minutes from Reina Sofia to Puerto Cruz for about 100 km. Looking back I am under the impression to have traveled on this Tenerife transfer by road for at least 3 hours. This included time of waiting for all tourists to settle in the bus as well. Dropping them off until they pulled suitcases out of the bus cargo hold delays as well.

A total change of scenery

Soon, our shuttle took us to another world.  Vineyards, trees and fertile farm lands were now on the Tenerife transfer agenda. We passed outskirts of the towns Tacoronte, El Sauzal, Santa Ursula and la Victoria.

The skyline of Puerto de la Cruz by the sea followed suite The moment you arrive there, although, not even on the coastal road, you gasp in wonder about so much incredible beauty.

Our bus adventure trip from the south airport to the oldest resort Puerto Cruz came to an end. After all, it was a never to forget, comfortable journey, indeed..

The same applies to transfers from airports by taxis.

Of course, taxi transfer helps you arrive at your destination much faster. No need to share with others who must be dropped off...

But then, you could only see half as much, as you see from a big airport shuttle bus.

Refreshments were not served on our transfer tour at that time.

In the good old days, you didn't miss that. Why? In those days airlines spoiled you with food and drink during flights.

We only arrived in Puerto Cruz by our 4 star Hotel Valle Mar late in the afternoon.

Book cheap good transfer to many destinations on the island or back to your flight by a link on the bottom of the page.

Read this incredible story about somebody who neglected to arrange for Tenerife transfer airport taxis on-line when an Internet romance was tarnished as a result of it.

From Tenerife transfer to getting to Tenerife.