Incredible story about an Internet romance and one of Tenerife airport taxis. Find safest solution for airport transfer...

However, exceptions confirm the rule.

Is it wise to neglect booking Tenerife airport transfer for a taxi from the airport, beforehand? 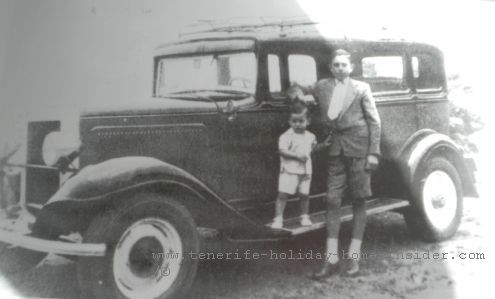 Tenerife taxi by Luciano Dévora one of the first taxi drivers on the island. Don Luciano isn't in the picture.

Mind this surely wasn't the case with olden days' taxis driven by Luciano or Dámaso of one of first taxi stations by Andres Toste in Realejos.

Listen to this exceptional, incredible incident with one of Tenerife airport taxis...

On Easter 2006, a young chap from Gran Canaria arrived on Tenerife north airport.

He was an Internet love of my friend Blanca from Villa Real Spain who stayed with me at my holiday home in Tenerife to meet up with him.

A home-cooked 5 course meal was on stand-by.

My friend and the guy had been sharing an Internet Romance for several months.

Now, she was expecting him to arrive with dinner ready. She, finally, asked herself, why he took so long.

She had told him that the taxi wouldn't take more than 30 minutes to get him to our place.

However, Blanca waited 40 minutes until she started wondering about her friend and why he was delayed so much.

She called him on his cellular phone.

Can you believe it? This Spanish speaking guy was taken half way down to Tenerife South when the Internet girlfriend finally started to trace him.

Later, she said: "Gabriela, how can this happen?
This friend of mine sure isn't the brightest of guys!."

I was with Blanca who was all excited. I was invited for dinner as well. I met the guy from Las Palmas of Gran Canaria.

He seemed a bit disturbed.

This was no reason to have taken advantage of him.

Obviously, this behavior of a dishonest taxi driver was not in the Gran Canaria guy's favor to proceed with a romantic relationship.

Incredible, what a bad airport transport service may entail...

There couldn't have been any misunderstanding with the destination, as the destination Los Realejos was given to this particular driver of Tenerife airport taxis. It could only be in the north and never in the south of the island.

My own review about Tenerife airport taxis

Personally, I only, once, had a somewhat negative experience with one of Tenerife airport taxis in over 10 years. I arranged for a taxi directly at Los Rodeos airport. The particular taxi took my son and me to Puerto de la Cruz in 1998. The taxi was driving all over Puerto de la Cruz to get us to our hotel San Felipe opposite Playa Martianez.
I couldn't prove that we were taken for a ride, straight away. Later I discovered that the driver had taken an unnecessary detour, indeed.

After that I only had good experiences with all kinds of taxis in Tenerife.

You get optimum service, reliable prices and save time as well as gray hairs. Avoid standing outside a perhaps windy airport.

Several years ago, you were rarely quoted an exact price for airport taxis to your desired destination, when you inquired at the airport. This has changed for all sorts of reasons. Now, you are given a much better estimate for your taxi ride. But always ask the price beforehand.

There are apps online for your smartphone where you can check on traffic jams. Also, Google can give you an estimate on km for your journey by a cab.

Return from Tenerife airport taxis to Getting to Tenerife...