Alberto Bar with its dog friendly terrace has its surprises. 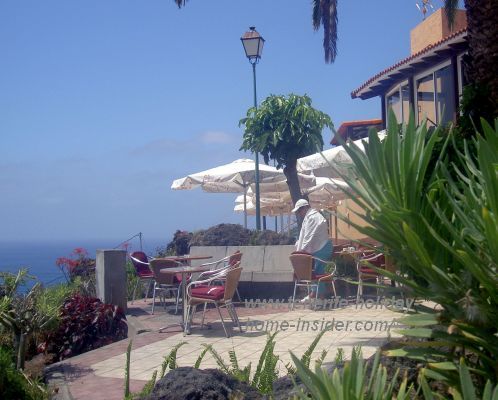 There are breath taking panoramic views over Los Realejos and Puerto de la Cruz, sometimes as far as the light house of Buenavista del Norte. Mount Teide above the green Corona Forestal and paragliders are a common sight. The Isla Bonita  can be spotted by the horizon during spectacular evenings with sunsets behind its landmass. A variety of very pretty succulent plants is another highlight on the lush veranda of this pub on the Taoro hill. 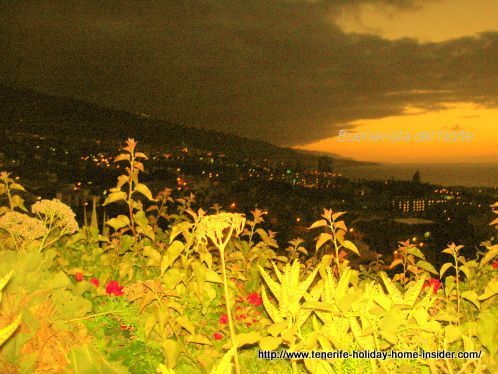 Panoramic views with sunset by Alberto's bar of Parque Taoro.

Also, sundowns with pink,  red or golden stripes over an almost purple Atlantic ocean are quite frequent. The hotel skyline further to the right reminds that you look down onto the oldest Tenerife tourist resort. There, a clear mixture of old quarters and architecture of the 1970ies makes you wonder if town planning existed in the past.

The customers of Bar Alberto.

Many locals of Taoro Park are fans of this bar.  Mind that it seems to be at least sixty years old to judge by some of its framed photos inside the premises.
Tourists are seldom seen at Alberto's. German walking clubs are the exception.

It's so much off the beaten track and hasn't been on maps for a long time.

Insider routes into town from the Alberto Bar.

Two almost secret shortcuts with flights of stairs at both ends of the Esplanade of this rest place for hikers lead down the slopes of the so called Mal Pais to Puerto de la Cruz. The one that's closest to the pub's entrance gets you to Calle Esquillon Bajo. You almost come out at the Mercadillo (Municipal market) when you take the one at the end of the lookout terrace. Both insider routes are not the known way below the former Casino and Hotel of Parque Taoro. 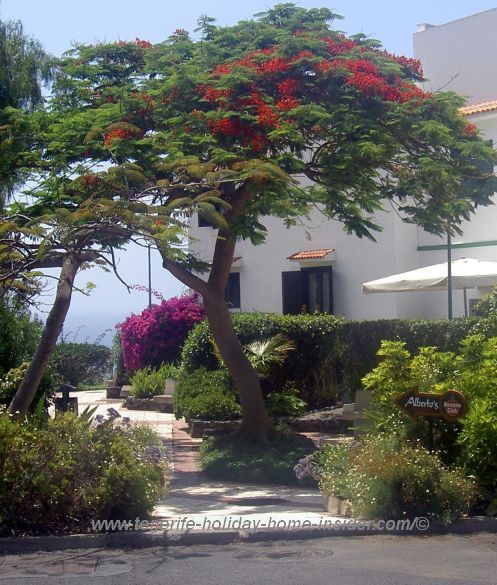 Address of Bar Alberto: Via Malpais, 5 a little one way road which runs parallel to the street of Hotel Tigaiga in Taoro Park of Puerto de la Cruz.

You reach a small park with a pathway. It looks rather private but a pointer on the right in front of shrubs reads Alberto's Havana Club. 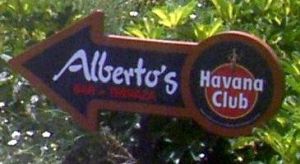 Indeed, its Cuban drinks are of good brands. So are its German beers and the popular local Dorada. Otherwise, the establishment serves coffee, tea, trendy Smoothies and at least one or two Cocktails, as is custom these days.

What to eat at the Taoro Lookout bar?

Alberto has a BARc sign by its door. Hence, it serves small meals besides snacks and German cakes. Perhaps, I was just unlucky with the  Cheese Cake I ordered once, as it was a bit dry. I'll try the Apple Cake next. It's kind of a pie.

Alberto caters for small events on its premises. Just ask if you are interested. Why?

I know this bar from the days of the German Tenerife Cultural Reunion that doesn't exist any more. At some time it had meetings in the bar's upstairs hall. Our assembly wasn't very popular there, as nobody ever ordered a meal, but mainly drinks. 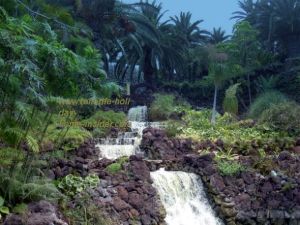 Parque Taoro Park with known walking way back to the hub of Puerto de la Cruz by its waterfalls.

Before the time of our assemblies at Alberto's, I only walked the common stairs like the tourists to get to Taoro Park via the waterfalls shown below.

Klick its photo for more info about its prestige suburb.

How get to Parque Taoro by car ?

From Alberto Bar back to bars in Tenerife

Bars where dogs are allowed inside exist abroad, as seen here