What about the Casa del Agua de Gordejuela?

The Casa del Agua Gordejuela water house project was formed by two units, one of which with chimney. This can be seen by an ancient drawing courtesy of Don Carmelo of La Longuera. The artistic document is signed Longuera Toscal with calligraphy. 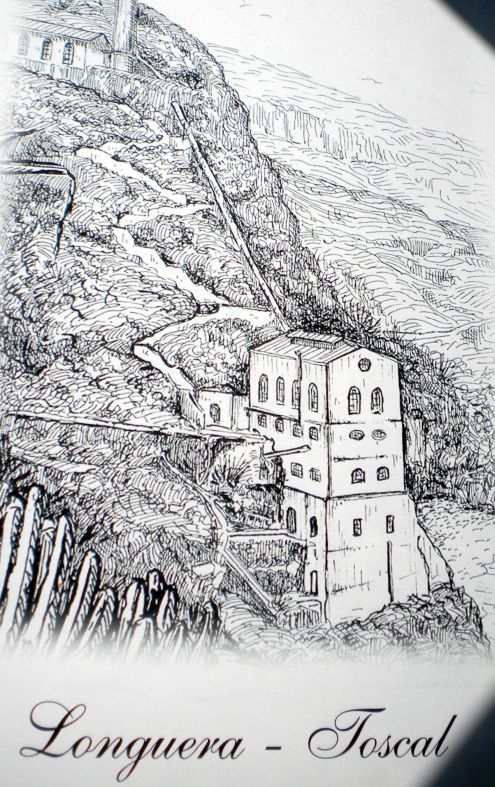 The other proof is a faded photo of 1930,  a copy of which was given to the Tenerife holiday home insider by Don Siverio of the Exmo. Ayuntamiento Town Hall of Los Realejos. It depicts the hill with the Gordejuela water elevator that made the pumps work. Also visible is most of its 50m tall chimney. 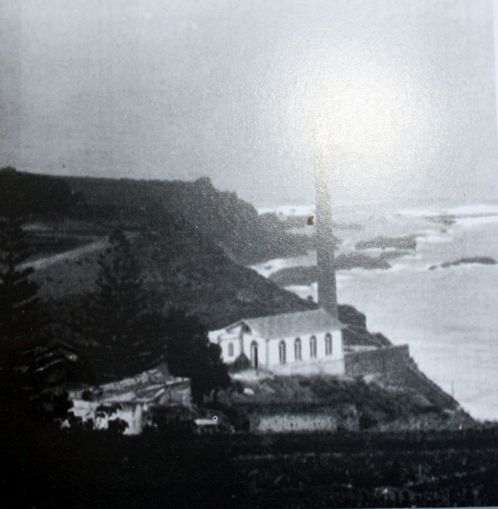 Gordejuela water elevator with its 50m tall chimney in 1930.

However without doubt, the more representative of the two vital parts of the Casa del Agua was in its days one of tallest buildings in Tenerife, as was said by Don Melchor Padilla Professor at the University of la Laguna. 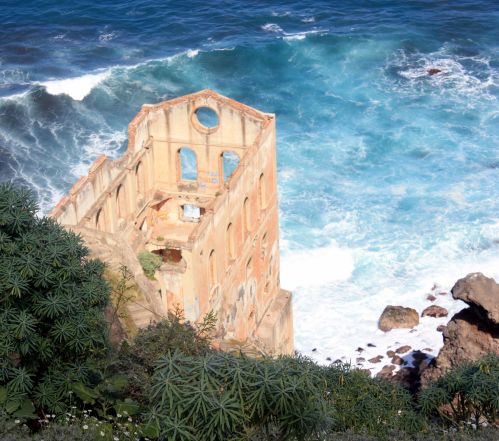 Casa Hamilton at the Gordejuela gorge.

In 2017, its ruin still looks like a Tuscan Villa above the blue sea despite its long lost roof. Never mind the trees and endemic Tabaiba inside that can be seen through  Roman windows without panes. Marvel at the remnants of once sturdy stories, floors and pedestals. Now, moss and ivy climbs its rails, graffiti covers its walls. Fabled giant rats may live in its depths awaiting a bat or a lizard that got lost in the ancient halls.

The amazing Tenerife history of the Casa del Agua.

Water has always been a most precious commodity in Tenerife. That's why the conqueror Adelantado De Lugo started his Hacienda at its very best source. He distributed it from there to its people at a price. However over the centuries, many a dispute arose over it within the  households of Realejos Alto and Bajo.

By the end of the Thirties of the 19th century, much had changed due to new social and inheritance laws, such as the "Desamortizamiento". It was a good moment for the people to start to solve their water problem.

A section of the society founded a share holders company. In fact the first modern water company on the island... Its goal wasn't only to trace new water sources which also included underground mines. The idea was also to find plenty water that allowed to irrigate the orchards. There seemed to be an abundance of it in the gorge Barranco de Gordejuela. But how to get it up caused head aches.

The age of the steam engine. 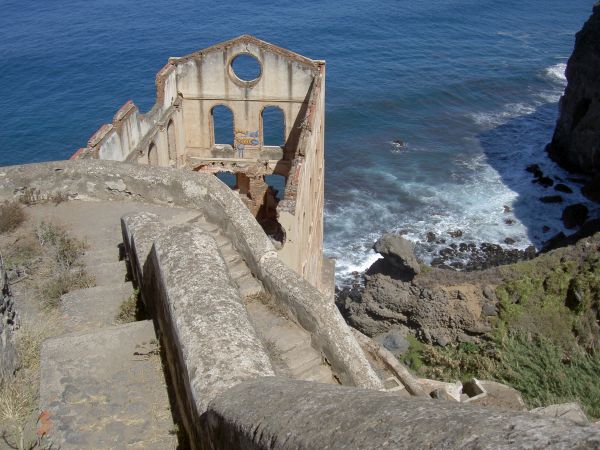 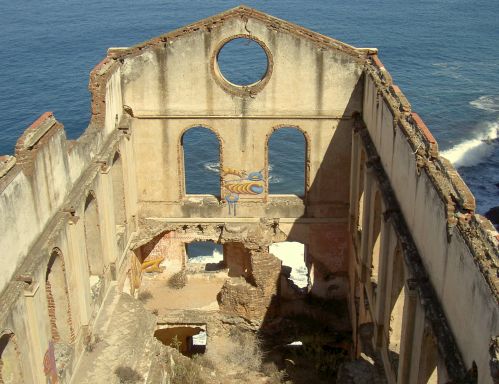 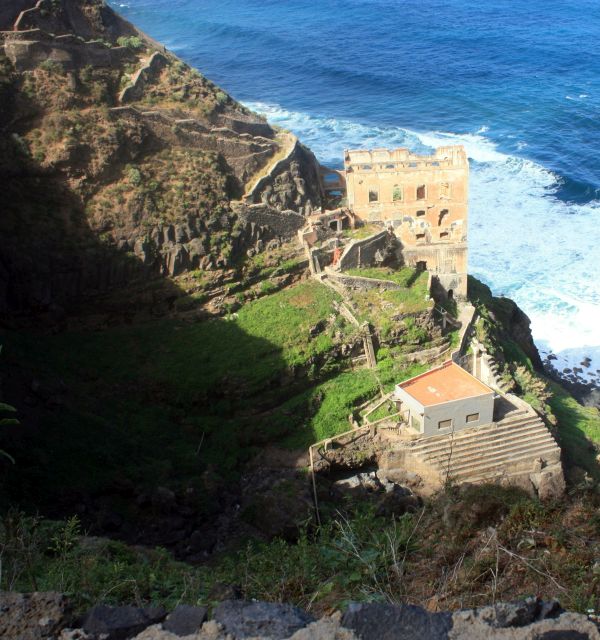 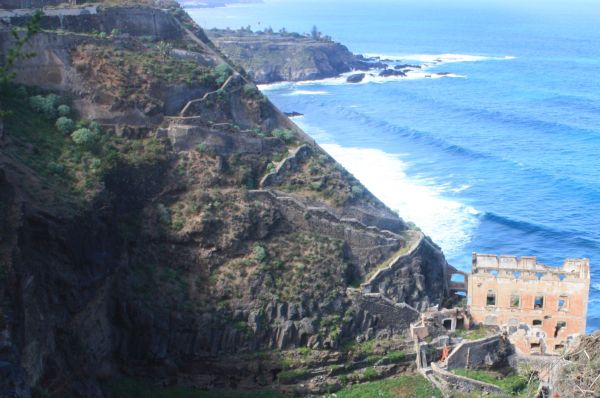 Later in the century banana plantations became new issues. That's when the British house of Hamilton had an idea. Why not build hydraulic pumps that would transport the abundant waters of the Gordejuela springs to the people's orchards and to the Banana plantations on the hills.  In 1846 Hamilton and Co. bought all the 90 shares by the Realejos water company to this effect. All were thrilled with the innovative project.

In 2003, the Gordejuela water elevator with staff and store houses were created and the island's first steam engine came to Los Realejos. The military engineer Galaguer built the units for it and made it all work for and on behalf of Messrs. Hamilton and Co.
The elevator and gigantic steam engines did their job struggling on for 15 years. In 1919, the entire project had to be written off at a loss.  Reason being, stern competition in the banana export could not be beaten by the Gordejuela scheme. The Hamilton and later the same method used by Elders & Fyffes to transport to irrigate worked out to be too expensive.

'The reason was to bring water of the Gordejuela springs to Banana plantations of lower Los Realejos. At the time, the fountains only empowered a nearby flower mill.

From 1903 onward, the engineer in charge of the entire Casa del Agua project was Don José Galvan Callaguer.

The springs were at a height of 50m above sea level. Don José captured them with a channel. It then had to reach the upper floor of a four story house he had built where machinery was installed. There were also staff and store rooms.

The steam machines had to be placed 100m away uphill and with an inclination of 80m to avoid dangerous closeness to machinery in the main house. Steam re-heaters were installed on various levels to make up for the distance. The water was then taken by a pressure pipe over 2km to a reservoir. This tank of 12000 cbm water capacity was at 290m above sea level. 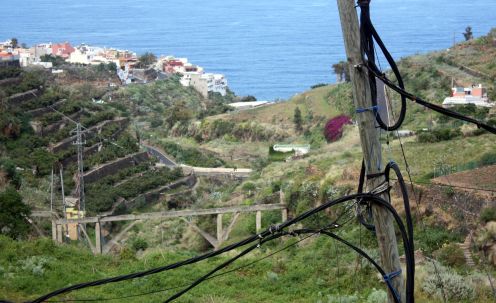 From there, a 12 km long Aquaduct brought irrigation to more fields in the Orotava Valley.

A 12500 long pipe had to transport up to 5000 cbm daily to get water to the reservoir. The agricultural area that was to be irrigated by this method stretched over a very big surface. This made it even more expensive to place the necessary, heavy equipment on the very sloping and often awkward volcanic grounds.'

How the project worked was translated from a Spanish description by Don Carlos Perez Hamilton on Don Melchor's website.

It also shows the size of the pumps and more which find here.

Reason being, is that the project of the Gordejuela irrigation system is most incredible to even imagine. In fact, the pioneering spirit by Messrs.Hamilton of trying to give the people of Realejos water against all odds is more than to be applauded.

From Casa del Agua back to Los Realejos.