Ikea Tenerife is ideal for the holiday home in Tenerife.

It's like an adventure strolling through its colorful lanes.

I know lots of people with holiday homes that go there on a regular basis just for browsing, because there is always something exciting and new to see. 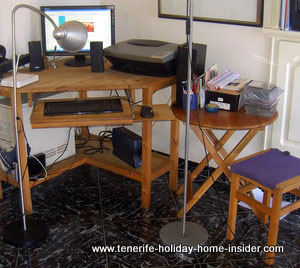 Look at my space saving Ikea Tenerife office corner. Admire the practical, wooden office desk...This Ikea corner desk is a self assemble computer desk, as you can see.

The little round wooden fold-up table comes very handy beside it. It's light and can be used anywhere and for anything in a home. Contrary to the fancy computer table, this round furniture was very cheap. The square stool next to it cost next to nothing and is one of handy Tenerife Ikea products.

Discover the bendable light fitting on the left. This is the only Ikea article that needed some repairs after 8 years. Where would you get guaranty for light fittings for 8 years?  The computer gadgets that you see here are not by Ikea.

Locate this tall, modern floor lamp by Ikea which is normally not next to my PC. The indirect light of this, straight, slender Ikea lamp shines towards the ceiling, which has many advantages.

Ikea of Tenerife Island is also a place to bargain hunt for small cheap home accessories, in particular. This could be a little ornament which represents a small pot plant with artificial chives, you could put on your kitchen sill. It may be a cheap poster, which comes with a frame, it may be an innovative light fitting. Go browse, the surprises are yours to discover... Sales are in midsummer.

By bus you would take Titsa 102 or, better, your own or, rented car.

Getting to Ikea of Tenerife

Ikea Tenerife is on TF5 Freeway at km7,5 exit between Santa Cruz and La Laguna, almost, opposite the big Santa Cruz Hospital on the other side of the Autopista del Norte. You take the exit Las Chumberas when you come by the TF 5 from Tenerife North.

The Commercial Center looks like a village on its own with many super stores.
Ikea Tenerife lets you quickly hop over to the big Decathlon Sports stores or to the Alcampo Supermarket in the other direction. Both stores are only a few steps away. Many boutiques and all sorts of other shops are there, too. 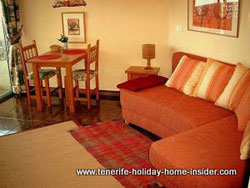 Order your catalogue here by clicking "todo el mundo" on their next page.

Ikea was suggested to us for adding on furniture to our partly furnished holiday home in Tenerife in 1997.

See this apartment at border Longuera and Romantica I. This apartment by Puerto de la Cruz which reach within 5 minutes by car has Ikea ornaments.

Ikea's flair is said to please all tourists on holidays on mount Teide Island.

What else did I buy at Ikea Tenerife?

I bought several ornaments from Ikea besides the things shown above, such as candle holders, place mats, baskets of different kinds, stylish desk plates and even spot lights which I never used and traded with a friend. To be honest, I would need to go to our studio as well to remember all things purchased from Ikea. There is no point to give prices, because it's too long ago. But, I have been happy with all those things right up to now.

Why Ikea Tenerife mounting and delivery services are recommended

It happened that I had parts for a large wardrobe delivered by Ikea. We discovered a badly damaged door when a friend started to install the furniture for me.

Perhaps, there wouldn't have been any problem to have the part replaced without hassles by Ikea, had they mounted it. Anyway, I was lucky that a friend obliged and had it exchanged.

On the other hand, they actually rarely deliver and mount stuff on the same day.

We had kitchen furniture brought to us on a Thursday. The two different men who mounted it only came on a Tuesday, while Ikea had made us believe that they may do the job earlier. The nice part about it is that Ikea calls a day before, eventually. The guys who do the assembling tell you an hour before they come.

Ikea Tenerife deliveries to the North versus transport to the south

Transport to the South is free, while Chayofa by Arona is the magic location. It's not sure for how long this will be so. The guys who mounted our kitchen cupboards were not happy to have to get up in the whee hours of the morning for Tenerife South deliveries. They were not happy with the pay for such hardship. Blame too many unemployed who need work.

Deliveries to the north are rather expensive right now. There may be several reasons for this.

When to employ Ikea expert help?

The Ikea Tenerife one stop shop is the perfect place to furnish an empty home. Experts will come to your place when you don't take measurements yourself. This is often best, as they are also looking out for hidden problems, such as electricity cables, water pipes and more. You need no interior decorator skills whatsoever. Ikea displays furniture and everything which could complement it together in perfect harmony. All you need is picking the theme, you like.

I hope that my personal photos will help you to find wooden Tenerife office furniture to work at home... Not all of us want computer desks of metal or chrome.

Now, you know how and where I work from home thanks to Ikea.

Please, return from Ikea Tenerife to shopping in Tenerife, in general.