What makes the Mirador de San Pedro so unforgettable?

This Mirador de San Pedro in Los Realejos of Tenerife Spain is unbeatable.

Not only the photo below speaks for this.
A camera is one reason to make any outing to it more than memorable. Your pictures will prove it. 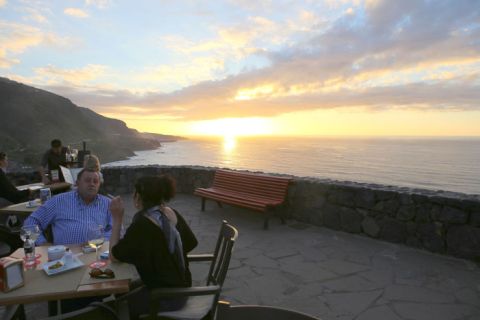 Many locals meet there for dating with a romantic drink in the evening. Others come to enjoy an unforgettable sunset in the ocean over La Palma.

Where is this place and how get there? 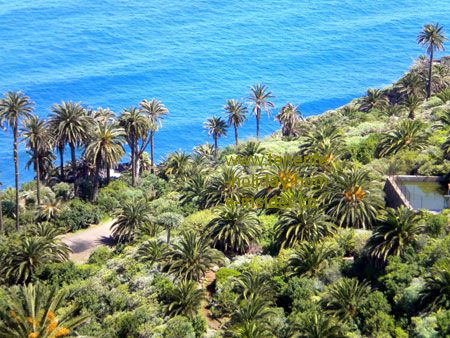 Palm grove by the sea at San Pedro Los Realejos of Tenerife.

Sights reach extremely far to the right over palms via the remnants of the old Fort FortÍn de San Fernando past the ruin La Gordejuela, Hotel Maritím  with Santa Ursula and La Orotava coast on the horizon. 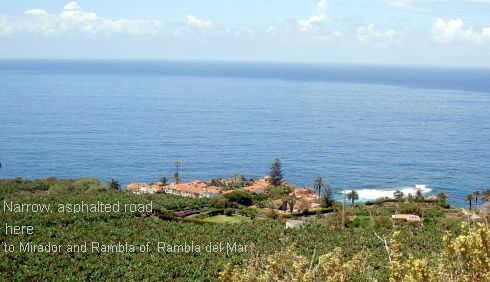 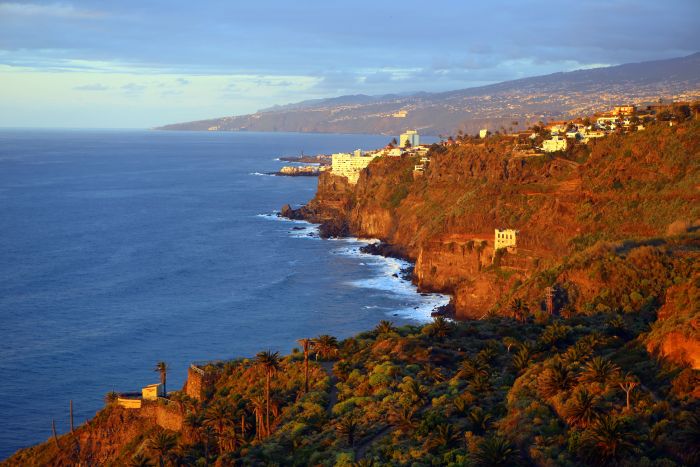 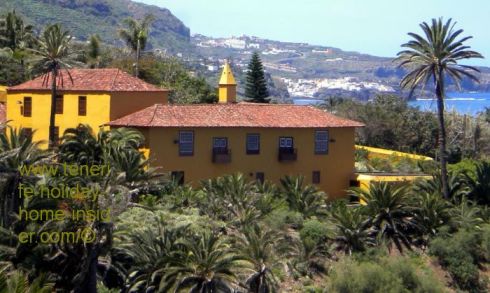 Endemic Tabaibas surround wall to wall banana plants to the left side of the bay. Single Phoenix palms and a Dragon tree are almost landmarks. A cobble stone road to the left of the Mirador of Saint Peter leads you to Rambla del Mar. It's asphalted later on.   This Camino a path  seems to disappear below the walls of the restaurant. 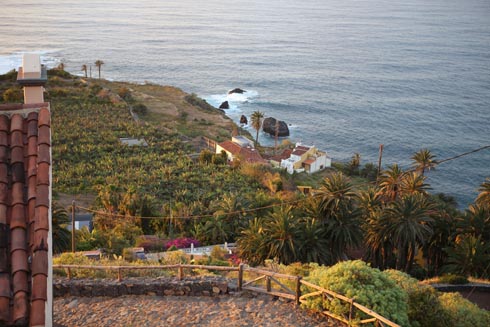 Farms by El Guindaste seen from the viewpoint of San Pedro.

Also make out the rocks of El Guindaste. The fishermen on top can't be seen from so far. You wont spot the guys that take a break there, either. They swim in the pools between El Guindaste ocean rocks. The photo also shows the Camino i.e. the cobble stone path  that leads to Rambla del Mar. That trail is for walking only.

Mind that only the Playa del Socorro TF5 turn-off further ahead will take you by car to Rambla del Mar.

So what about Restaurante San Pedro ? 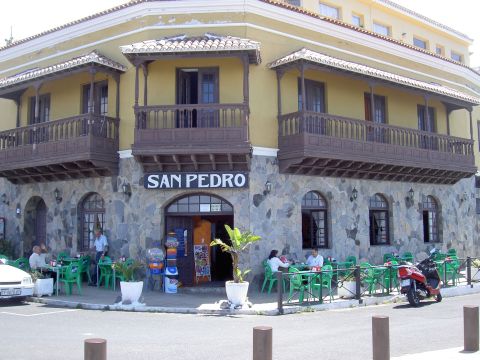 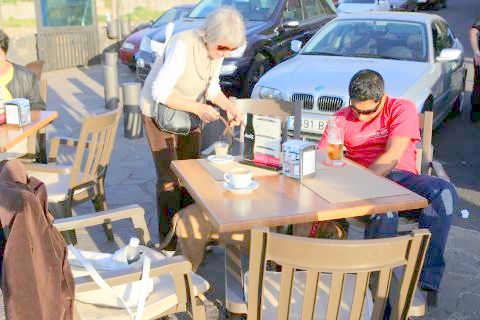 One evening, there were many people at the Mirador. Cars stood even on the restaurant lookout-veranda, as can be seen. Note that our big dog was allowed to park itself under our table.

By the way, you may just have a drink there, such as coffee or a nice Munich sized beer. Both are good.

This restaurant isn't run by the owner Helmut of Hotel Rural San Pedro any more.  It was already under new management in 2014. Now, its interior decoration contrasts with the rustic one of the bar next door.
Now, Helmut runs the Bamboo Bar with small meals. Most have the Southern German Bavarian touch.

A friend and I enjoyed some very welcome salads after a long stroll through the protected space of the Mirador's valley.
Helmut's wife prepared them for a change. 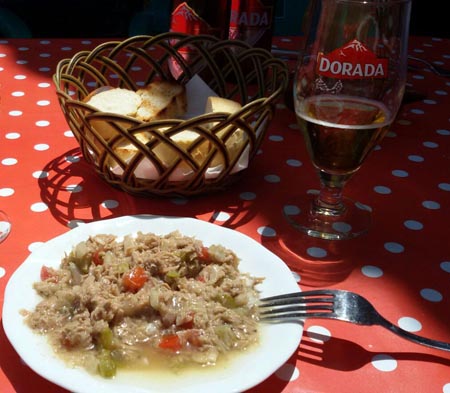 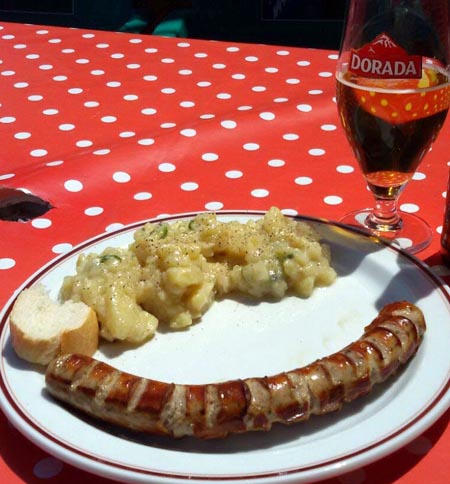 The Bavarian potato salad came with a delicious pork sausage and Mustard.  No Mayonnaise in the salad. Bits of tasty Gurkins, some spices and oil and vinegar gave it taste.

We drenched out thirst with a cool beer.

The fair price of it all drew no alarm bells.

It must have been anything round about €12 or by the utmost €14 all in all, if I remember well.

15 minutes should do when there's no rush hour traffic. Why?  The freeway has only two lanes just before the Mirador. 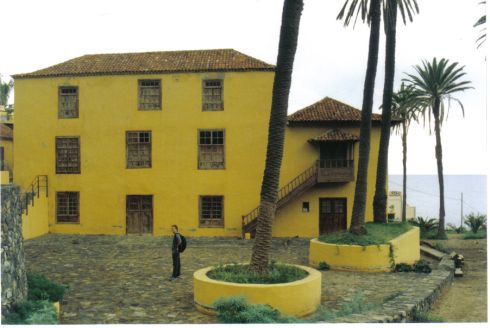 Former Hacienda de Castro until about 2002.

La Casona is  a Mirador de San Pedro on its own, as it's virtually built on the steep cliff above La Playa de Castro beach.

The time of construction  was XVII. Those days were  haunted by pirates. Don de Castro could detect them and other ships from his top floor. Important, as he's said to have been a Portuguese merchant, also.

It's not clear if Fernando de Castro was associated with El Fortin. Three canons are left on that semi ruin near the Hacienda.

La Casona has seen some restoration work which slightly also changed its outside looks.

It has come to a halt for time being for the usual reasons.

The humble chapel was built sometime in the XVII century by Fernando de Castro. Every large rural estate had to have a house to worship Christ since Tenerife had been conquered.

The bell tower and the Saint Peter statue inside seem to be the only church treasures. Its one room has a simple open Mudejar ceiling and also a very basic altar. 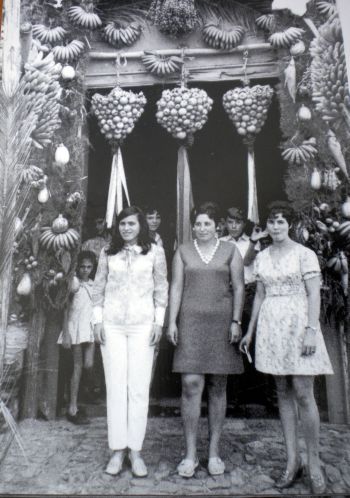 By the end of last century, village folks nearby decided they needed to have a special day for it, namely a Fiesta. Now,  it takes place every June 29.

Then,  all bring fruit and vegetables and decorate the portal of this house of God to celebrate.

Indeed, that turns the Ermita de San Pedro into a colorful and sweet smelling sight to behold. Imagine this decoration with different fruit, bananas, sweet peppers, corn, potatoes, grapes and wine... You name it.

What about the most famous Rambla of Tenerife North?

Yes, that's the Rambla de Castro and it's at its best at the Mirador de San Pedro.

As said, it's an amazing eye opener. After all, it left us quite hungry but,  happy after climbing up again from the bottom of the protected space by the Mirador.

See photos of the Fortin de Fernando and its canons, of the beaches below, of rare flora.

Not to mention all the other parts that connect the Rambla. This also means that you can reach the Mirador of Saint Peter on foot by longer or shorter tracks. Click here to find out all about one of best Ramblas of Spain.

From Mirador de San Pedro back to Los Realejos.