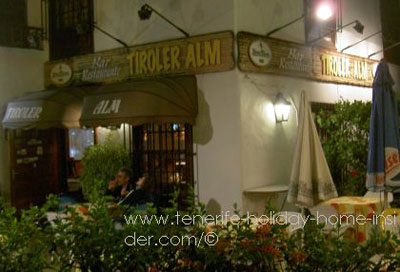 What's really special at the Tirol restaurant are its children menus. They are mere half portions and some of the normal dishes. Hence, ideal options for all who are not very hungry. 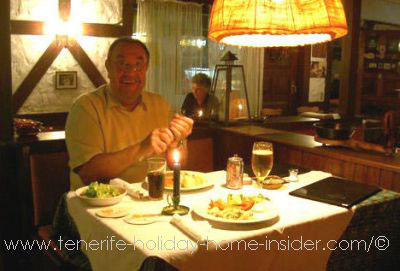 And this Austrian restaurant doesn't break the bank.

You may have noticed the same super light in the first street front photo. There, old fashioned lanterns are placed near the Austrian restaurant's veranda, A hedge with red hibiscus is creating privacy there, 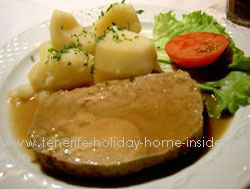 It made him very happy.

Indeed, meat loaf is also a typical dish of the Southern German as well as of the Austrian cuisine.

He selected beer from the barrel which was a good choice.

I took the Alm Schnitzel with potato salad. 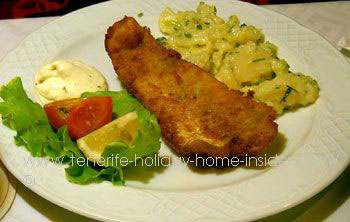 Alm Schnitzel with Potato salad.
I wouldn't prepare meat in this manner at home, but I enjoy it now and then, while I always prefer spicy Asian food. However, lets give the Tiroler restaurant some due credit. This dish which is typical for the region of Vienna was tender inside, delicately seasoned and fried to perfection. My companion as well as i received a tiny bit of mixed salad on the side. By the way, some gourmet restaurants may have a fancy 'Sauce Chasseur' or the like with this dish. That would make it more expensive, though. Also, I only had a children portion, as I wasn't hungry on that day. I even skipped dessert.

However, Guenther with his sweet tonge wouldn't refuse the last course. as Restaurante Tiroler Alm is known for its superb Apfelstrudel. It's the best that you get in North Tenerife and most probably on the whole island.

What's so special about it?

There are two different time consuming ways of preparing this pastry which is ideally served hot, by the way. Virtually, all chefs cheat with this elaborate treat. They serve apple pie or apple cake, instead. It almost looks or tastes, as if done with puff pastry but, it isn't. It's much crunchier.

I was very unhappy that my camera went on strike and I couldn't take a picture of the Strudel. Well, I will have a lunch or supper at the Alm restaurant again and all I hope is that they still have the same cook.

By the way, this La Paz restaurant isn't open at certain times during the year. Also, it displayed the 'Mondays closed' sign when I last passed there in August. However, its wholesome Austrian cuisine should be available during all winter months right up to Easter.

And make sure that they have the famous apple dessert before you go there not too late in the day.

From Restaurante Tiroler Alm back to cheap Tenerife restaurants.