In 2017, the Romeria San Isidro Labrador of Los Realejos took on new dimensions as important Tenerife event of Fiestas de Mayo May celebrations. 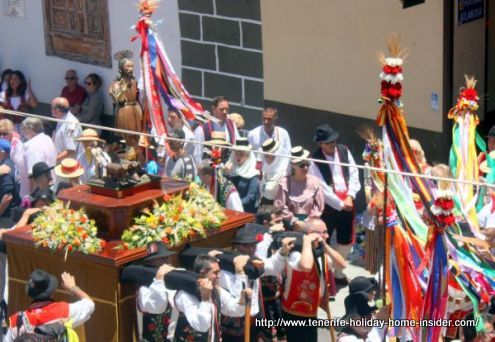 Never before in the last twenty years have that many locals added to the fun clad in their finest traditional dress, as nowadays.

Six Canary Island folk groups are to return to join more than the Romeria street dancing in the future.

The important traditional event takes place on the last Sunday in May in the town's old quarters. 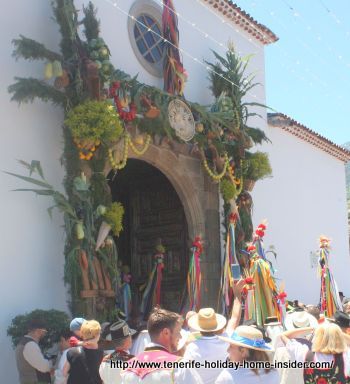 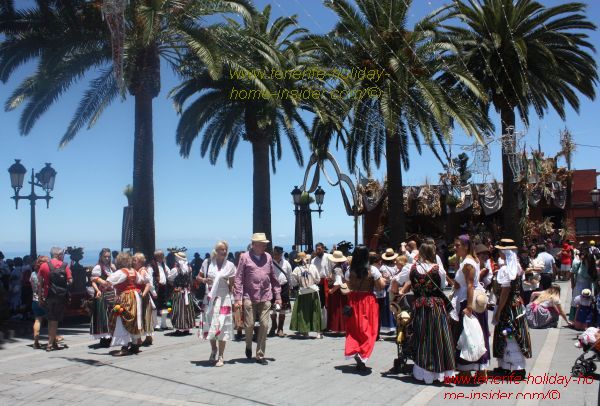 The festival whose main purpose is a religious celebration starts at Plaza Viera y Clavijo after the 12.00 noon Mass in the church Iglesia Santiago Apostól.  However, there is no Tenerife celebration without a yearly queen. A Romera mayor in this case... 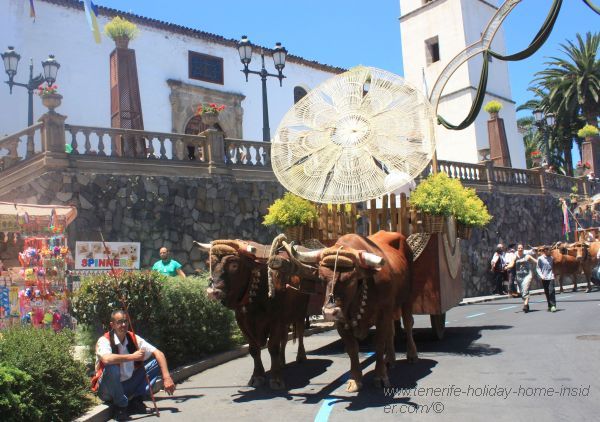 Hence,  two oxen are waiting to pull the float with her and her princesses. 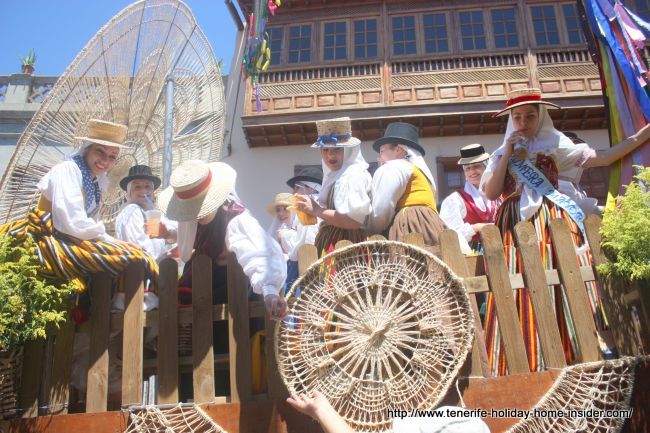 2017 float with Romera and princesses. 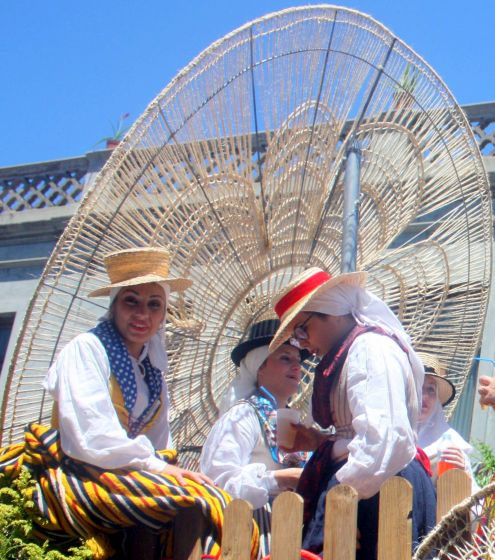 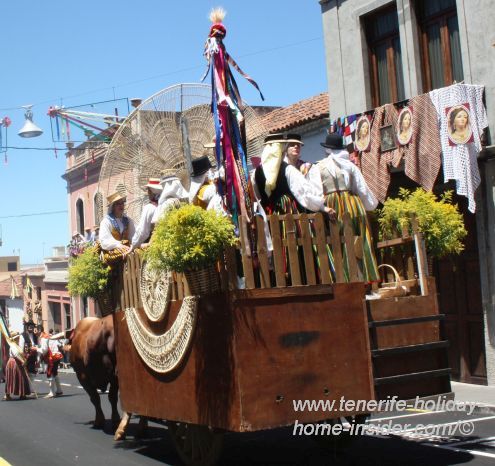 Most remarkable, gigantic float of Romeria 2017 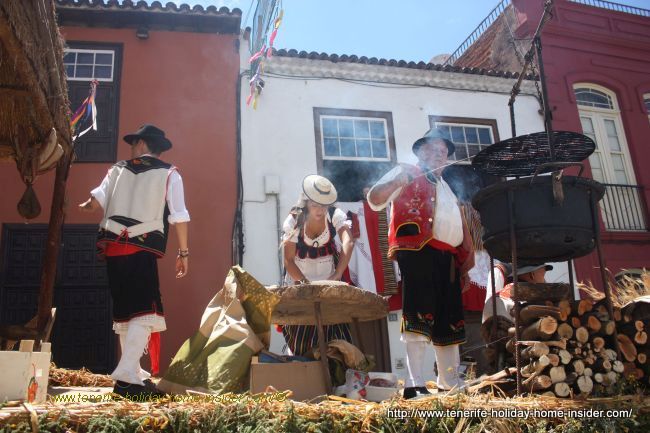 Most impressive float with farm scenes acted out.

It begins at the church Santiago Apostól by a traditional spectacle of the folk group A.F. Tigotán. Sometimes outside as well as inside the temple. 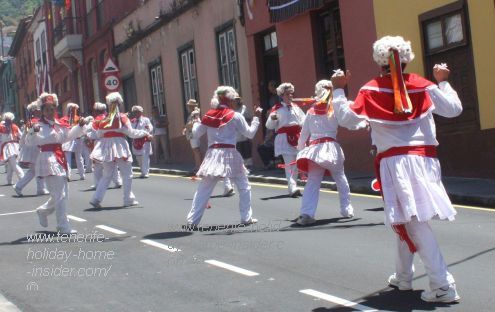 The folk dancers and musicians of A.F.Tigotán in Calle Medio del Arriba

From then on, the sound of Backpipes, Tambors and Chácaras enhances the procession of the town's patrons San Isidro Labrador and Santa Maria de la Cabeza through the following roads:

ITN stands for National Tourist Interest. It's a distinction that may be granted by Spain's Ministry of Tourism in Madrid. 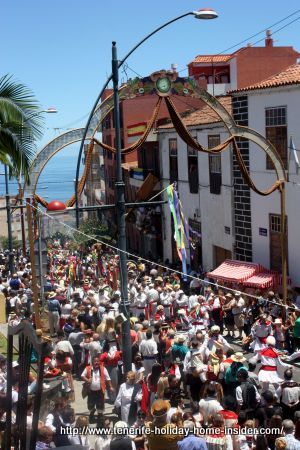 Indeed, this is justified to judge by the thousands of locals and visitors from outside. Lately, they line the streets and parks of much of Realejo Alto during its celebration.

The street parade of 2017 with over 100 groups of folk musicians, dancers, 93 ox carts and other types of floats took more than four hours. Some smaller vehicles never left the assembly spot in Avenida Canarias but celebrated there.

Why did the parade take so long?

As mentioned before, there were folk group participants from other islands, as well. In fact, they were performing during the Festival Folclorico 7 Islas (Folkloric festival of 7 islands) of Los Realejos on the Saturday night of May 26, 2017. Their participation dates back to 1976. Now, they may become a steady asset for the Romeria again.

A labor of love and stamina 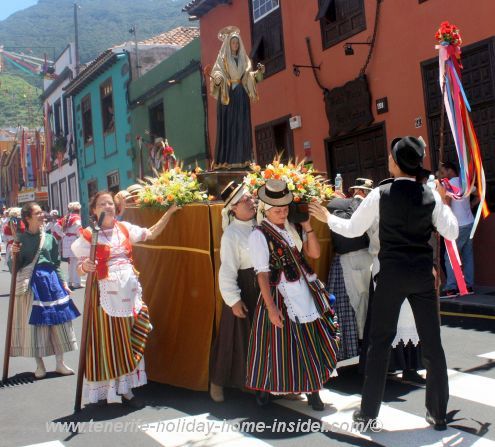 It's no easy task to parade heavy sculptures on a slope in hot sun along Calle El Sol. A Calvario, indeed... The photo shows Calle Medio. There,  downhill is much easier. 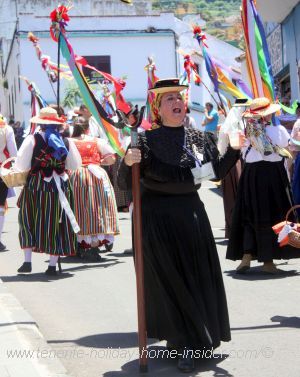 The locals prefer to wear traditional clothes on days when clouds or a breeze ease the load.  Indeed, both men and women that carry a saint are much relieved to pause here and there. However, we may assume that wheels under the statues are of extra help.

Nevertheless for sure, the yelling of a female overseer in black that the carrier women may ignore their fatigue was very  inadequate. She should have shouted Viva Santa Catalina as had done others before her.

By the way, Santa Maria de la Cabeza the wife of Isidor labrador hasn't been canonized yet. 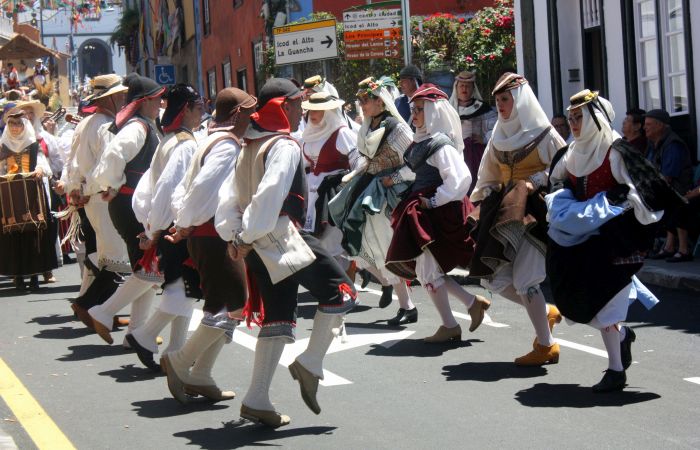 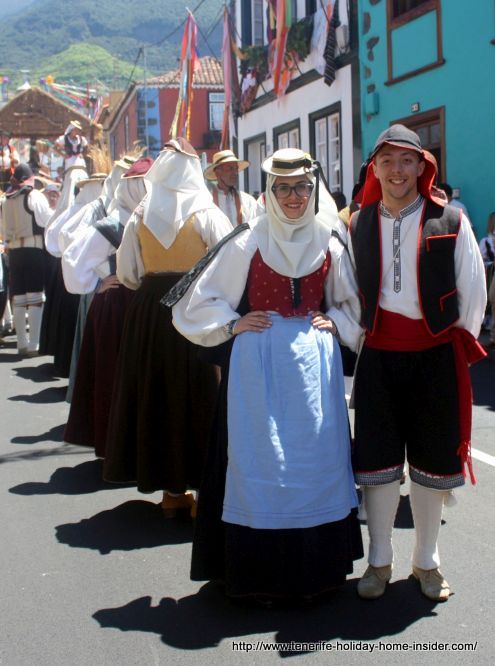 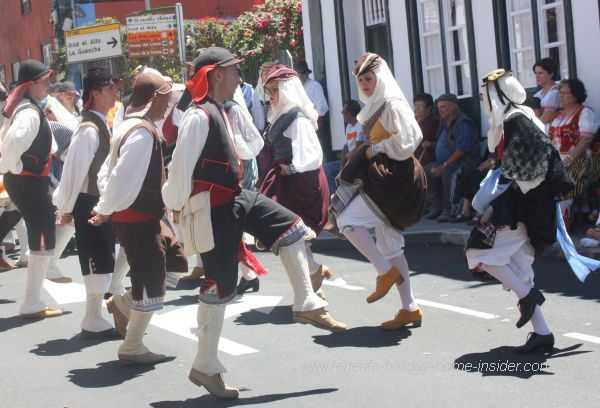 The performance of the young Taifa folk dancers from Fuerteventura was breathtaking. Once, I saw a similar exciting performance at an international folk festival at el Medano.

Not to forget the locals at Romerias when they suddenly start to form circles to dance. Their happiness is contagious. 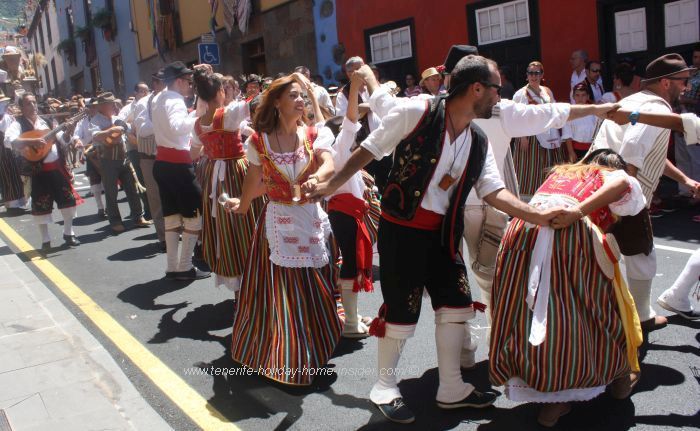 Many a spectator would wish to have hired custom clothes to be able to take part.

Major crops of the region may be harvested in abundance. The locals believe that this is thanks to their pilgrimage saints.  As a result of it, free food and wine is available for all on the day of the Romeria.

Photos of this as well as of carts with attached barbecues that were taken at an Orotava Romeria were shown here.

Believers decorate the streets of the parade with the bounty of their harvest to show their Saint San Isidor Labrador and his wife Santa Maria de la Cabeza how much they appreciate their blessings.

In 2017, an entire house front by the church was almost covered with bundles of wheat. 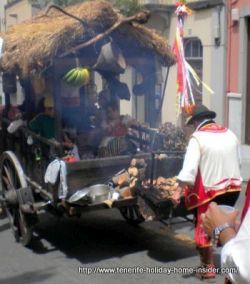 Who gets free meat

In Los Realejos, custom decoration of houses inside and outside  is also getting better by the year.

This was also mentioned in detail in the context of the Orotava Romeria San Isidro in an article about Tenerife festivals by the Tenerife holiday home insider. 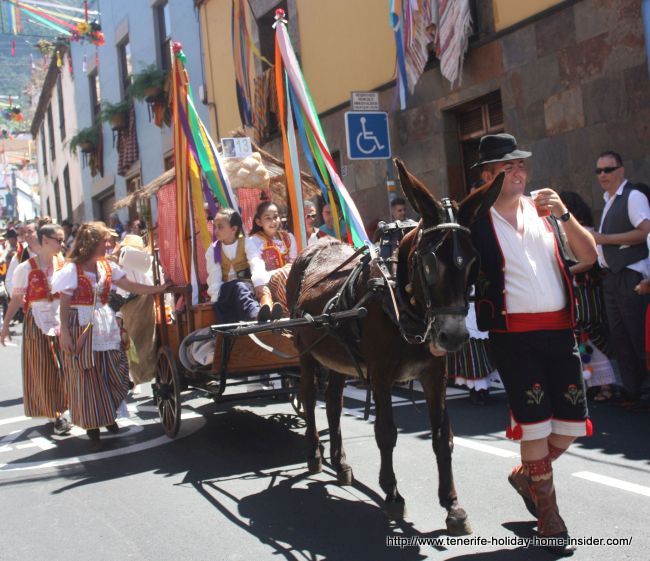 Young horse with children during Los Realejos Romeria in 2017. 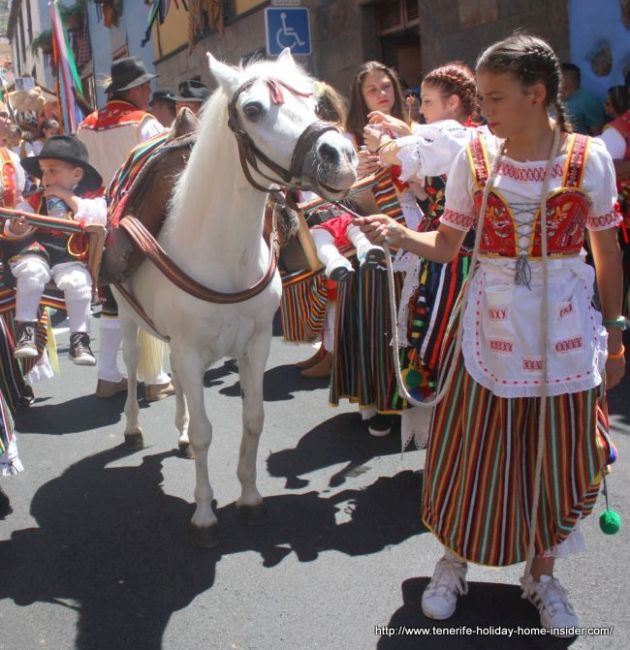 Young mare with small children in car seats during Romeria Los Realejos of 2017.

Getting to the Romeria of Realejos by Titsa

P.S.In 2019 bus 390 as well as bus 353 went from Puerto de la Cruz to Los Realejos Alto. Never forget to tell the Driver "Romeria Los Realejos por favor". He then will tell everybody where to get off. This is important, as the route may change over the years. Taxis may also drop you off,  nearby.

Kindly note: There has been some confusion regarding the name of the folklore group who performs the Chácara dance from the smallest of all Canary Islands. It's the group dressed in white costumes that are enhanced by red with caps made of white paper flowers. It was officially called A.F. Tigotán in 2019

Street show by the A.F.Tigotán by a Tenerife holiday home insider video clip

From Romeria Isidor back to Los Realejos.

All about San Isidro Labrador the Saint Isidore Laborer here.