Yet, there are so many species of this particular Crassulaceae family, that I find it difficult to decide how to name the depicted plants correctly. 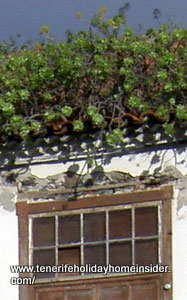 Beside, admire the picture of the living roof detail. I am glad I took that photo. Why? The spectacular, unusual roof plants were removed in 2018.

This green roof is such a genuine natural miracle, as its roof plants have sown themselves between ancient tiles.

The tiles were made locally and may be almost 500 years old.

They are all of porous Terracota clay which stores moisture. They provide almost natural air-conditioning.

The Tenerife green roof photos picture an exceptional plant habitat. The latter has stood the test of time on many of the Canary Islands, except on Lanzarote and Fuerte Ventura.

This first image is from an old house by the historic church square of Realejos Alto.
Depicted below is the whole building with its amazing crown of plants. 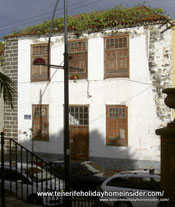 Nurishment of the green roof?

The Crassulaceae of the Tenerife green roof photos draw minerals from fine dust. It is blown by the winds onto roofs. It is most likely dust of volcanic soil or may even be dust from the Sahara desert which comes with Calimas. The flora's very fine roots reach under the clay shingles. Then, moisture is drawn from beneath the Terracota tiles from its water absorbing material and from the air.

Contrary to Tilandsias, Aeoniums or Greenovia plants on buildings don't cling to living matter but are almost air plants, nevertheless.

There is no watering or rain which spoils the habitat of Tenerife roof plants in summer. Reason being is that they must dry out then, as this is the dormant season of Crassulaceae Aemoniums. Also then, leaves are generally lost. 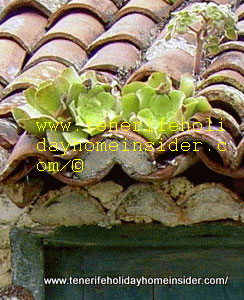 My Aeonium pictures, which portray the roof top of the old farm Hacienda La Pared beside, leave me puzzled.

Click the image to get a slightly more close-up of the roof aeoniums which are cropped to help you to see a bit better.

By the way there at Icod el Alto, they are thriving at 500 m above the sea.

Note that the roof vegetation of this farm which is known for its Peruvian potato history does not have the rather long 30-35cm long stems of the roof leek.

I researched in the Internet for a long time to make up my mind about the exact botanic specification for the plants of my green roof photos. I looked under rare plants, under endemic Tenerife and medical herbs. I consulted Tibaiba, Varode, Canary Islands succulents, Macaronesia flora, Greenovia plants, Tenerife nature and more.. I read pdfs of graduated experts, I compared photos of all possible plants in question.

I am still undecided on how to name them. 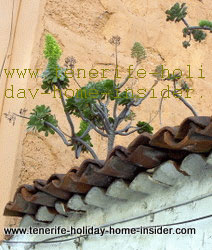 What is unclear about the roof plants ?

It puzzles me that the Holochrysum Roof leek has much more elongated leaves in general, while my Tenerife green roof photos show flora with slightly oval but shorter leaves. They seem to be more narrow where they are attached to the stem. Therefor, they may also belong to the Greenovia diplocycla species. All have about 2mm fat succulent frog green leaves in common. Only the ones with flower stems have longer foliage. Otherwise, it remains to ask if the shape of leaves may change depending on age.

The flowers are on quite long, stalky stems above the leave cluster which reaches an amount of up to 30, at least. The blooms remind me little, golden, star shaped straw flowers. This is because of their size and plump little heads. This is resembling the description of the roof leek most bacause of its foliage. It grows at about 200m above the sea in Toscal Longuera Realejos.

All the Tenerife green roof photos of this article adorn the top of ancient buildings of Los Realejos.

However, you will find the same plants on roofs of San Juan de la Rambla, Puerto de la Cruz, Icod de los Vinos and Garachico. They are typical for Tenerife North. There, soothing Elysian winds kiss towns and villages with their gentle mists in late afternoons. Hence, the green miracles of nature... 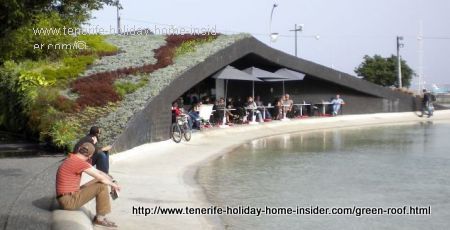 Green living roof made by man

Depicted above is the beautiful bar by the Santa Cruz town lake at Plaza de España. Indeed, this small tourist attraction has a most stunning building top. It's covered with living green ground covers and flowers. No, they are not in pots.  This is man made but, also  a stunning alternative to the ancient green miracle roofs of Los Realejos.

From Tenerife green roof back to Los Realejos which is not only famous for its endemic plants.