Candelaria Tenerife is highly recommended as optional stop-over to all travelers who go by car from the South Airport on the TF1 freeway toward the TF5 to Puerto de la Cruz. 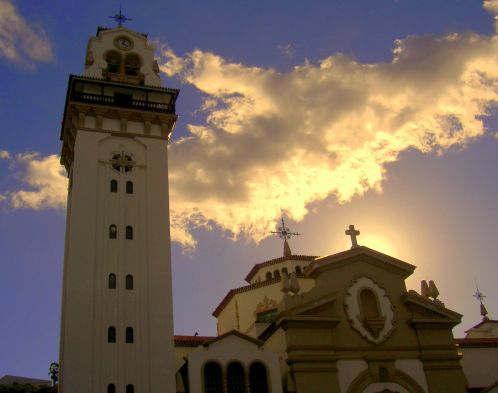 Six reasons for an ideal break at Candelaria Tenerife 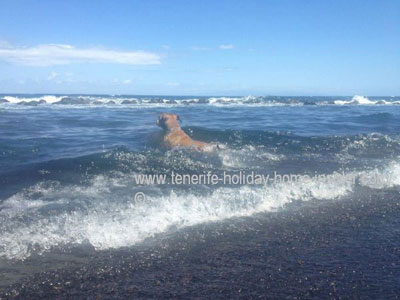 Swimming dog
Admire our swimming dog in the ocean by a sandy beach of Candelaria Tenerife. This incidence can't be on the above list, unfortunately. We noticed too late that animals were not welcome by this seaside.

A leisure walk of about 300 meters takes you along Calle Obispo Pérez Cáceres to the famous Plaza de Candelaria. This is the perfect spot for a meal by this huge town square of the town Basilica. 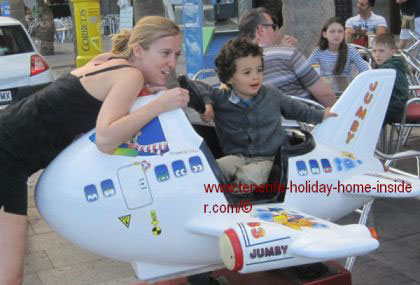 Toy airplane
There, we also helped a little visitor of ours to enjoy a toy airplane, while we were waiting for our food to be served by the 'Restaurante Plaza'.

By the way, a nearby souvenir shop called Casa de las Imagenes more of which find on Facebook attracts people of all ages. 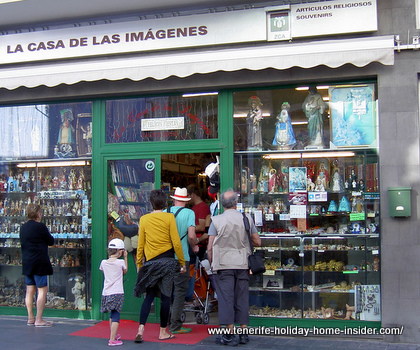 Religious images of Candelaria
Calendars, religious images, figurines and motives fill the large shop from bottom to ceiling. Miniature Black Madonnas sculptures and tiny figurines of the Tenerife Saint Hermano Pedro, sea shells and all sorts of other crafts in bright colors also draw the attention of little kids. 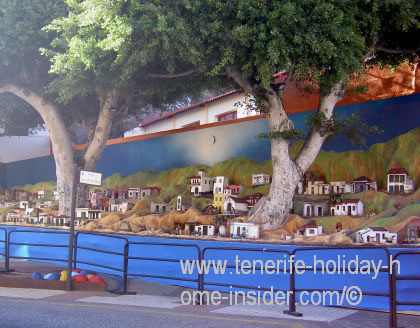 Miniature town of the black Madonna
You may also show toddlers an enticing reproduction of the miniature Candelaria town under two huge shady trees by the wayside during Christmas holidays. That spot is even closer to the car park.

Other nice places for chilling off or for having a relaxing walk with your dog in Candelaria can be seen in the following photo gallery. 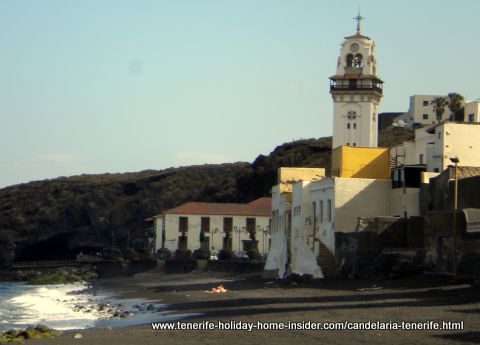 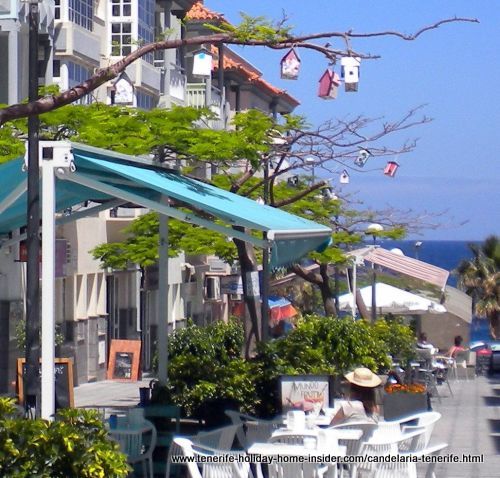 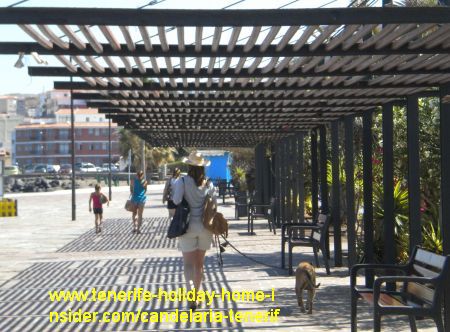 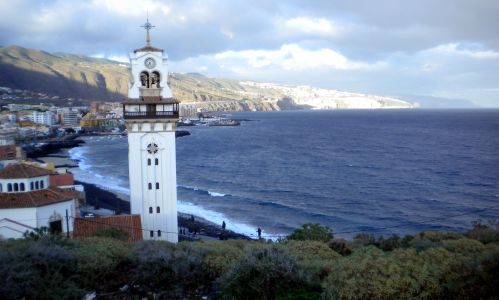 Candelaria town panorama with ocean, seasides, and mountains are seen from the lookout with endemic flora above its Basilica 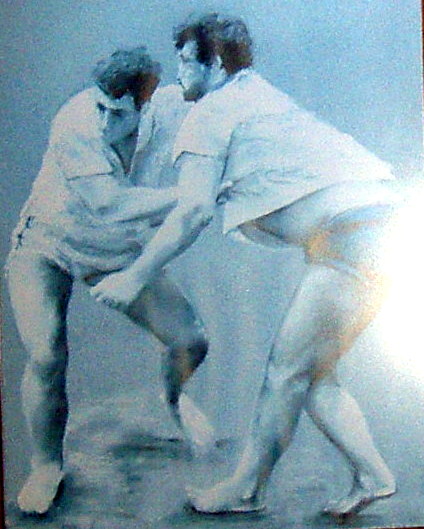 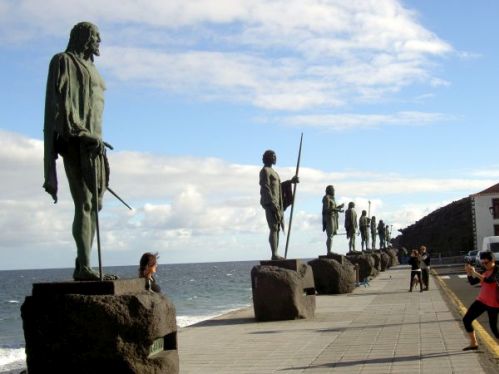 Statues of the nine Guanche Kings 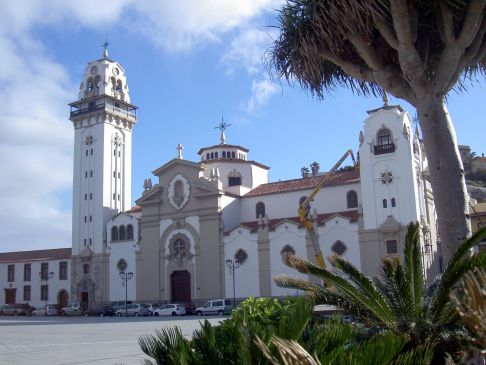 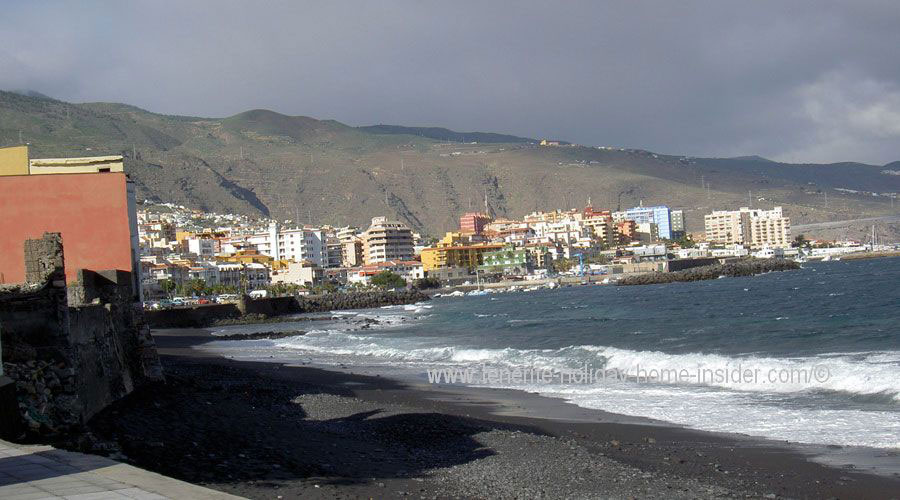 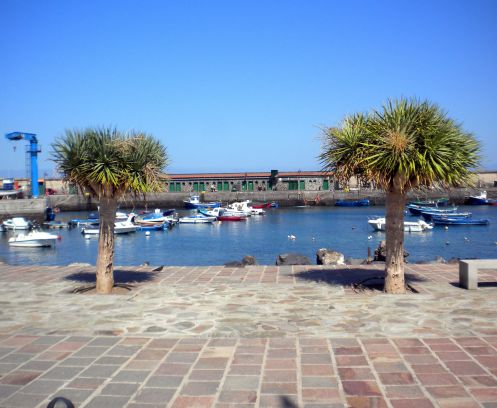 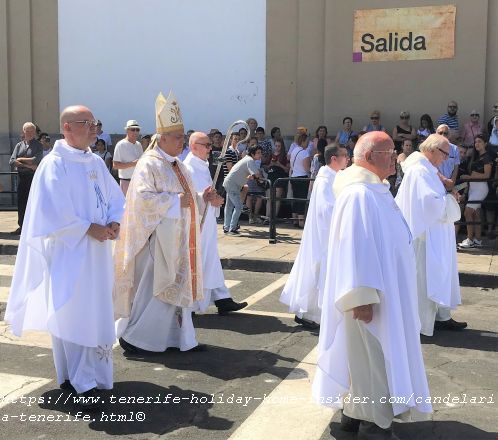 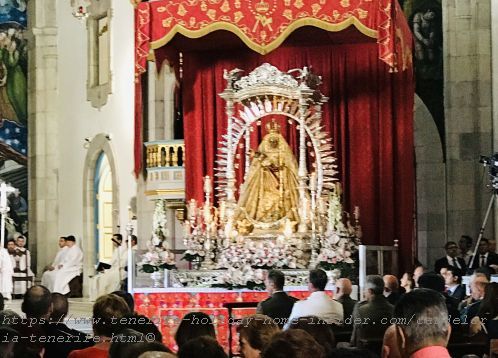 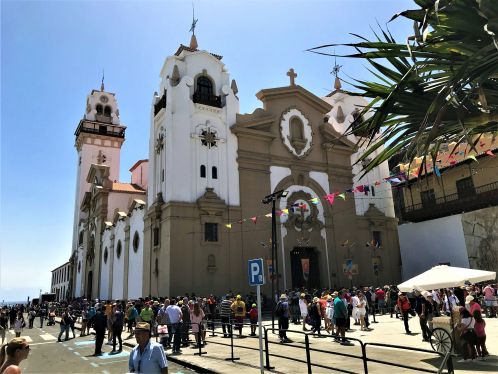 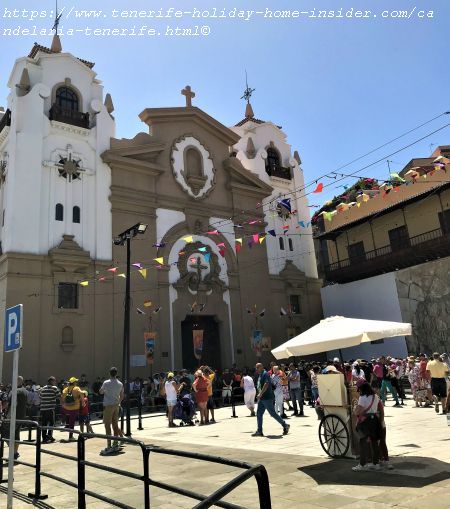 Basilica entrance with a long cue that is regulates by the security staff, police and the military. Only a few at a time may enter when others have come out. 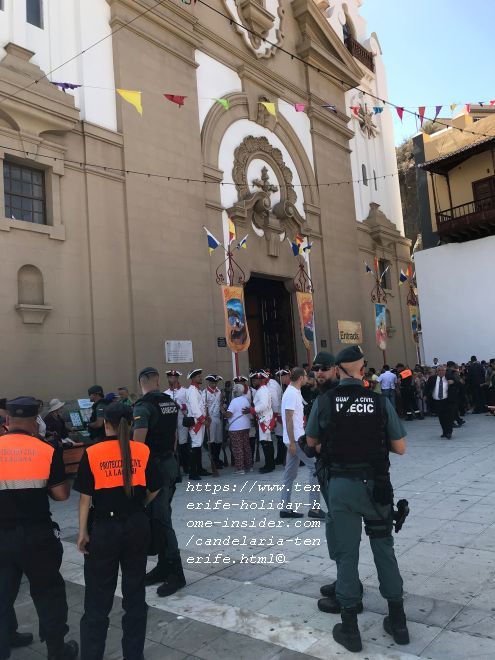 The temple of three naves with upper floor choir podium  has space for 5000 worshippers but this is strictly prevented for security reasons among others by the looks of it. Safety measures are extreme on main pilgrimage days like August 14 and August 15 at Candelaria Tenerife. Mind the other Dia de Candelaria pilgrimage days Dia de las Candelas on February 01 and 02. This is also the day when Baby Jesus Christ the son of our Lady of Candelaria had to be presented by law in the temple in Jerusalem as told by the Holy scriptures. Candels are carried through dark streets of Candelaria at night when the Rosary is prayed. 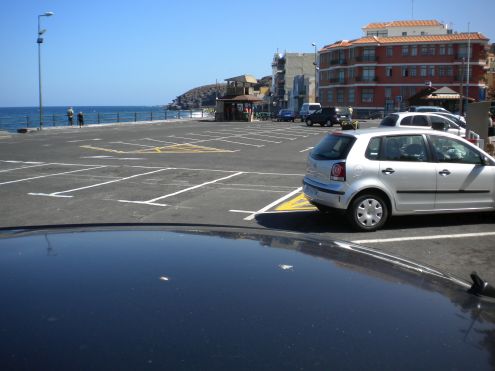 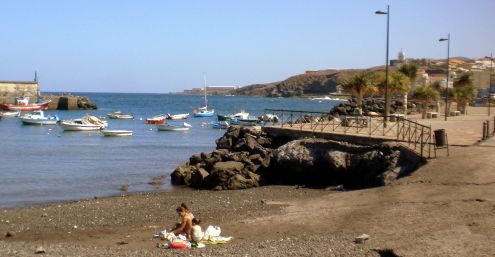 Town beach Candelaria with cafes behind 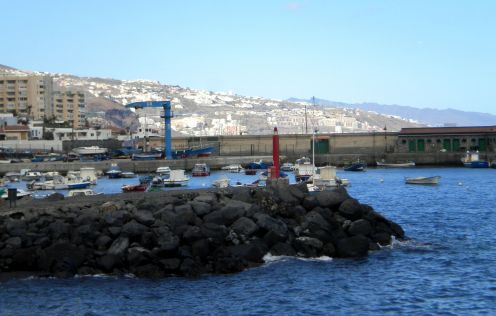 Fishing has always been a long time income provider of the town of the Black Madonna. 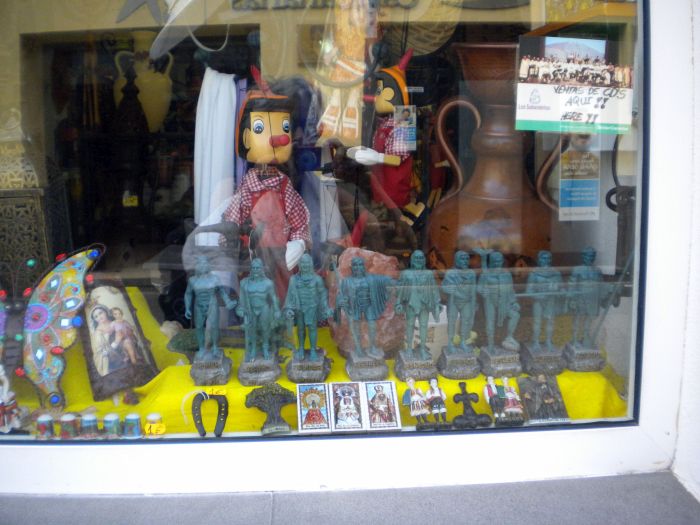 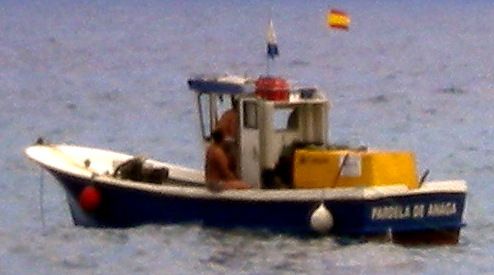 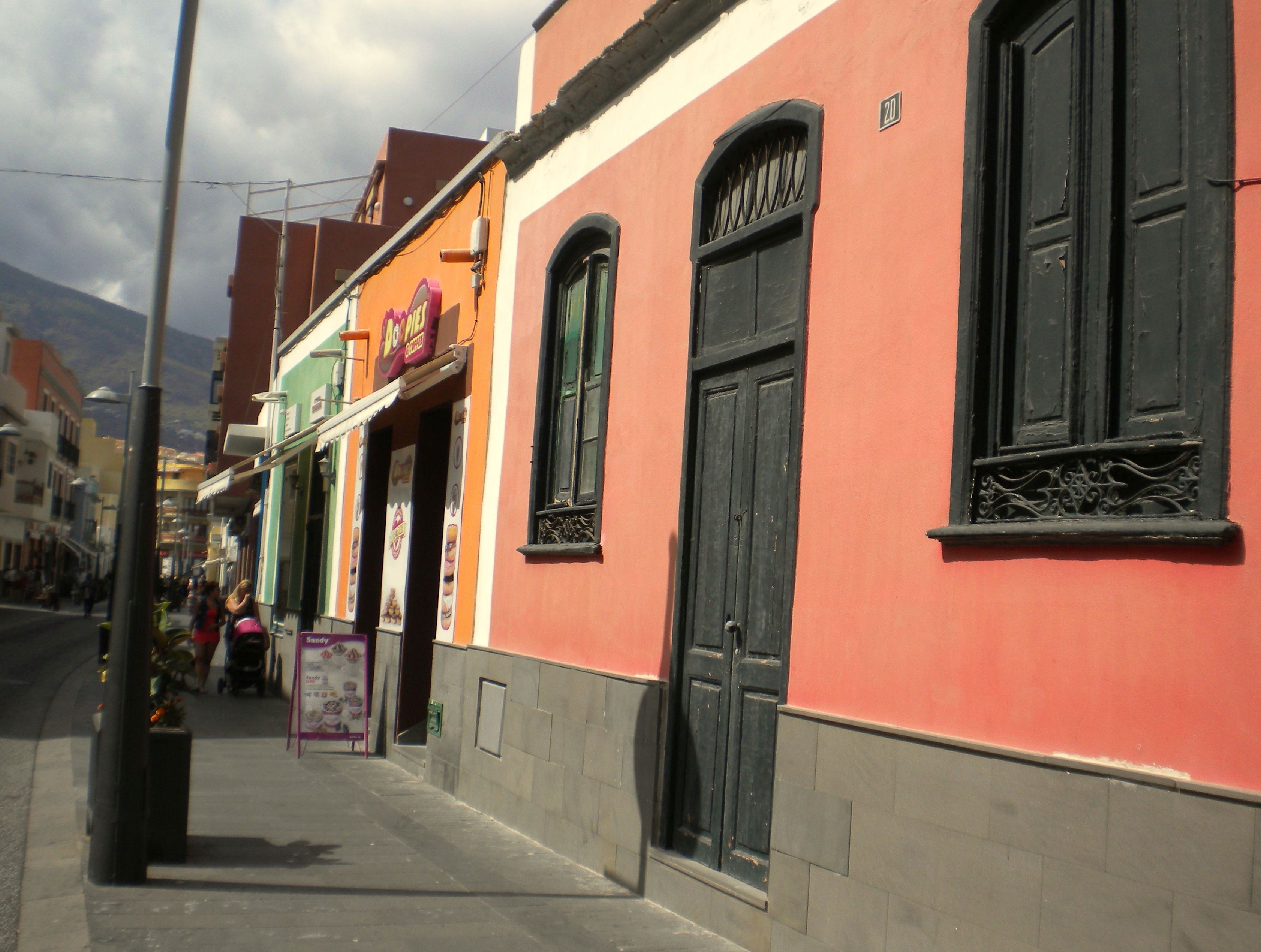 The main shopping center is Centro Comercial Playa Punta Larga on the long Avenida de los Menceyes where most of the town's business with shops, bars,cafes and more is found.

Besides, you can even buy ecological baby clothes as well as many stunning Tenerife craftworks and antique looking toys  in Calle Obispo Perez the town shopping street for tourists near the Basilica. Also look out for ancient clay pots that are made the Guanche way without a turner wheels.

Of course, Candelaria also has a farmer's market. 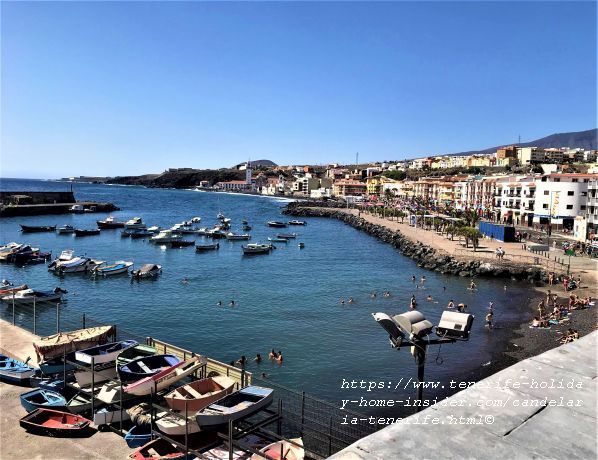 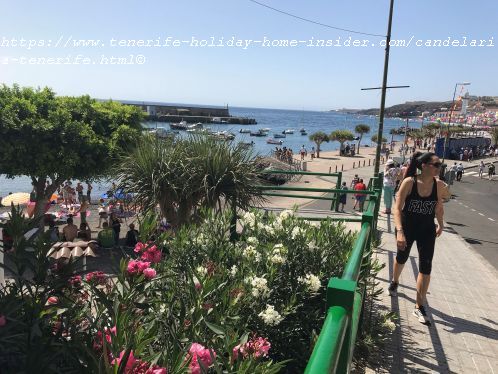 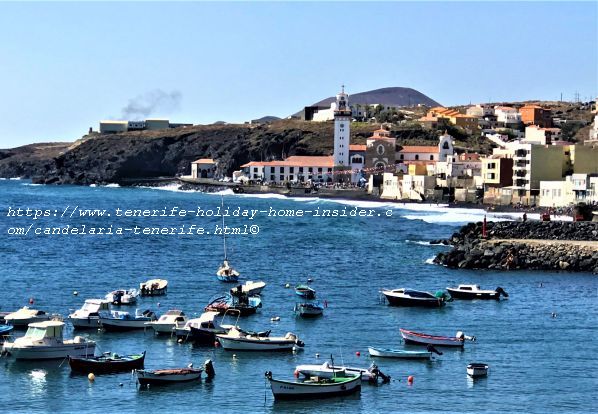 The Titsa Tenerife line 122 from the capital Santa Cruz and from La Laguna to Candelaria operates right through both nights. Good walking shoes are a must, as seating space has been found restricted by overcrowded buses. Also, the treck from the terminal on Avda.de los Menceyes to the Basilica is a good 1,5km with a short steep ascent.


The Mass Misa Santa that was so hard to get into 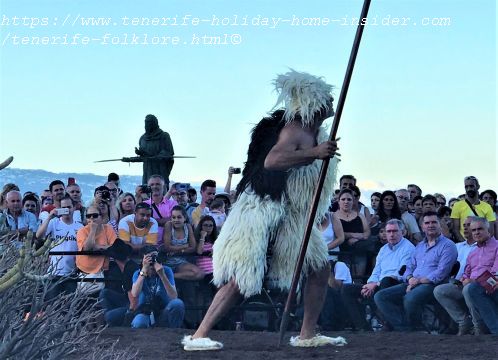 More about the Town of the Black Madonna in Tenerife

About the black Madonna legend and Guanche Candelaria caves as well as some anthropology in case you forgot to click the picture link.

From Candelaria Tenerife back to Tenerife towns