La Ermita Santiago and its magic since 1550 in Tenerife history.

La Ermita Santiago in Valle de Arriba Tenerife near Los Gigantes stood the test of time during the feudal era of Casa del Patio and, later.

This chapel even did its magic during the 1909 volcanic eruption of Mount Chinyero as is told by the locals.

The volcano's lava didn't only bypass it but, didn't harm the town of Santiago del Teide either.

La Ermita is an old church with excellent art work of sculptures and more.

Drawings of biographies of saints done in the XVIII century excel. 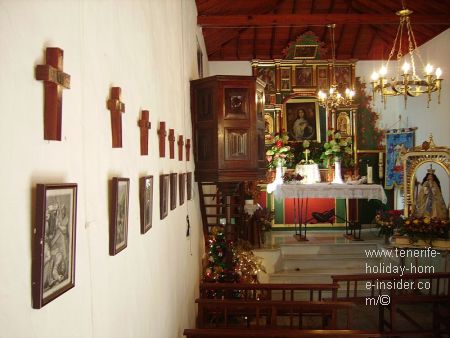 Chapel of Santiago by Los Gigantes

Perhaps, she really was once a Portuguese
mission station,  as is told.

La Ermita is not far from Los Gigantes and was built long time before the Spanish conquest of the island took place. Some say that she was later looked after by a family named Ponte.

The first Bishop Bartolomé Garcia Jimenez
of the parish of Santiago which was later called Santiago del Teide could convince
the Lord of the manor Casa del Patio to
built the church San Fernando Rey (King) for
the community.  Then, the chapel became part of its parish.

A drive of a mere six minutes connects the two temples of worship.

Inauguration of the church was in 1679.

More historical details are to be found in Casa del Patio which is a feudal estate of significance in Tenerife history as well as for the town of the so called Gigantes which are its giant cliffs. 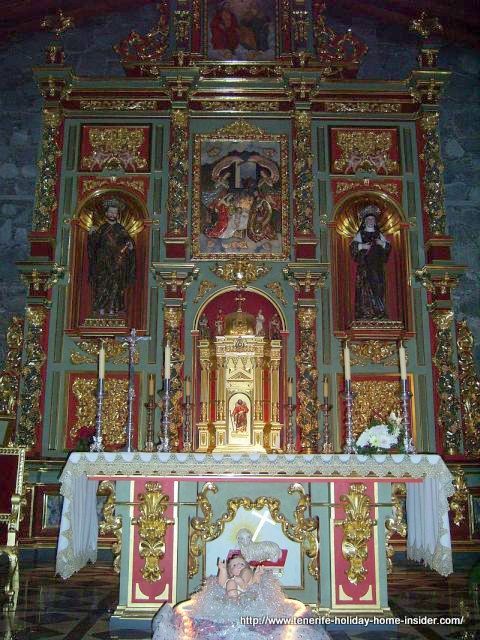 This historical Santiago del Teide chapel  is like most Spanish churches with much
red-gold by its Spanish altar. Gold leaf covers elaborate timber carvings. Restoration of them is costly, as woodworm attacks them,  eventually.

Even the endemic Canary Island TEA pine may not be immune.

It's rather dark, but cozy inside the islands' churches and chapels.

When attending mass you will of course only hear Spanish songs which is a different experience for the foreign Tenerife tourist.

Trying to join in helps to learn Spanish fast. 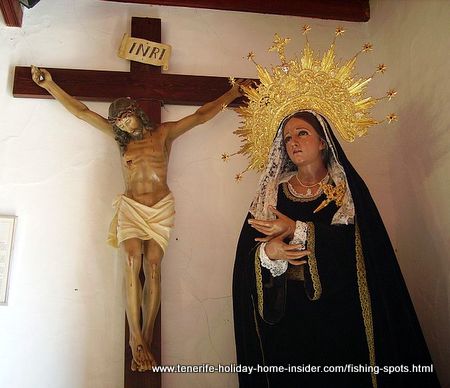 Needless to say, a silver or wooden Crucifix as well as a Madonna sculpture are hardly amiss in a Tenerife chapel.

Of course, Tenerife has many wonderful churches besides many exquisite chapels all called ermitas. Most are found in Tenerife North, but also in the capital. Then there is the cathedral in San Cristóbal de la Laguna. Not to forget is  the Basilica in Candelaria  with the black Madona the patron of all Canary Islands.

From La Ermita Santiago back toTenerife History Los Gigantes to find out more about it.