Los Lavaderos el Sauzal which is also known as Parque Los Lavaderos is an entrance free historic park of laundries. It was restored in 1987. 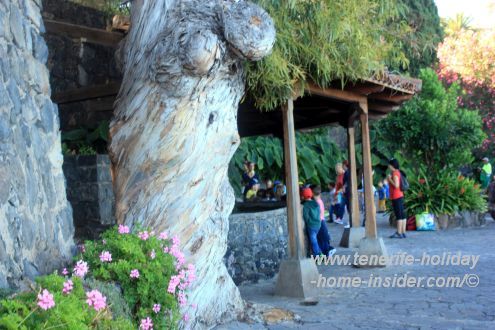 It's a large semi shaded oasis on a few terraced levels with subtropical and tropical flora that loves semi shade and moisture.

Center stage are the Lavaderos the laundries. They are ancient basins below natural fountains. 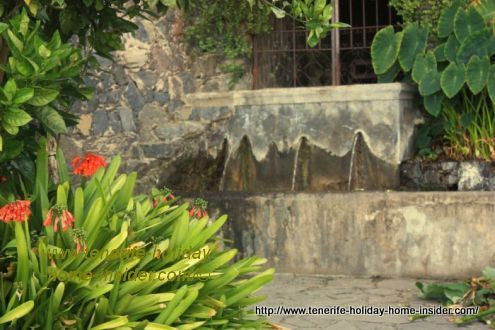 Natural fountains which come out of rocks.

Their water gushes from about a height of half a meter into a man made,  narrow water reservoir.

From there,  it finds its way into other bricked up containers. 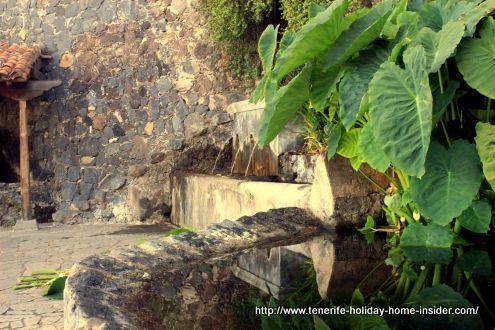 Ferns and other flora also flank this ancient laundry basin. Not only green leaves but also rocks are mirrored in it. 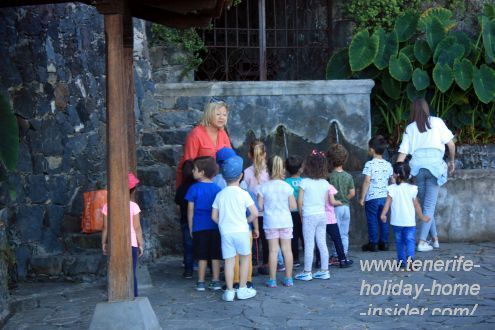 She had come to visit the park with four year old kids. A class of older children arrived shortly afterwards.
The little ones were told that this was the place where their grand mothers gathered. There, they did the dirty laundry. Mind that the age of washing machines arrived in Tenerife only by the end of the Sixties and Seventies of XX. 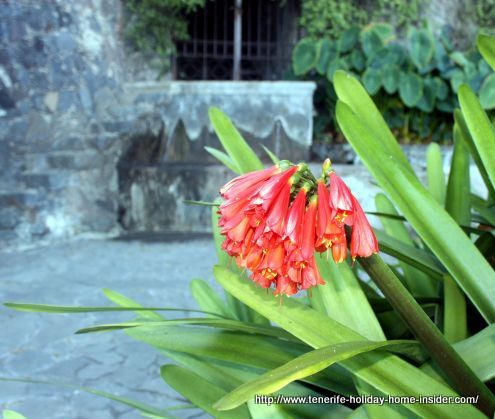 Clivia plant a leading feature at the Sauzal park.

Ancient installations not without merit.

It's fascinating to see that all laundries with basins and ponds of Los Lavadores El Sauzal are in a practical height.

That means that the women of the region could do their communal washing in them without having to curb the spine.

Bending down to work can be back wrecking, you know...   By the way, they could also have a thriving social life by easily chatting to each other. Nowadays, we know that this together with healthy nutrition, walking and physical work helps us to live a longer and happier life. 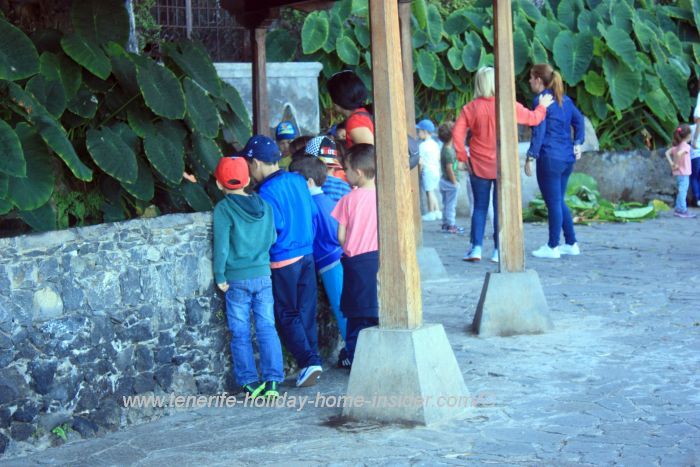 Laundries which are called Lavaderos where school kids look down onto them. 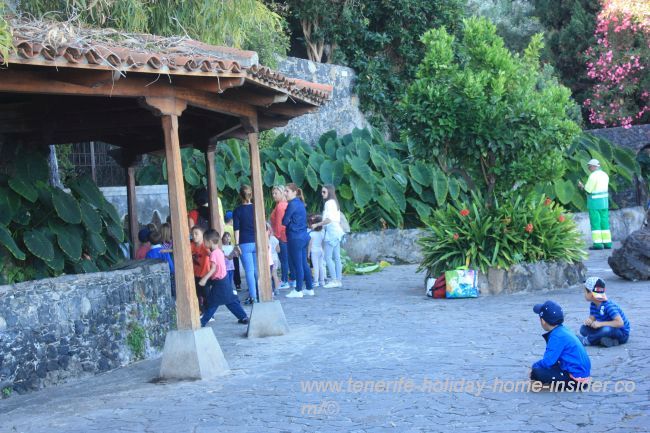 Naughty boys made to sit on the floor in the back of Lavaderos.

Where find this enclave of Sauzal washer women? 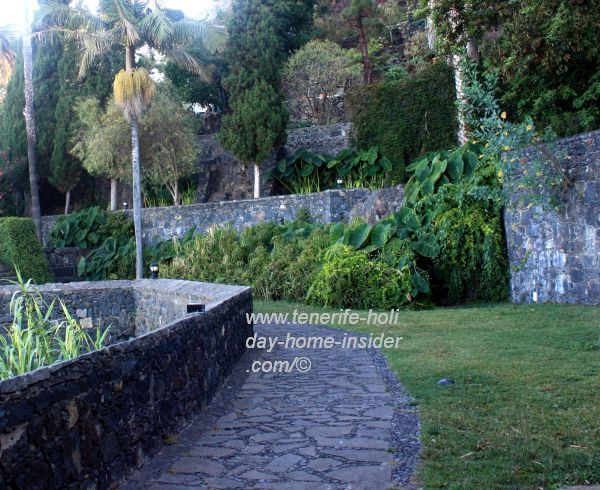 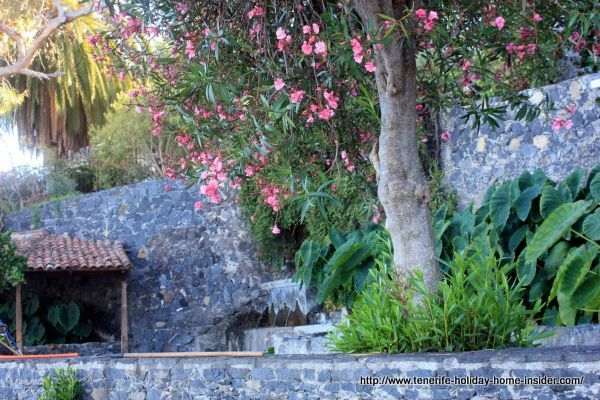 Park with tall trees on several levels at El Sauzal.

The Park Parque los Lavaderos has many sections that are semi divided. Mostly low walls were used. All were built with natural stones. 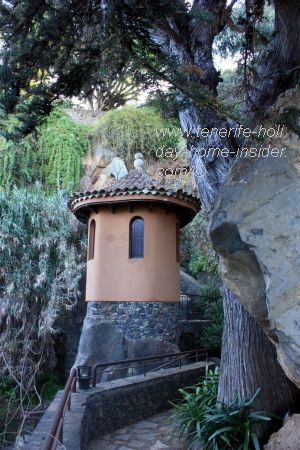 Pathways are as rustic.

By the way, the morning sun is blocked by the tall background wall. There, tall palms, Ficus and Oleander trees as well as Cypresses obscure even more light.

Otherwise, everything is in total harmony.

The Elephant ear plant with its gigantic leaves contributes to the park's theme. So does the Clivia plant.

A picturesque tower is just one of the many features in this enchanting shade enclave.

Some afternoon sun enters, though. That's why you even see some lawn.

Getting to Los Lavaderos El Sauzal from the Town Hall.

A Google Map shows the way on foot down Calle Siervita de Dios.

The street named after the Siervita De Dios is opposite the small car park of the Lavadero gardens. It is extremely steep. I'm an elderly person and it cost me a good fifteen minutes and many sips out of my water bottle to climb it. Nevertheless, it's not much more than 220 meter long, I would say. It takes you 290m to get back to the Town Hall El Sauzal, as per Google map.

By car from the TF5 freeway to Los Lavaderos El Sauzal. 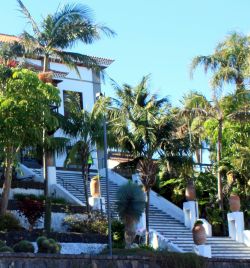 Take Exit 21 and turn into Carretera Los Angeles/TF1224 until you see the Town Hall of El Sauzal on your right. Pass it and turn left into Pje. Hermanos Toste after the popular Cafeteria Rico Rico.

Proceed via C/Sierva de Dios before it turns uphill by the entrance of the Lavaderos park.

It's at the end of the main level which is not well portrayed by the photo.  Anyway there, natural stone steps lead down to the seaside. A breath taking panorama opens, as soon as the shrubs end. The suburb Los Angeles offers a picturesque sight in the foreground.

Unfortunately, I could not walk further. No rails, ropes or bushes prevented my sudden vertigo. 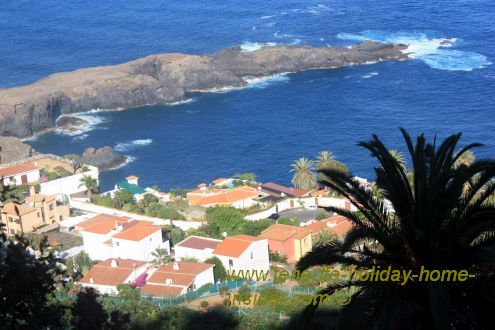 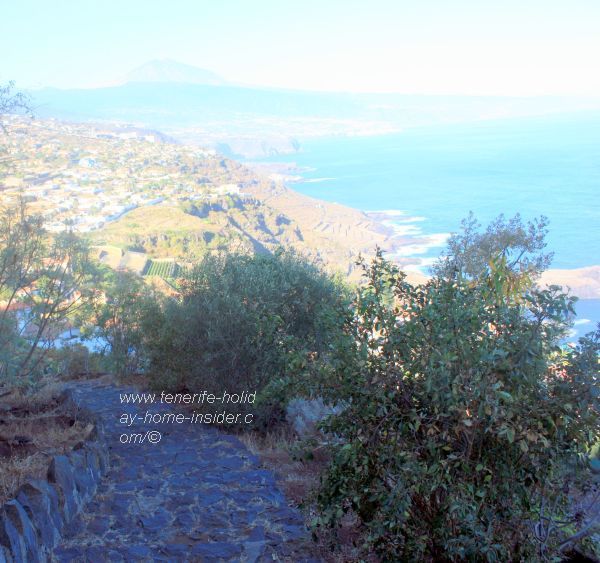 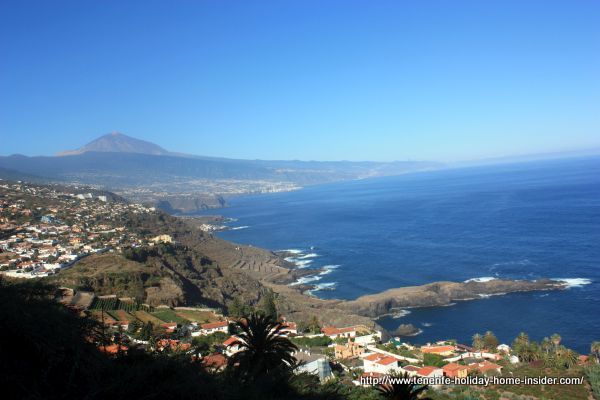 The Orotava Valley, Buenavista del Norte and the Teno Massif may be visible from Costa del Sauzal on a very clear day. The Tenerife holiday home insider took such a photo further down the coast from Cafe Vista Paraiso.

Bar cafeteria Los Lavaderos and a nearby Restaurant.

Bring some refreshment. I visited the Lavaderos on a Friday morning on May 26, 2017. The doors of the cafeteria were shut.