Playa San Marcos Tenerife is so much nicer than I thought. 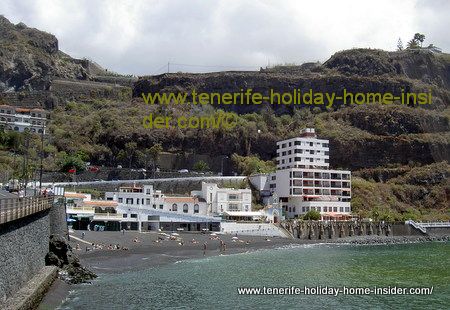 Playa San Marcos Tenerife
It was on our way of a day trip towards
Los Silos Playa Agua Dulce near Teno Mountains.

The Icod los Vinos beach is so amazingly tugged in its small bay that one feels like in a beach oasis, almost.

The outstanding early May summer weather with around 30C played its part.

The beach doesn't look like more than 160 meters long

Quite a few people were swimming in San Marco's Atlantic.

I discovered little children and a small dog frolicking by the water's edge.

Generally, dogs are not allowed on Tenerife beaches. By the way, there is a very unusual feature on this Icod de Los Vinos beach front. It's the grave of the little dog of the owners of the Italian beach Restaurant called 'La Cocina de Doña Rosa' of San Marcos. 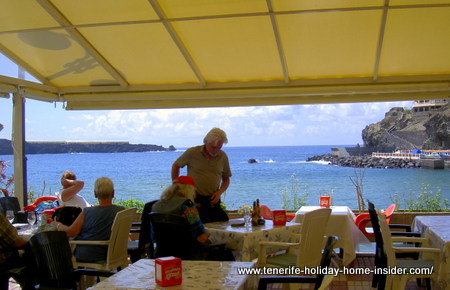 Cosina de Dona Rosa Restaurant terrace for good Italian cuisine at reasonable prices. Yummy cakes are also on offer. Service is excellent.
This restaurant of Doña Rosa where we had a cheap pasta lunch is a rather inviting asset of San Marcos beach. 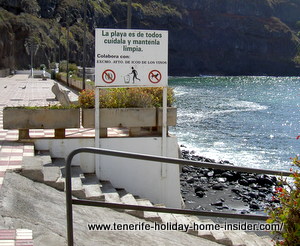 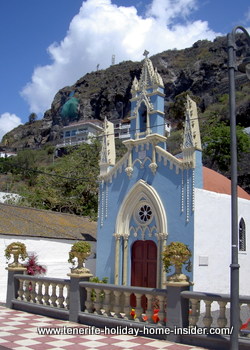 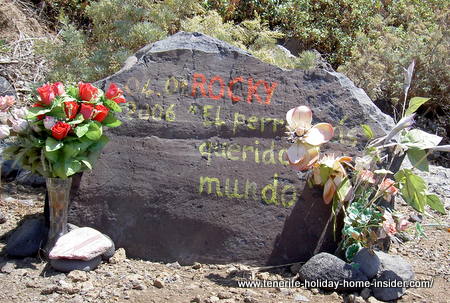 Sitting under the shady restaurant canvas roof you can see San Marcos Aquanaut Club high up on a mountain outcrop by one side of the bay.

My friend Guenther pointed this out to me. What was very practical at San Marcos beach was how near the shore we found parking for our car. 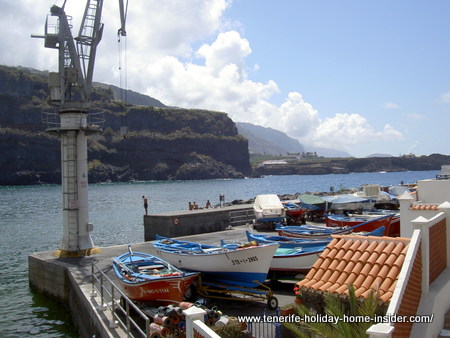 Ship repair wharf by Playa San Marcos of Icod de Los Vinos Tenerife
There was another magnificent panorama. We spotted it when we were standing behind the boat dry dock, a boat shelter, about 50 meters from the Italian restaurant Dona Rosa. There, the mountain crops by the other side of the bay invite experienced alpinists to take them on.

Some weeks later, my friend Guenther told me that he had gone swimming at San Marcos beach.

He found it difficult to get into deep enough water to be able to swim because of many big round pebbles of different sizes below the water surface close to the water's edge. He said he had to stalk over those stones for too long and could only, eventually, dive in. However, on his return he had the same problems to reach shore. He said that a friendly beach warden was watching him struggle to balance and came to his rescue.

Guenther also added that I most probably wouldn't lose my balance because of the hidden submerged stones as I am less clumsy. Those were his exact words. You can imagine my surprise to hear this because, San Marcos beach looked so perfect to me.

Unfortunately, I only found something in Spanish about alpinism at the Icod los Vinos beach. However, it was part of Spanish news. Placing a link would also be useless, as the media deletes old publications fast. However, here is a Facebook page about the Playa San Marcos. At least, it has photos and never mind the Spanish text.

From Playa San Marcos to Tenerife beaches which are on four coasts.