Shopping in Tenerife for fish and seafood by season

There is always a best time and place for shopping in Tenerife for special fresh fish on the market.

Hence, a holiday home in Tenerife or its rental is ideal for those who love to prepare their own seafood. 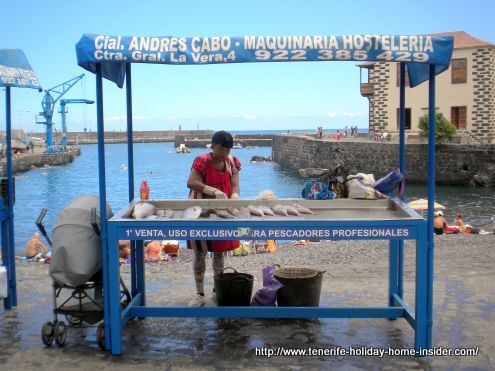 Best fresh seafood sold in winter and around Christmas 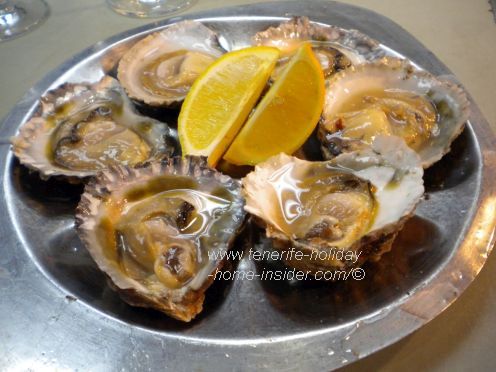 Mind that almost any big fish may appear on shop shelves sporadically in between seasons, as well.

Shopping in Tenerife for fresh fish from May to September

Caballas the Mackerel blue fish are amoung the best buys in that season. The Mackarel will help to lower high Cholesterol and is so rich in healthy Omega3s. The Caballa sold then is generally up to 20 cm (about 7inches) big.

From June right through summer

Encounter Merluza in those months. Look for Merluza the prime Hake from around Cadiz or for fish of Northeast Atlantic origin which includes the Bay of Biscay...  Good quality Merluza should not be Cariocas the immature fish. 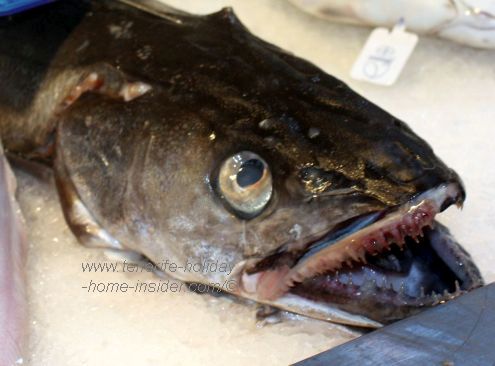 Mind Mercadona that gives you tags of origin.  Note that Bacalao which is also from the Cod family should be much cheaper than Merluza.

Bonito season from end of June until September or longer 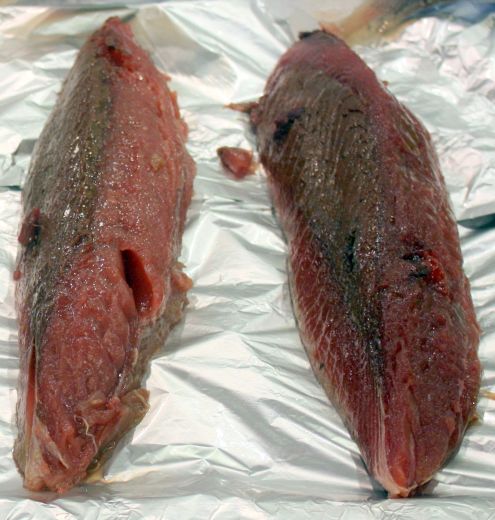 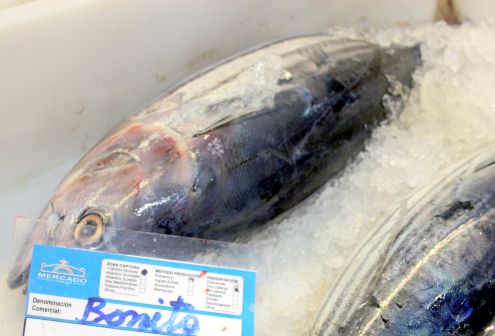 Bonita Tuna compared to Skipjack Tuna while shopping in Tenerife

The real Tuna fish the Skipjack Tuna always turns pink inside when it's cooked, while a Bonito Tuna will remain white or off white.
The Skipjack is a Tuna fish of warm and tropical waters and not of Tenerife or the Atlantic. It is also the one you buy most of the time in tins.

The municipality of Puerto de la Cruz has several Mercadona shops. Most of their fresh Bonito Tuna is sold as entire fish. Stocks left on shelves may vary of course. Hence, a 10 kg Bonito may be too big for you to purchase.

A Bonito fish bought as one piece of 3,45kg for about Euro 10 at Mercadona Realejos. The price was Euro 2,95 per kg on August 26 of 2017
This delicious fresh fish was microwaved on full for 20 minutes. Bones were removed and junks of it were placed in a home made fish curry marinade made with olive oil in a closed plastic container to avoid freezing. Important is that oil covers well.

The price of cut up fish

Any fish that's cut in portions will not be cheap. The Bonito "Tuna" isn't an exception with shopping in Tenerife.
However, the quality of this seafood may be priceless to lovers of fresh seafood, although it's not the top or real Tuna.

Fishermen never mention if they caught a male or female fish. Otherwise, there are almost as many varieties of species of Bonito Fish as there are types of Papas Bonitas Potatoes. There is always one you will favor. Local fishermen of Spain think that the Bonito del Norte (Thunnus alalunga) is the best. It usually leaves the Portuguese Azores in Spring to be in Cantabria Spain in Summer. It doesn't cross the Atlantic as far as Mexico like other Bonito fish.

Where get the Bonito del Norte Tuna in Tenerife?

Carrefour would be your best bet so I was told. Otherwise, the Municipal Market in La Laguna.

Fresh fish on offer in Tenerife around July

Ten interesting questions about the Bonito fish may be found in Spanish at Web Mercadocalabajio.com.