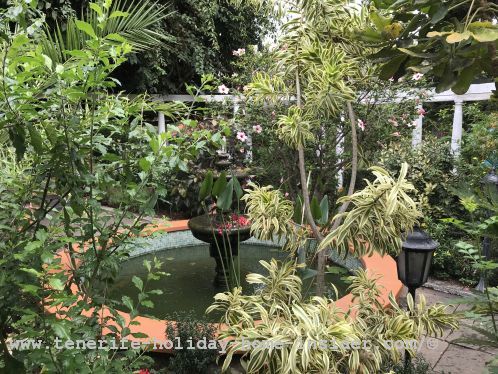 Sitio Litre with its iconical Victorian flair fountain, arcade and striking landscaping with subtropical as well as tropical plants

It dates back 244 years to date in 2018 to the Scottish businessman Archibald Little. Only the Norwegian Hans Malling whose name sounds German was an exception of a one year ownership due to his passing away.  Charles Piazzi Smith a respected UK scientist purchased it in 1852 until the property went to its recent owner Mr.Carruthers. More about it later...

The pathway outside the fairy tale garden

The name of this alleyway just like the property it borders went from Camino Little to Litre, because locals kept on saying Litray, as not to break their tongues.  The estate was only known as a site, hence a Sitio, contrary to farmsteadts in the region. 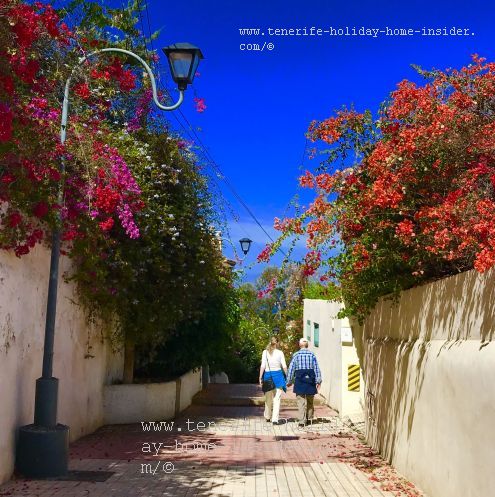 This picturesque walkway is a must for a romantic stroll. It's also a convenient to reach spot, as it almost touches the hub of town.

It's beside the deep Barranco of Martianez gorge which becomes a river after heavy rain and a blessing for gardeners. 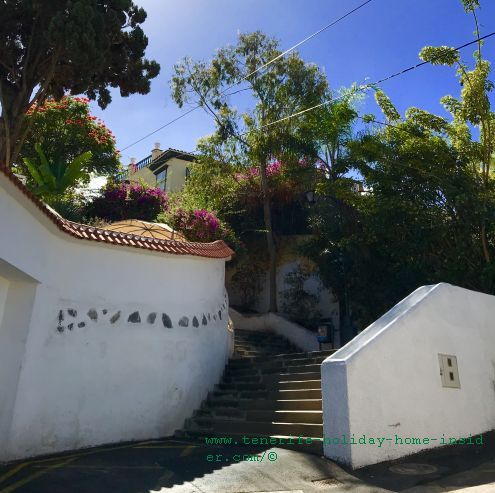 The stairs of the alluring lane beside Barranco Martianez, most of which is for pedestrians only, while the mansion of the Orchid property is seen on the right after about 40 steps. Its wheelchair access is only possible from the top of the Alley by Carretera Botanico opposite the petrol station.

On the bottom of the stairs is a strange building. This half ruin of an abandoned home called Casa Guanchita has puzzled more than one person who asked questions about it online. 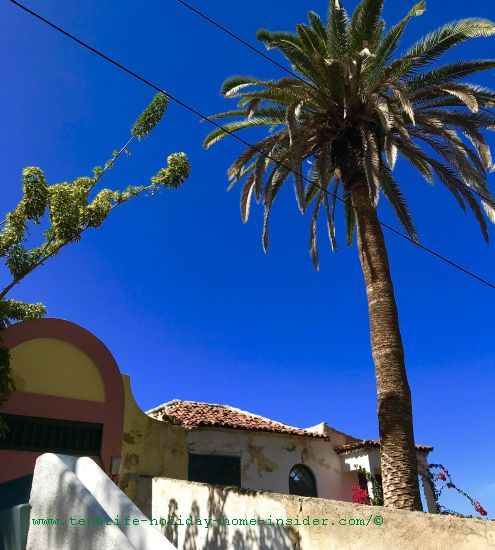 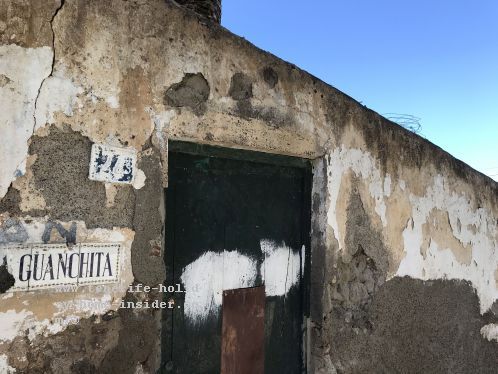 A Guanchita is a Guanche girl. Unfortunately, it remains a secret why a house could have belonged to a so-called aboriginal girl a Guanchita that may have been a maid or even a slave in her days, unless of royal Guanche origin.

However, it is the historical garden of the long gone Archibald further up the stairs that has been in the limelight again since about 1945.

It all started again with Mrs. Mollie, as I was told by a kind neighbor who lives opposite the Orchid Site the Sitio. 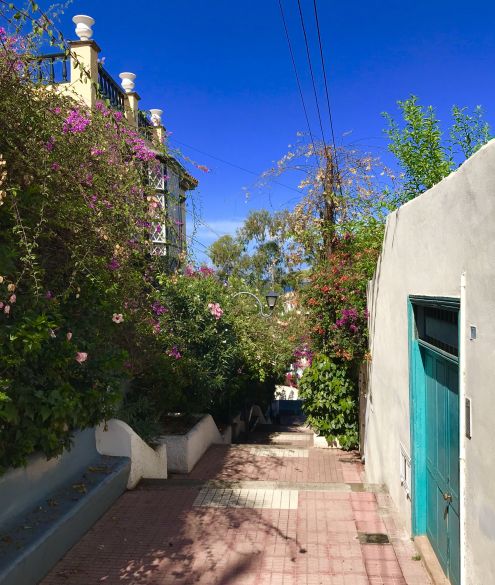 Casa Mrs. Mollie of the Sitio Litre where it faces a nice neighbor's property by its outside alleyway

He was thrilled to remember its late owner Mrs. Mollie. "She had this medium sized yacht which he called the Cruzero Andes (a cruise ship) and everybody loved her" he said.  She grew up in London in the roaring Twenties and eventually inherited the Orchid haven, but only moved in after World War II.  This society darling of the Canary Islands and Puerto de la Cruz brought the Sitio Litre back into Vogue again. The neighbor also said that a very big terrain made up the property which he pointed out with a wide move of his arm. In fact, its initial 25000 square meters were subdivided, long ago. The 1.4 acre that remained was easier to manage.

The nice gentleman didn't talk about Mr. John Lucas Carruthers. However, it was Mr.John who purchased it last and turned it into a family enterprise after painstaking restorations.

Indeed, the gentleman Don John Lucas is also some great great- grand-descendant of the initial owner from 1774 the Scottish businessman Archibald Little. Don't ask, as there are stranger things in life... 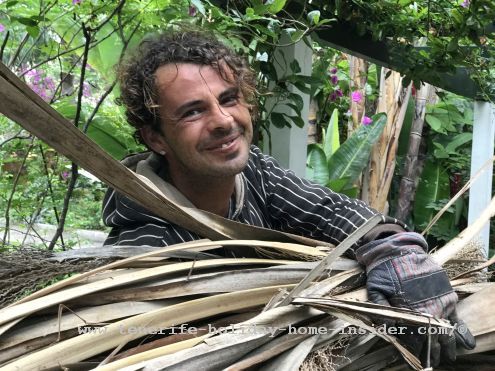 Work never ends in the narrow archways, nooks and alleys where shrubs with brilliant blooms in purple, orange and more colors form canopies on top and jostle for space in a precious enclave of a primary subtropical 5500 square meter garden. 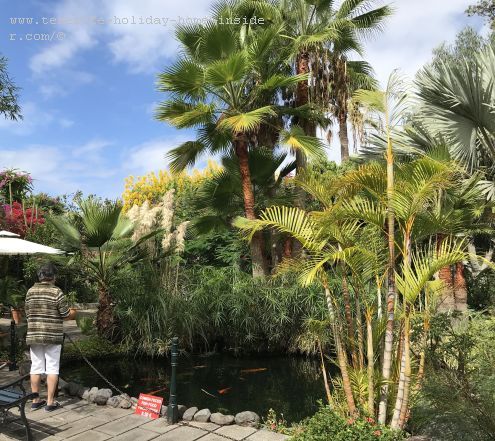 Feeding the Koi carps by the entrance of the park beside the sea rose pond where one black carp is very big.

Things to do at the Sitio Litre besides feeding the Koi

Fishfood is sold at the entrance. 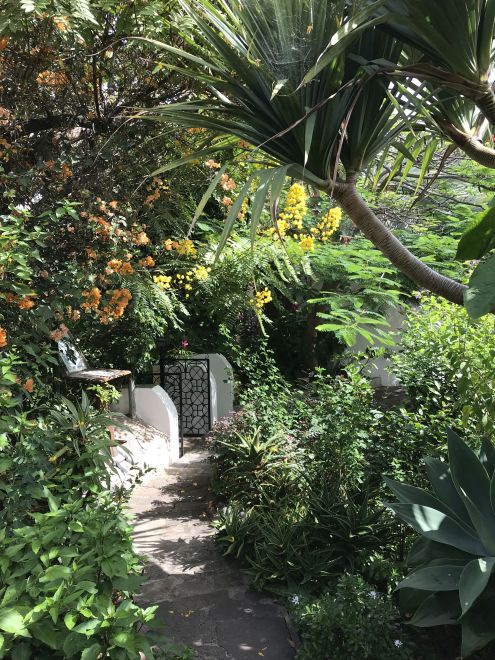 Agatha Christie's path that leads to her favorite nook that also reminds the mysterious Mr.Quinn 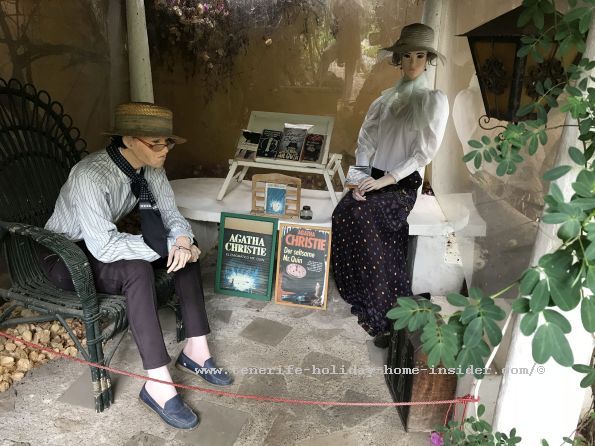 Mysterious Mr.Quinn with Agatha Christie in form of wax figures. - Mr. Quinn features in the writer's episode "The man and the sea" of the thriller she wrote in 1927 when she stayed in Tenerife with her little daughter.

You can contemplate a small historically important gallery of depicted celebrities. They all visited the Sitio since Baron Humboldt has left his marks in 1799 together with his companion Aimé Bonpland a later protégé by Napoleon. There wasn't only Agatha Christie in 1927, but also Olivia Stone whose description of 1882 of the Ridge and gorge of Martianez has also historic value. A portrait of the Victorian botanical artist Marianne North and her paintings of Taoro and the ancient Drago of the Sitio are precious relics from 1875. The bulk of her 832 works have a unique gallery at the London Kew Gardens. A photo shows the Scotsman Lewis Jellie Hamilton of 1839 whose firm still exists in Santa Cruz today.  There are also commemorating photos from the Westerdahl Museum. They depict artwork by the British surrealist Eileen Agar and also show her together with others like Salvadore Dali. It may have been 1927 when she passed at the Orchid enclave.

Some speculate that Onassis and spouse as well as the Ballerina Margot Fontein passed by, as the owner of Sitio Litre had been at the Onassis yacht to welcome Churchill to Tenerife.

Come to this place of orchids which is open from 9.30 to 17.30 and discover two more famous British visitors... 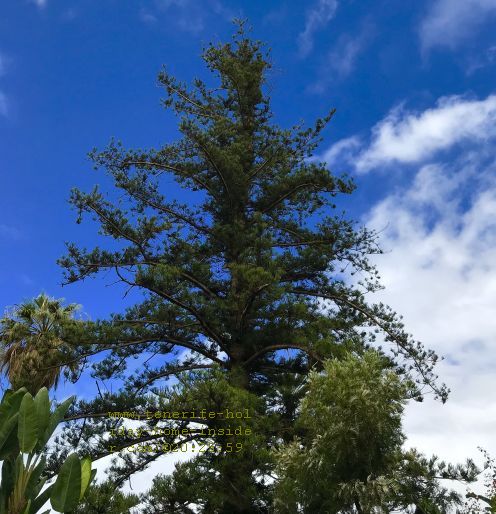 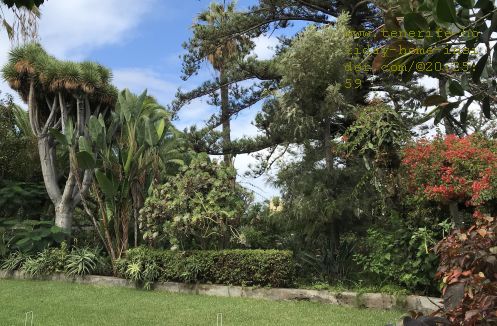 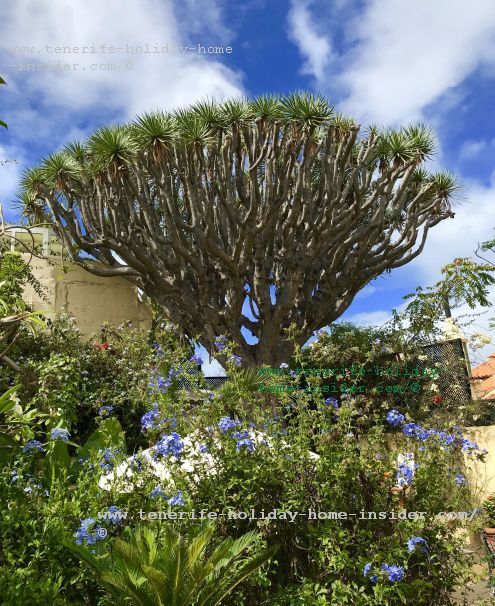 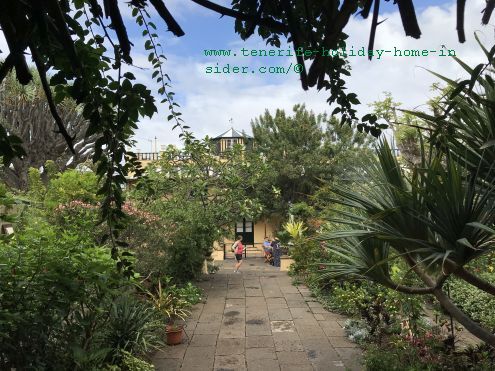 Marianne North Terrace with the ancient Mansion from 1730 at the far end. Its Azotea rooftop with a tiny lookout tower can be spotted.

Proceed to a long semi-shaded archade and explore the orchids, some of which are rare. Depicted below are the ones I liked best. Unfortunatly, there were no labels like in Hotel Tigaiga's little botanical garden.

It also remains to wonder if the four endemic Canary Islands species were among the collection. If not, one could put up some photos or prints of botanical paintings as a matter of interest, as they perhaps only thrive in a specific habitat. 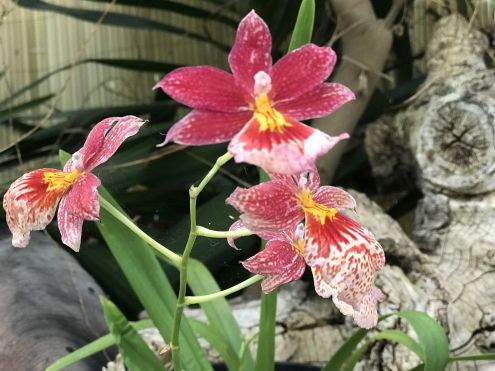 Terrestrial Orchid in red, white and yellow set off by a piece of silver grey tree trunk next to it. 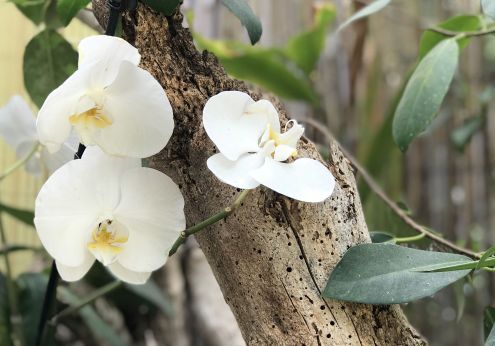 By the way, Orchids in Tenerife are a challenge to care for and to keep pest free, as many experts will confirm.

Sitio Litre opened up to the public

Around 1998, Mr. Carruthers opened it up for all to enjoy. The entrance costs Euro 4,50, as no public fonds support the venture.

Conclusion
I admit this isn't a cheap ticket. However, it is costly to maintain a project like this ancient Puerto de la Cruz private garden. The only way that it could earn extra income would be to turn it into a study and research center, as is done in a Swiss as well as in the famous Singapore Orchid garden. But that is easier said than done for a small family enterprise.
Mind, there is a day of open doors during the Festival de flores.

From Sitio Litre back to Puerto de la Cruz

About the world's largest orchid garden in Singapore here